The ongoing construction of a nuclear power plant (NPP) in Belarus’ Ostrovets is still facing vigorous criticism from both among the Belarusian public and Belarusian and Russian environmentalists and governments of neighbouring countries. The Belarusian authorities have stated they are ready to have the station’s design stress-tested to the current safety standards accepted in Europe – but the plant will not pass the scrutiny, says Bellona’s expert Andrei Ozharovsky. 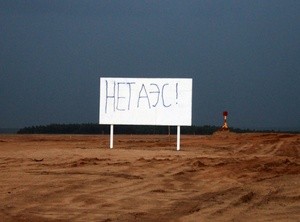 The following is a translated transcript of an interview Bellona’s nuclear expert Andrei Ozharovsky gave to the European Radio for Belarus (Euroradio) on June 24. Euroradio and Ozharovsky talked about the Ostrovets project, which was developed by the Russian State Nuclear Corporation Rosatom, and whether the safety claims made about the new plant – it will be built to a Russian design dubbed AES-2006 (for NPP-2006) – will hold true if the project is examined in accordance with the same testing standards that are now applied to European nuclear power plants.

Euroradio: Talking with us today is the Russian physicist Andrei Ozharovsky. Today, Belarus joined a number of European Union nations by announcing its willingness to undergo NPP stress tests.

The plan to build the NPP has been there for a long time now, even though it remains unclear how it will be built at this time of an [economic] crisis. And now, stress tests are going to be conducted. What are they, what does it mean? Our guest, the Russian environmentalist Andrei Ozharovsky, will tell us about it today.

Andrei Ozharovsky: Depending on what various politicians mean when they say it, this term, “stress tests for nuclear power plants,” could mean different things.

Let me tell you first about what is happening in the European Union. After the [March nuclear and radioactive] disaster at [Japan’s] Fukushima, an understanding has emerged that the contemporary safety standards are inadequate. And [that] what environmentalists had been talking about, including the Anti-Nuclear Campaign of Belarus and Russian anti-nuclear activists, can indeed happen. There can happen such a combination of external impacting factors that a nuclear power plant will turn into a radiation-spewing site that makes the territory around it uninhabitable. This is why the idea of stress tests has come up, and the European Union has so far only published the first half of the testing criteria. An independent group of experts will analyse nuclear plants’ ability to withstand this or that impact, both external and internal ones.

Nuclear energy’s dangers are gradually dawning on the world

Incidentally, a number of governments have decided not to wait for the [results of] stress tests and made the decision – a completely justified one, too, in my opinion, that atomic energy is fundamentally dangerous and that construction of new stations has to be stopped. Among those are Germany, Switzerland. Italy had a referendum recently, where people themselves, not some kind of experts, were deciding whether they needed nuclear energy or not. And you know what, they decided they could well do without it. In other words, Italy will not have nuclear power plants. That’s it, never. Because a decision made in a national referendum, it has the ultimate power of law.

So, there is at this point a group of experts, there are criteria. I believe it will be very good if it’s going to be exactly according to the European methodology that this dubious Russian NPP-2006 project that was proposed for Ostrovets NPP and was determined by whoever that might be, for whatever reasons, to be, like, the best of the best, nearly, that it undergoes stress tests.

And I am prepared to state that the Russian NPP [design] will not pass the European stress tests.

I can give you one example. Tests are like an exam, right? If you flunk one of the tasks, fail to meet one of the criteria, you haven’t passed your exam.

The list of European criteria contains the requirement [for a nuclear power plant] to withstand a plane crash. We know that the proposed Russian project will withstand, as its developers insist, the impact of a plane with a mass of 5.7 tonnes. That’s an An-2 crop-duster. And above the station, if you go to Ostrovets and look up, there are always contrails visible up there. Russian planes, Belarusian ones, from other countries, are flying westward all the time. These are planes weighing 40, 70, 100, sometimes, 200 tonnes. Basically, in other words, there is never, of course, going to be any tsunami in Ostrovets. But there is this other [scenario], the fall of a modern jet plane, that could lead to the same consequences as at Fukushima.

So, of course, if the European standards are applied, then the nuclear power plant will not pass the stress tests and the project will have to be abandoned, to everyone’s delight, I think.

Also, because the Belarusian project right now is inviting more and more questions. Lithuania has just recently forwarded its objections over the implementation of the project to the Secretariat of the Espoo Convention [on the Environmental Impact Assessment in a Transboundary Context]. They started consultations with Lithuania, [and] Lithuania is against [the project], Lithuania has not been given [complete] information. And Belarus insists on continuing with the project. Recently, a Meeting of the Parties to the Espoo Convention, the convention on transboundary environmental impact assessments of hazardous sites, took place in Geneva. A complaint was submitted there. This situation will be looked into.

And another complaint is expected to be approved soon in [Moldova’s] Chisinau, one within the scope of the Aarhus Convention on Access to Information, [Public Participation in Decision-making and Access to Justice in Environmental Matters]. You know, the Belarusian nuclear officials, they were being so obnoxious, they withheld information that was requested, that was supposed to be made available. They were burying issues under a barrage of official documents. As in, say, this Environmental Impact Assessment, there are several revisions of that. And they are all at odds with each other. In other words, it’s a total mess with the documentation there. And because this documentation will now have to be submitted for some sort of exam, apart from the conventions that I just mentioned, these documents, of course, they just won’t hold up.

Russia: Stress tests in name only

And if the Russian approach is chosen, this is very interesting, because in Russia, we have more of a PR-like approach. No meaningful scrutiny is ever done of the condition that nuclear power plants are in, but what is arranged is tours of the stations for the local community, children’s organisations, youth organisations are engaged. They are taken to [a station’s] information centre, to the canteen, where they are shown how everything is so neat and clean, and Rosatom posts these chirpy festive reports that the station has passed stress tests. Well if such a stress test is undertaken, a staged one, then, of course, this will not change anything, it won’t be good.

Euroradio: From what I understand, there are three options, that if the European standard is chosen, then the station will be a safer one, if it passes the stress tests, or it doesn’t pass the stress tests and in that case, it doesn’t get built, and the third option, if the Russian method is chosen, and then it may still be unsafe…

Andrei Ozharovsky: No. Whether the documentation passes or doesn’t pass this or that examination, it’s not going to make the station more safe or less safe. If there are changes made to the project, if the site is moved elsewhere, some other principal issues, then one can talk about safety. What is being submitted right now for an exam, for this stress test, is the documentation. This documentation is certainly absolutely not in line with the European criteria. Moreover, it’s kind of strange to examine something that doesn’t even exist in nature, because no NPP has yet been built anywhere to the NPP-2006 design that Rosatom wants to do in Belarus. Russia is only now in the process of building reactors of this design at home. So in this case, it will be even more difficult to conduct the examinations. The same work will have to be done with the documents.

Let me tell you again, both the Lithuanian Academy of Sciences, and a group of experts from Austria, who were commissioned by the [Austrian Ministry of Environment], they have already studied the documentation. And it’s all quite clear, written in black and white there, that nuclear energy proponents are lying, they are downplaying possible impact during an accident. They say, for instance, that that the contamination will not spread beyond three or five kilometres. This is, obviously, complete rubbish, a total lie. It’s been demonstrated in two countries now. So, they’ll send [the documents] to the [European Union] now, and the same conclusions will be made there, too.

Both dangerous and unwanted

The station is dangerous and the country doesn’t need it.

Such expensive sites are bought when there’s a lot of money lying around. When everything is so great with the economy that you could go splurge on such, you know, luxury items.

But I believe now is the time for Belarus to focus on something else, on using those resources that it is endowed with: renewable energy. Just think that one tenth of all the investments that are supposed to go into the nuclear power plant could cover a substantial portion of the country’s energy demand. This is what Belarus should be thinking about now!

And the stress tests… Obviously, if the documents are sent to the [European Union], the power plant will not pass the stress tests, they will have to forget about this project.