NEW YORK – Washington has offered to delay the “activation” of its proposed missile defence sites in eastern Europe which have caused a serious rift with Moscow, the US defence secretary said yesterday.

Published on October 24, 2007 by Charles Digges 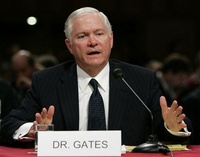 Russian officials said the proposal fell short of Moscow’s demands but described it as a "positive signal" which could be the starting point for further negotiations.

The US offer was raised when Robert Gates, the US defence secretary, and Condoleezza Rice, the secretary of state, visited Moscow last Friday, meeting Vladimir Putin in his dacha.

The proposed construction of a missile interceptor site in Poland and a radar station in the Czech Republic, ostensibly to target incoming Iranian ballistic missiles, has enraged Moscow, which believes the system could undermine Russia’s nuclear deterrent.

The issue has contributed to the deepest chill in US-Russian relations since the Cold War. The proposal threatened to upend this year’s Group of Eight (G-8) richest nations in Germany when Putin, hearing of the US plans, threatened to retarget European cities with his nuclear missiles.

Bush jockeyed to have a face-to-face summit with the Russian leader to his family’s compound in Kennebunkport, Maine, later in the summer but the talks produced few results besides Putin catching a large fish on one of Bush’s fishing boats. On returning to Moscow, both Putin and Bush ramped up their rhetoric about the shield.

First signs of thaw?
Yesterday’s announcement by Secretary Gates marked the first sign of a thaw – if not a somewhat contradictory policy to that being pursued by the White House, which said the missile defence shield must be pursued urgently.

Speaking in Prague, Gates said: "We would consider tying together the activation of the sites in Poland and the Czech Republic with definitive proof of the threat, in other words, Iranian missile testing and so on."

Gates said the proposal had not been fully worked out but added: "We would develop the sites, build the sites but perhaps we would delay activating them until there was concrete proof of the threat from Iran."

A Russian foreign ministry spokesman told the London Guardian that Moscow would only respond to offers made through "official channels". But a Russian official, speaking on condition of anonymity, said: "We believe that the outcome of the talks is promising. We think a number of ideas the Americans raised in Moscow merit careful consideration. For example, we believe there is a need for a joint discussion of the Iranian missile threat."

However, the official added that Moscow wanted work on the Czech and Polish sites to be put on hold while the issue was negotiated, and in that respect the offer "falls short of what we would like from the Americans".

Other reasonable suggestions ignored by Bush
But several reasonable proposals to avoid the current impasse, in Bellona’s view, have been tabled during the discussions, though not by members of the US administration itself. Early in the war of words, Putin suggested the US use a tracking base in the former Soviet republic of Armenia, which Moscow has leased from Yerevan.

Bush dismissed this out of hand.

On Tuesday, Stanley A Weiss is founding chairman of the Washington-based Business Executives for National Security, suggested in an op-ed piece in The Asia Times that the two counties pursue a "joint regional missile defense architecture" that includes Russia and, perhaps, Russian and American military personnel at one another’s
missile sites.”

The result of such a cooperative approach, wrote Weiss, could bring “transparency and information-sharing (that) could hasten the greatest trust-building steps of all – removing American and Russian nuclear missiles from hair-trigger alert and further reductions in nuclear arsenals, including withdrawal of US nuclear forces from Europe.”

Speaking after the Moscow talks, Sergei Lavrov, Russia’s foreign minister, had been blunter, warning that if the United States did not freeze its missile defence plans while the issue is still under discussion Russia would "take measures to neutralise the threat." These neutralising measures, according to diplomats, include retargeting European cities with Russian warheads.

Russia’s Interest in protecting Iran
Moscow apologist approach Iran and repeated failure to go along with harsh UN sanctions against Tehran stem from a tight business relationship between the two countries. As recently as two weeks ago, Putin, after a visit to Tehran, declared Iran’s nuclear programme to be energy based and peaceful, despite much evidence to the contrary.

At stake for Moscow are several new contracts to build nuclear reactors in Iran, so it is in Moscow’s interest to defend Iran’s ambitions. But Moscow is not blind to the provocation that Iran’s vague intentions hold for the West, and is happy to exploit them and position itself as the only power that is still on speaking terms with Tehran.

This bolsters Moscow’s sense of itself as a superpower: as the only possible leash on Iran, it is the bridge between east and west. Likewise, the situation offers a revenge strategy for US military encroachment on former Soviet Interests, who, like Poland, are now members of NATO.