Despite international entreaties, threats and incentive packages, the hermetic and Stalinist North Korea declared on Monday that it had successfully conducted its first nuclear test and asserted a claim to be the world’s newest nuclear power and drawing intense international condemnation.

Published on October 9, 2006 by Charles Digges

“Can you imagine – it took the Security Council only 30 minutes to come back with a unanimous condemnation of the test,” said Bolton. “That is certainly record time.”

The underground nuclear test has apparently been verified by various seismological institutions throughout the world, which registered differing levels of a strong vibration in the area of the Korean sub-continent at 10:36 a.m. Korean time (1:35 a.m. Greenwich Mean Time) Monday.

The United Nations (UN) Security Council was in emergency session within minutes of the news, diplomats said, and international condemnation of the apparent nuclear test rained in throughout on North Korea throughout the day not only form the Security Council members, but other European Nations, Japan and South Korea.

China’s condemnation holds special importance as Beijing does $2 billion worth of business with North Korea a year, which puts the country in a unique negotiating position. Yet, Pyongyong has refused to return to the six-party diplmatic tallks with its Asian neighbours, Europe and the United States. 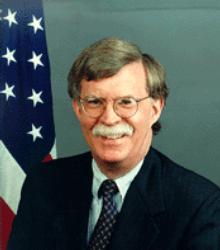 Timeline of events
The South Korean government informed officials in Washington that an explosion occurred seconds after it registered the vibrations. Minutes later, an effusively smiling anchorwoman with North Korea’s official Korean Central News Agency (KCNA) made the almost surreal televised announcement of the test, calling it "a historical event that has brought our military and our people huge joy."

Kim Jong-il, North Korea’s reclusive dictator, had no personally broadcast remarks on the blast. There are few biographical details available about him, aside from the fact that he was born to North Korean leader Kim Il-Sung, and inherited the reigns of power from him.

He is also said to be a fan of James Bond films and the "Friday the 13th" series. Official North Korean news sources also report that Kim Jong-il wrote 1,500 books during his college career, which would mean he was putting out more than one book a day.

The head of South Korea’s intelligence agency, Kim Seung-gyu, hinted that it was possible North Korea would soon carry out a second nuclear test in the near future, Seoul’s Yonhap news agency quoted one South Korean lawmaker as saying.

The North Korean claim of the successful nuclear test, which was viewed by western nations with some scepticism this morning, became more and more veracious as various nations weighed in with their independent data.

Australian seismologists said they registered a tremor corresponding to the detonation of a one-kilotonne nuclear explosion. Russia reported a higher figure of five to 15 kilotonnes – far higher that Australia’s measurements and equal, at worst, to the 15-kilotonne detonation that leveled Hiroshima. In all, the denotation reached 3.6 to 4.2 on Richter scales around the world.

Ability to detonate rather than strength real message from Pyongyang
But Steven Albright, a former US weapons inspector said that it was not so much the strength of the detonation but the fact of the detonation that was the real issue.

“They weren’t testing to see if they could do it – they already knew how to build a nuclear device,” said Albright on CNN. “They did this to send a message that they are now capable of building weapons.”

But what kind of weapons North Korea can build, said Albright remains a “murky area.” It is unlikely that North Korea possesses the technology to build a nuclear warhead that is light enough to fit on a missile, he said.

But North Korean has been buying and experimenting with missile technology from China for years, and could possibly build an airborne device that could hit Japan, though not the United States – North Korea’s key enemy in the nuclear dispute.

Bush administration’s mistakes brought about nuclear test
According to Albright, the Administration of US President George Bush, Jr. made a serious error when it refused to extend talks with the already self-isolated North Korea. Further errors were made by the US administration when it began to pressure North Korea with threats of sanctions.

Albright added that the international community knows that North Korea has enough separated plutonium to build from four to 13 nuclear weapons. A tour of North Korea’s nuclear facilities by the UN’s International Atomic Energy Agency (IAEA) confirmed this, said Albright.

“What remains unknown is how much plutonium they have separated and how much they have ready for nuclear weapons,” Albright said.

Much of the North Korean nuclear know-how is suspected to have come from Abdul Qadeer Khan, the rogue Pakistani nuclear scientist who is suspected of selling nuclear secrets to many nations including Iran, Albright added.

Conflicting intelligence
But while Albright and the UN Security Council are treating this as the first true nuclear test since India and Pakistan both detonated atomic devices in May 1998, South Korean intelligence officials have voiced some doubt.

According to anonymous South Korean sources, the same vibrations could have been caused by detonating several thousand tonnes of TNT in the spot where international seismologists detected the tremours. Furthermore the South Korean government reported no rise in its standard background radiation after the North Korean explosion took place.

But that expected rise in radiation could be some hours in the coming as the test was conducted underground, said Albright. Furthermore, other states, acting on their own intelligence, have issued round condemnations of what they term a nuclear weapons test.

This suggested to Security Council diplomats interviewed for this article that Seoul’s intelligence was acting more on hope than on fact.

John Senssor, former US Ambassador to China, who had frequent interactions with North Korea, told CNN the test was carried out because “North Korea was sick of being lumped into the vague category as a member of the “axis of evil” and wants to be taken seriously as a nuclear threat.

The North Korean diplomatic mission to the UN said that, rather than condemning North Korea, the west should celebrate its scientific achievement.

“The United States should stop its ridiculous accusations and celebrate the DPRK’s (Democratic Peoples’ Republic of Korea’s) scientific advances,” a member of North Korea’s diplomatic mission to the UN said in broadcast remarks.

But the celebrations are not on the calendar of any Security Council nations.

Chinese authorities immediately condemned the test. North Korea "has ignored the widespread opposition of the international community and conducted a nuclear test brazenly on October 9," China’s Foreign Ministry said in a statement on its Web site, Reuters reported.. "The Chinese government is firmly opposed to this."

In its condemnation of the test, China said it would consider sanctions that would be devastating to North Korea. China is responsible for half of the food aid to the hermetic country and almost all of its oil imports.

Russia’s President Vladimir Putin also condemned the tests saying: “Russia deplores the acts of North Korea and its assertions because the country is now an added hazard to nuclear non-proliferation.

But the leader of the nation that fears a nuclear North Korea the most spoke out strongly during a visit to Seoul today.

In a news conference in South Korea’s capitol, visiting Japanese Prime Minister Shinzo Abe said the possession of nuclear weapons by North Korea "greatly threatens the northeast Asian region" and the rest of the world. Combined with North Korea’s development of longer-range ballistic missiles, he said, the testing of a nuclear weapon constitutes a "major threat" that extends "beyond northeast Asia."

"We are now in a new era of nuclear threat," Abe said after meeting with South Korean President Roh Moo Hyun. "This North Korean nuclear test is a great challenge to us, and the international community must take a firm stand on this challenge." He said discussions are underway on "strict actions" in response, but he declined to elaborate.

Roh said the test was "unacceptable." He said South Korea would react "sternly and calmly."

According to Iranian diplomatic sources, who spoke on the condition of anonymity, Tehran is carefully monitoring the North Korean situation, especially as it relates to Washington’s reation.

“So far – as in the past – we have heard blustery rhetoric, but no plan of action against (Pyongyang)” said an Iranian nuclear official who asked his name not be use on the grounds that he is not allowed to discuss the North Korean situation to Reuters.

“The same rhetoric applies to the Islamic Republic, but the US is looking for any excuse to pull the trigger on us. This has not been the case with North Korea, which now has proven weapons capabilities.”