ElBaradei said the International Atomic Energy Agency, or IAEA, had reached a “broad sense” at a meeting in Vienna “that made it clear that Iran should (accept a new protocol for inspections) without any conditions.” 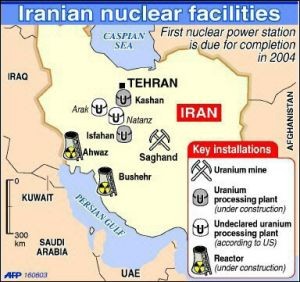 But Ali Salehi, the representative to the IAEA from Iran—which is on the IAEAs board of governors—told reporters that there was no consensus among the agency’s member states on whether Iran should unconditionally accept tougher inspections and that only "some countries" on the board held that view, according to Reuters.

Since December, it has been known that Iran is constructing a uranium hexafluoride gas enrichment facility in the city of Natanz, with some 1000 centrifuges already installed. It was further confirmed in ElBaradei’s troubling report two weeks ago, which was widely leaked to the media, that Iran plans to extend the Natanz project to eventually include some 50,000 working enrichment centrifuges—enough to enrich uranium for some 10 to 12 bombs a year. ElBaradei’s report also revealed Tehran’s plans to construct a 40-megawatt experimental reactor near the city of Arak, which will produce plutonium—another route to nuclear weapons. An Iranian dissident group also recently reported that Iran is allegedly operating two secret uranium enrichment plants.

The widely leaked report also showed that Iran had imported 1.8 tonnes of uranium from China in 1991 and processed uranium metal from it. Neither the import nor the processing of the uranium metal—which can be used in bombs—were reported to the IAEA as required by the agency’s Safeguards Agreement. And recently, Iranian officials barred inspectors from taking environmental samples at the Kalaye Electrical Company—a site alleged to be a secret uranium enrichment plant.

Iran is also building—with Russia’s help—an $800m, 1000-megawatt light water civilian reactor in the port city of Bushehr. This reactor, just as are the revelations in ElBaradei’s report, is a thorn in Washington’s side, which has long accused Iran of secretly developing a nuclear weapons programme, partially under cover of the Bushehr reactor.

In spite of the controversy over the Iranian nuclear programme—which has caused even Moscow, Iran’s long-time supporter in its nuclear initiatives, to have its doubts—the Russian government has stated that it will continue to ship nuclear technology, including fresh uranium fuel assemblies, to the Bushehr site, a spokesman from the Russian Ministry of Atomic Energy, or Minatom, said this week.

During this week’s IAEA meetings, the US had sought a resolution that would condemn the Iranian nuclear programme and also threaten to refer the matter to the UN Security Council unless Iran became more transparent in its nuclear dealings. Such a move would have been almost unprecedented for the IAEA, which has traditionally ruled by consensus and has avoided taking action on the basis of a majority vote, as a resolution would have required.

"ElBaradei is also thought to have been reluctant to refer the matter to the Security Council at this stage, since the IAEA has not yet completed its scientific research into the Iranian programme," one diplomat from a non-Western country, who requested anonymity, told Bellona Web.

"We don’t want Iran to shut its doors completely at this stage," the diplomat said.

The IAEA’s Statement
Thursday’s closing statement from the Kuwaiti chairwoman of the meeting of the IAEA’s 35-nation board of governors urged Iran to "promptly and unconditionally conclude and implement an additional protocol to its Safeguards Agreement" that would allow for inspections of all sites, including those not declared by Tehran, according to the text of the statement, obtained by Bellona Web.

"The board shared the concern expressed by the director general (ElBaradei) in his report at the number of Iran’s past failures to report material, facilities and activities as required by its safeguards obligations," the statement continued.

The statement noted "Iran’s reaffirmed commitment to full transparency," and said the IAEA expected to be granted "all access deemed necessary by the agency" to prove to the world that Tehran was not engaged in creating nuclear weapons. "Noting that the (uranium) enrichment plant (near Natanz) is under IAEA safeguards, the board encouraged Iran (…) not to introduce nuclear material at the pilot enrichment plant as a confidence-building measure," the statement said.

The board also urged Iran to allow inspectors to take environmental samples at the Kalaye electric plant. A report on the progress of Iran’s activities, and the status of the two newly-revealed secret enrichment facilities, alleged to exist by Iranian opposition, is expected in September, one Western diplomat, who requested anonymity, said.

But the release of the report by September "depends on the accessibility and cooperation shown by the Iranians," he said. "We will just have to look at their behaviour."

Another diplomat who was familiar with this week’s meetings of the agency’s board of governors said: "The statement by the board was a reprimand, not a condemnation. But it was more than I expected."

Statement Fell Short of US Wishes
Nonetheless, the statement by the IAEA’s board of governors fell well short of the United States, which demands that the agency use stronger language to force Iran to accept more intrusive inspections and to make clear that the world community would not accept construction of a nuclear weapon by Iran.

The United States had indeed been lobbying intensively in recent days for a resolution that would clearly condemn Iran for its alleged clandestine nuclear weapons programme.

During this week’s meetings by the IAEAs board of governors, US ambassador to the IAEA Kenneth Brill took a hard line, warning that research into Iran’s nuclear programme "will point to only one conclusion: that Iran is aggressively pursuing a nuclear weapons programme," according to another diplomat who was close to the meetings.

Addressing the board, Brill described the nuclear watchdog’s recent findings on Iran as "deeply troubling" and suggested they showed Iran was engaged in clandestine activities.

However, the US delegation eventually backed away from insisting on a resolution in order to preserve a common platform with European governments, some of which argue that Iran should be given the chance to adopt the 1968 Nuclear Non-Proliferation Treaty’s Additional Protocol—which would force Iran to show greater transparency, the diplomat said.

Despite the lack of an IAEA resolution, the US State Department Thursday greeted the IAEA’s request that Iran allow stricter inspections as "positive."

"This is a very positive statement, reflecting the concerns that we have been raising about Iran’s programme," State Department spokesman Philip Reeker said.

Iran’s Reaction
Nevertheless, the Iranian government angrily rejected the US criticism voiced during the IAEA meeting—as well as the statement from the IAEA board—arguing that its nuclear activities were purely civilian and insisting that it had every right to pursue them under the Non-Proliferation Treaty. It also claimed that plenty of other countries had made minor breaches of the treaty without attracting the same level of censure, a spokesman for Iran’s Ministry of Foreign Affairs said Thursday.

Iran was particularly "put off by the part of the boards statement that urged it to promptly and unconditionally conclude and implement an additional protocol to its Safeguards Agreement," said the Western diplomat.

Iranian representative Selehi said Iran did not accept this. "We have dissociated ourselves from that part of the statement," the diplomat quoted Selehi as saying.

Selehi said Iran was joined in this by some 15 non-aligned countries also on the IAEA board.

However, Selehi said Iran would look positively on a new protocol if there were to be "mutual understanding" with the IAEA, according to the diplomat. Selehi did not comment further on what that mutual understanding had to include.

US and Britain hope to increase the pressure on Iran by bringing forward the next board meeting to the next few weeks, instead of waiting for the scheduled date in September, a spokesman for the British Foreign Office told Bellona Web Thursday.