In a Monday statement to the Board of the UN’s nuclear watchdog agency, its chief, Dr Mohamed ElBaradei announced that Iran has nearly completed a uranium enrichment site near the city of Natanz, but did not respond to US allegations that the site will give the Islamic Republic the capability to produce nuclear weapons. 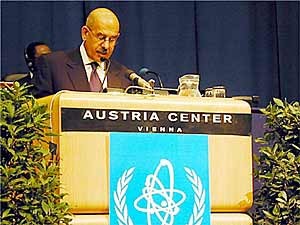 On the same day, Iran’s government controlled newspaper, the Teheran Times, suggested in an editorial that Iran close its doors to further visits from the UN’s International Atomic Energy Agency, or IAEA, until newly imposed US sanctions against the country are lifted, signalling the first official indication the country is prepared to use the status of its nuclear programme as a bargaining chip in international diplomacy. Iran’s foreign minister reiterated this position in a press briefing, according to the paper.

Monday’s statement by ElBaradei was anticipated to shed more light on the nature of the hexafluoride gas uranium enrichment centrifuges that Iran is building near Natanz.

But ElBaradei was more brief than expected in his presentation, and avoided altogether the question of whether or not he suspected the centrifuges would be put to use for implementing a nuclear weapons programme — something the US has long suspected but which Iran denies.

Russia, which has building a light-water reactor for Iran in the port city of Bushehr, had — until last wee — defended Iran’s nuclear projects, saying the country did not have the capability to produce nuclear weapons. But after ElBaradei’s late February visit to Iran — during which he saw 160 working enrichment centrifuges and materials for the completion of some 5,000 more — Moscow finally backed away from its claims, and admitted it did not know the extent of Teheran’s nuclear ambitions.

Adding further to western fears about Iran’s nuclear program, President Mohammed Khatami recently announced Iran is mining uranium, and is developing technology to reprocess spent nuclear fuel for plutonium. This, coupled with the enrichment sites in Natanz, gives the country an largely indigenous capability to produce nuclear fuel or weapons.

IAEA’s statements on Iran brief
ElBaradei in his statement to the IAEA about his visit to Iran said "my colleagues and I were able to visit a number of facilities — including a gas centrifuge enrichment pilot plant at Natanz that is nearly ready for operation, and a much larger enrichment facility still under construction at the same site," Reuters reported.

This larger facility — whose existence was initially revealed by satellite photos given to the Pentagon in December by an Iranian exile group called the National Council or Resistance of Iran — is being built partially underground and is surrounded by walls some three metres thick, in an apparent effort to thwart a military assault. The satellite photos also showed another facility near the town of Arak which is meant to produce heavy water — another route to an atomic weapon based on plutonium.

ElBaradei did not mention any findings regarding the Arak site during his Monday statement, though IAEA officials say they have visited the site. Instead, ElBaradei reiterated his call to Iran to help dispel doubts about its nuclear ambitions by signing up to the IAEA’s "Additional Protocol" which would allow inspectors freer access to Iran’s nuclear sites with little prior warning.

US intelligence and the Iranian resistance group said last week that Iran may already be enriching uranium for weapons purposes at another facility that Teheran has reported is a watch factory, which would constitute a direct breach of the 1973 Non-Proliferation Treaty, of which Iran is a signatory. ElBaradei made no mention of these claims Monday, and spokesmen at the IAEA in Vienna would not discuss them.

Bush renews sanctions on Iran
Last Thursday, US President George Bush — who is preparing for a massive assault on Iran’s neighbour Iraq — renewed 1995 US sanctions on Iran that prohibit US oil firms from doing business in Iran.

In a news article in the Teheran Times — which accompanied the editorial suggesting IAEA access be restricted until these sanctions are repealed — Iran’s Foreign Minister Hamid-Reza Assefi said that "Iran is prepared to discuss subjecting its nuclear programme to tighter safeguards in return for technical assistance from the international community."

"We are ready to discuss and negotiate, but we need to know what benefit the Islamic Republic would get from other nations," he said.

The Teheran Times’ editorial rejoined that if Iran is to open its doors to further inspections, it must be assured that the international community will pressure the United States to lift Bush’s sanctions. The editorial said that Iran was being dealt with in an "unfair" and "unjust" fashion despite its cooperation with the IAEA.

Iran understands diplomatic weight of nuke programme
While Iran has made no public movement to withdraw from the nuclear Non-Proliferation Treaty, which North Korea — which along with Iraq and Iran is labelled as part of the "axis of evil" by the Bush Administration — recently did when it started reprocessing spent fuel rods for plutonium.

But the new rhetoric out of Iran suggests that Teheran understands that the mystery surrounding the nature of its nuclear ambitions — and its threats to cloak its efforts further — is a powerful diplomatic tool.

With certain war looming in Iraq, the US State Department’s position on the Iranian statements was unclear Tuesday.

When complete, the Natanz site is expected to operate 5,000 gas enrichment centrifuges, enough to produce at least one nuclear weapon per year.