Russia’s Atomic Minister Alexander Rumyantsev has announced the signing of an agreement guaranteeing the return of spent nuclear fuel (SNF) from Iran’s Bushehr reactor, ending — at least in word — months of concern over whether Iran will be able to reprocess for plutonium the fuel it will run through the plant.

Published on January 16, 2003 by Charles Digges 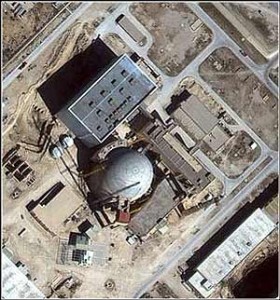 But concerns about a possible weapons programme in Iran — which Russia may be assisting in secret — nonetheless remain after the publication of satellite photos last month that purport to show two facilities that would be crucial to producing nuclear weapons. One site is thought to be a facility to produce highly-enriched uranium. The other, a heavy-water reactor, would be instrumental in plutonium production.

Russia has denied it has had any hand in helping construct those facilities, which have been known to the Pentagon for over a year. Iran has likewise denied that the sites are part of a weapons programme.

However, officials from the US Department of Defense (DOD), speaking anonymously with Bellona Web, have said Russia is complicit in the new sites, which, they say, are definitely part of a nuclear weapons effort. Russia has flatly denied this.

The announcement of the agreement finally came Monday during an interview with Rumyantsev on Russian Ekho Moskvy radio while he was discussing Iran’s apparent adherence to conditions spelled out in guidelines imposed by the UN’s nuclear watchdog, the International Atomic Energy Agency (IAEA).

"Iran, by the way, has signed all necessary agreements and has obligated itself to upholding all international guarantees," Rumyantsev told Ekho Moskvy. "Iran undergoes 60 IAEA inspections a year, and there are 52 weeks a year, meaning that at least once a week the IAEA checks Iranian activity."

Indeed, an IAEA team is scheduled to visit the two newly revealed sites on Feb. 25 to install safeguards and assure that the facilities meet the criteria outlined in the Non-Proliferation Treaty.

The issue of Iranian spent fuel issue swelled last June when Greenpeace publicized a leak of government documents confirming that the seven-year-old Minatom contract contained nothing about the return of spent fuel to Russia.

Since then, Minatom has made several public promises and set itself numerous deadlines by which to secure the agreement. But all of these deadlines came and went without progress, lending to the impression that Moscow didn’t much care about the proliferation risk that leaving the SNF in Iran might cause.

A spokesman for the Ministry of Foreign Affairs, which was charged with producing the agreements for Iran to sign, confirmed Tuesday that Iranian officials have signed a deal for the return of Bushehr’s SNF. The spokesman denied that the Ministry had dragged its feet in getting the signatures, saying the agreement required several diplomatic revisions before the Iranians would sign.

Russia’s cooperation with Iran in the $800m Bushehr reactor — which is slated to come online in early 2004 — has proved to be a sore spot in relations between Moscow and Washington.

The administration of President George Bush — which has labelled Iran, along with Iraq and North Korea as part of what it calls the "axis of evil" — has repeatedly urged Russia to drop all cooperation with Tehran. Russia has, however, responded by publicly acknowledging its interest in building up to five more reactors in Iran.

Earlier this week, Alexander Vershbow, US Ambassador to Russia, gave a cool endorsement to the SNF return plan in an interview with Russian news agency Interfax, saying: "The USA welcomes the agreement on the return to Russia of spent nuclear fuel from the nuclear power plant at Bushehr."

He quickly underscored US concerns, though, that Russian know-how in weapons technology would be spread to Iran.

"Russian-Iranian cooperation — even within the framework of the IAEA — presents itself as a risk because Iranians will receive the possibility to produce weapons of mass destruction," Interfax quoted Vershbow as saying.

"The construction of more nuclear stations in Iran with Russian help would be very dangerous."

Vershbow put it even more specifically when he explained that American fears were founded on "the appraisal that Iran plans to develop its nuclear capability and produce nuclear weapons." He repeated Washington’s offer that Russia could find more useful and lucrative cooperation in peaceful nuclear pursuits with the United States if certain "misunderstandings" were cleared up between the two countries.

But Minatom shows no signs of turning back on deals in Iran — moreover, Rumyantsev during his interview even hinted at the possibility of building reactors in North Korea if Pyongyang realigns itself with IAEA conditions.

Minatom’s more immediate sights, though, seem to be set on Iran and Rumyantsev said Monday that "continuing the construction of atomic power plants in Iran" will be among the Russian energy sector’s "main areas" of attention in 2003.

What shape this attention will likely take was articulated last summer when Moscow announced the formulation of a $10bln economic cooperation plan with Tehran. This plan would include the construction of at least five more nuclear reactors in Iran. The announcement elicited harsh criticism from the United States, and Russia appeared, for a time, to back away from the plans.

But after a visit to Tehran last month, Rumyantsev rekindled the idea of building several more reactors in Iran and confirmed even more strongly Minatom’s interest in building a second reactor at Bushehr.