Russia’s Atomic Energy Minister Alexander Rumyantsev arrived Sunday in Tehran for inspections of the controversial Bushehr reactor that Iran is building with Russia’s help, but it remained unclear whether he would be collecting a long promised contract obligating Iran to return spent nuclear fuel (SNF) Russia once the plant goes on line.

Published on December 24, 2002 by Charles Digges 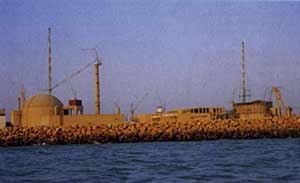 What is clear is that Rumyantsev intends during his 4-day-visit to discuss quickening the tempo of construction of the $800m, 1,000 megawatt reactor so that it comes on line fully by 2004, as well as to lay groundwork for the construction of up to five more Russian constructed reactors — a plan the Russian Atomic Energy Ministry, or Minatom, announced over the summer, but appeared to back away from in the face of harsh criticism from US Energy Secretary Spencer Abraham.

It is also clear that Rumyantsev will not be inspecting two new nuclear sites in the Iranian cities of Nantanz and Arak, which were revealed by commercial satellite photos last week, and which American intelligence community has alleged are facilities for the production of nuclear weapons that were built, according to a US Department of Defence official, with the aid of the Russians. Tehran has denied the new sites serve weapons purposes and Russia has denied it had a hand in helping build them.

On Friday, previous to Rumyantsev’s departure, he told the Nuclear.ru website — which, according several Russian media watch-dogs, is one of several websites with close ties to Minatom — that the long delayed signing of an agreement on the 100 percent return of Bushehr’s SNF, which Rumyantsev himself said early last week was scheduled for this trip, was nothing more than "conjecture of the press."

On Sunday, however, after his arrival in Iran, he was quoted by the Associated Press, Tehran Radio and United Press International as saying "the main purpose of my visit is to expedite the completion of the Bushehr nuclear power plant and to finalize an agreement on the nuclear fuel for storage and processing in Russia."

The AP and UPI articles went on to report that Rumyantsev would, in fact sign, the deal on the return of the SNF, as Rumyantsev and other nuclear officials in Russia have been promising since this summer, when a leak of internal government documents to Greenpeace revealed that no such provision existed in the 7-year-old construction contract. Should the SNF remain in the hands of the Iranians — a scenario that gives Washington cold sweats — it could possibly be reprocessed for plutonium, a path toward the creation of a nuclear weapon.

But despite nearly a dozen public statements Rumyantsev has made promising to secure the return of the fuel, and dozens more statements from Moscow and Tehran that their nuclear cooperation is entirely peaceful, Minatom, according to environmental groups — and even some sources within Minatom — has adopted a foot-dragging policy toward inking the necessary guarantees that the fuel will be returned.

A spokesman for the Minatom press office on Monday refused to discuss the contradiction between Rumyantsev’s statements to Nuclear.ru and those that appeared in Western press agencies, and said the Minister himself would be holding a press conference on Dec. 27 "that would clear everything up."

But another Russian government official who is knowledgeable about Minatom’s attempts to forge an agreement about the Bushehr SNF told Bellona Web confidentially on Monday that he "would not expect the Minister to have made any more progress than we have observed since this summer."

The official added that Rumyantsev’s current approach to the SNF agreement "generally does not correspond with his earlier promises." Earlier this fall, Rumyantsev pledged that the Bushehr plant would not go into service until he had a "legally binding" contract that Iran would return the spent fuel to Russia.

"Now, Rumyantsev has gone to Iran to examine ways to speed up the completion of Bushehr, and has made two completely contradictory statements about whether the SNF contract will be signed," the official said.

"This confusion, obviously, has undermined his commitment to that earlier promise."

This sluggishness and vagueness, coupled with the satellite photographs showing a heavy-water reactor, which would be critical for producing plutonium, in Arak, and a separate facility in Nantanz for the production of bomb usable highly enriched uranium, appears to fly in the face of Moscow and Tehran’s denials that Russia is assisting Iran in the creation of a nuclear weapons program.

Still more evidence to that effect was revealed earlier this week by the Washington Post, which reported that, over the past five years, Iran has used a web of phoney trading companies to obscure its increasingly sophisticated drive to secretly build large facilities that could produce the materials needed for nuclear weapons.

This was underscored in a recent interview with Ivan Blokov, campaign director of Greenpeace Moscow, which has closely monitored Russia’s nuclear assistance to Iran.

"If Iran is allowed to keep even some of the SNF from Bushehr, they could easily obtain equipment necessary for reprocessing it to get plutonium as well as any other equipment they would need to develop a nuclear weapons programme," he told Bellona Web.

A spokesman with the US Department of State, who spoke on the condition of anonymity with Bellona Web on Monday, agreed.

"Our position has always been that Russia should cease all assistance to the Bushehr project, but recent developments point out that even that may not be enough — at this stage they are far along the road to a weapons programme," the official said.

Just how far Iran has come will presumably be revealed when Mohamed Elbaradei, head of the United Nations’ International Atomic Energy Agency, or IAEA, visits the two sites shown in last week’s satellite imagery, an IAEA spokesman wrote in an email interview. Elbaradei will be accompanied by specialists who plan to set up "safeguards" at the sites to ensure no material is diverted for use in weapons programs.

Another official at the Vienna-based agency told AP Thursday that the satellite photos of the Nantanz uranium enrichment site show it is partially covered by concrete and earthworks. But the official said that did not necessarily mean Tehran had something to hide.

"Given what the Israeli’s did to the Iraqi reactor, I might consider hardening my facility as well, even for peaceful purposes" the offical said, according to AP. Israeli air strikes destroyed Iraq’s Osirak nuclear reactor in 1981. The IAEA official also said the satellite imagery of Nantanz and Arak indicated they could produce heavy water and be used for the enrichment of nuclear fuel, procedures applicable for a weapons program.

But, according to AP, the official noted that "Iran has the right to have such facilities as long as at the appropriate time it declares them to us the IAEA and puts them under safeguards, and Iran has declared to us that they will do so."