Russia’s Nuclear Energy Ministry, Minatom, is finally drawing up legally binding documents to insure the return of spent nuclear fuel from the reactor it is building in Bushehr, Iran, that it expects will be signed by the end of August, top Ministry officials have said. 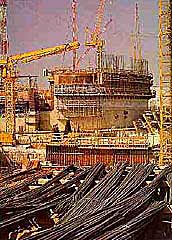 The issue of reclaiming the spent nuclear fuel from the $800 million reactor on the Persian Gulf — which is expected to go into service in 2003 or 2004 — became a heated issue last month when Ministry documents leaked to Greenpeace and shown to Bellona Web revealed that Minatom had no legally binding agreement for the spent fuel’s return in place.

When SNF is reprocessed, it yields plutonium that can be used in making nuclear weapons, and the United States has long contended that Russia’s construction of the civil plant is cover for the development of a nuclear weapons program in Iran.

Western concerns reached a fever pitch late last month when Russia announced sketchy plans to build another five reactors in Iran over the next ten years — plans Minatom has somewhat toned down after scathing criticism from US Secretary of Energy Spencer Abraham, who visited Moscow days after the plans were revealed.

First Deputy Atomic Minister Lev Ryabev on Thursday told Bellona Web that Minatom has drawn up a packet of documents that will insure the fuel’s return to Russia “so that Iran cannot use the SNF for any other purposes.”

“This is a civilian project, as we have said many times, and we are doing everything possible to guarantee that no possibility for manufacturing weapons can be realized,” he said.

But neither Ryabev nor First Deputy Atomic Minister Valery Lebedev would provide any more specifics about the plan — for instance, whether Iran will be charged to return the fuel to Russia as part of Minatom’s plan to reap billions in SNF imports, or precisely when the contract would be signed.

“We expect it will be signed by the end of August, but whether we will be charging or not we cannot say,” said a spokesman for Lebedev. Ryabev was equally vague, saying: “There is still much to be discussed regarding this power bloc.”

A spokesman for the US Department of State told Bellona Web that the announcement of binding documents on the fuel’s return was “a positive step.” But the spokesman emphasized that the United States is “still opposed to this project and we will be monitoring it carefully.”

Speaking at a press conference earlier this week, Ryabev repeated the non-committal stance on building more reactors in Iran that Minatom adopted after a dressing-down by Energy Secretary Abraham, who, while visiting Moscow, became the highest ranking US official to publicly suggest a tie between the Bushehr plant and a possible nuclear weapons program in Iran.

He added, however, that “the most realistic follow-up of the cooperation would be to
complete the second power generating unit of the Bushehr plant. But, so far, there are no corresponding agreements or documents.”

Ryabev repeated that there was “no military cooperation between Russia and Iran in the nuclear area,” Interfax reported. But he criticized the American stance on the reactor project as unfounded, saying: “There is only criticism, and when you ask for documents to prove this concern, no such documents are made available. Only an
emotional call to stop this cooperation follows,” the agency quoted him as saying.