KIRKENES, Norway – Economic development in this northerly Region, transportation improvements, and environmental preservation were issues on the agenda as the Barents Summit opened on Tuesday.

Published on June 3, 2013 by Anna Kireeva, translated by Charles Digges

The two-day Summit, whose participants came from all over the Barents region, opened Tuesday under ragged sheets of rain in the border town of Kirkenes – to say nothing of air exceeding the maximum permissible concentrations of pollution by four times thanks to the Kola Mining and Metallurgical Company (Kola MMC), a daughter company of Norilsk Nickel on the Russian side.

The Prime Ministers of Russia, Norway, Sweden and Finland along with Ministers of other countries are marking 20 years of cooperation in the Barents Region, and approved the second so-called Barents Declaration.

“Today is the 20th anniversary of Barents cooperation, which has brought concrete historic results,” said Norwegian Prime Minister Jens Stoltenberg as he opened the summit.

Stoltenberg said that during these two decades, cooperation in the Barents has made it possible for Russia and Norway to restore and guarantee the growth of the cod population and tackle illegal fishing. The two countries have also signed various agreements on dividing sea demarcation lines.

“today we adopt a new Kirkenes Declaration,” said Stoltenberg. “We must put forth strong efforts in the sphere of environmental protection and reasonably approach the use of natural wealth of the region.”

The prime ministers of all Barents region countries focused the lion’s share of their attention on continued economic growth in the Barents region as well as environmental preservation.

Russian Prime Minister Dmitry Medvedev, whose arrival in Kirkenes was greeted by protests of Russian and Norwegian environmental activists who unfurled banners reading “Nature and Human Rights,” spoke about the development of the Northern Sea Route, a controversial shipping route along Russia’s northern border between Europe and Asia, and cooperation on Arctic shelf projects.

“We have good prospects for further cooperation,” said Medvedev in his remarks to the summit. “Over the last three years, the volume of cargo traversing the Northern Sea Route has grown by 10 times.”

Medvedev said that: “Two or three years ago, freight turnover along the passages of the Northern Sea Route was some 30,000 tons per year, but we are preparing for as much as 10 million tons if not more.”

Nils Bøhmer, Bellona’s general manager, said he was surprised that no one during the course of the summit mentioned the ever-worsening conditions for Russia’s environmental non-government organizations. 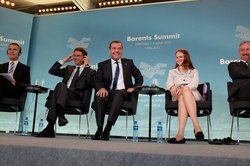 “The summit places a large accent on the development of the Northern Sea Route and the oil and gas complex, but this activity brings with it an increase on the ecological load on the environment,” he said. “I am afraid that the focus on economic development in the absence of the independent voice of environmental organizations could lead to big environmental problems in the Barents region.”

Vitaly Servetnk, an activist from the Kola Ecological Center, who took part in the protests 20 meters from where the summit was held said that the Barents region must be kept ecologically clean and safe, and it should be a region where human rights are respected and where civil society can operate without threats from the government. The Kola Ecological Center has received a notice of violation of the new federal laws demanding that NGOs who receive foreign funding and engage in vaguely defined “political activity’ must register themselves as “foreign agents.”

The political activity of the Kola Environmental Center consists of wording in its charter concerning working with lawmakers to improve environmental legislation.

“We think that the priorities for cooperation in the Barents region and the Arctic should be in the interest of the environment and human rights, not the political and economic interests of specific countries or interest groups – I would even say ‘Politics out of the Arctic,’” said Servetnik. “Cooperation between societies, regardless of borders, must be directed toward preserving the priceless but vulnerable northern environment, as well as people’s fundamental rights.”

According to official date from the Murmansk Department for Hydrometeorology and Environmental Monitoring (or Rosgidromet in its Russian acronym), emissions of polluting substances from the Kola MMC were on Tuesday, the day before the UNEP’s World Environment Day, at four times the maximum permissible levels.

The issue of cross-border pollution was raised several times at the summit.

Carl Bildt, Sweden’s minister of foreign affairs, said that despite a number of accomplishments within the framework of Barents cooperation, “We have not succeeded in achieving serious results in reducing emissions of pollution from Norilsk Nickel,” which is located in immediate proximity from the nexus of the northern borders of the Nordic nations.

“We all recognize the necessity and demand of further work in this direction,” said Bildt.

Norway’s Stoltenberg also noted that cooperation on environmental issues have shown progress in a number of areas: A large degree of transparency has been achieved in the areas of fishing and nuclear waste handling.

“However, in issues of sulfur dioxide emissions [from the Kola MMC] we have made practically no progress,” said Stoltenberg. “The emissions are practically at the same level as they were 10 years ago.”

The Kola MCC issue forced Russia’s Medvedev to address some uncomfortable questions in a vague and evasive manner.

“Of course, questions of accruing environmental damage and emissions reductions are the most complex questions,” said Medvedev. “But we continue to make progress in this direction and that is already good.”

Bellona will continue to follow the progress of the Barents Summit.