Dropping an atomic bomb any city in the world would destroy the possibilities for humanitarian help, decimate infrastructure, wreck the environment, cause countless deaths and result in a crisis that would take decades to recover from, according to panelists at a symposium on nuclear weapons hosted by Norway’s Ministry of Foreign Affairs that began in Oslo today.

Published on March 4, 2013 by Charles Digges 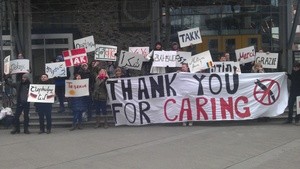 And the effects do not end there – as bourn out by conference participants who survived Hiroshima and Nagasaki. Even survivors run long-term risks of lethal cancers, blood diseases and decades of birth defects.

Current unstable geopolitics, however, make just such a scenario all the more plausible. Conference panelists noted that two nuclear attacks have already taken place – setting precedence for more. Yet such international conferences may prove to be more important as time-honored methods between old Cold War foes begin to break down.

The research on the conference’s opening day – at which Norwegian Foreign Minister Espen Barth Eide spoke– constituted some of the most up-to-date information and modeling on the effects of a nuclear attack. Many of the panelists focused on the effects that one nuclear bomb would have on one city – but all agreed that a worldwide nuclear exchange would result in nearly total devastation of the human race.

The atomic bomb was called by one prominent Japanese physician, Dr. Masao Tomonaga of the Japanese Red Cross Nagasaki Atomic Bomb Survivors Hospital, nothing less that a “gene targeting weapon.” 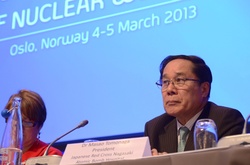 Dr. Terumi Tanaka, who as a child survived the Nagasaki bombing by US forces to end World War II and represented the Japanese delegation, said in his impassioned appeal from the plenum that, “such a weapon must never be used again.”

Sir Andy Haines of the London School of Hygiene and Tropical Medicine said, however, there was less of a guarantee in today’s push and pull world of extremism that a nuclear attack could be averted than “during the relative predictable circumstances of the Cold War.: 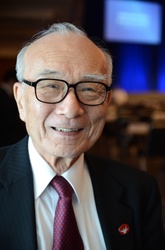 Panelists and delegates from over 130 countries gathered for the conference Monday – entitled “Humanitarian Impact of Nuclear Weapons” – notably did not include ministerial or diplomatic level officials from the US, Russia, France or UK who have well developed nuclear weapons programs.

“States that have nuclear weapons arsenals are evidently keeping a low profile at this conference,” said Bellona General Director and nuclear physicist Nils Bøhmer. “We can learn much from the health effects, but the environment is also at risk from the current nuclear weapons industries, particularly in the US, the UK and Russia.”

Indeed recent radioactive leaks revealed at the US’s Hanford Nuclear Reservation, which produced the plutonium for the bomb the US dropped on Nagasaki, has recently reached even newer proportions.

Bøhmer pointed out that Russia’s Mayak facility and the UK’s Sellafield site have caused environmental hazards since thier inception in the race for the bomb.

“More pressure must be brought to bear on the nuclear weapons industry to prevent further ongoing environmental deterioriation,” he said.

Tanaka, Secretary General of the Japan Confederation of A and H Bomb Sufferers Organization, was a child when the Nagasaki bomb was dropped.

“I was upstairs in my house, 3.2 kilometers from the hypocenter.  Suddenly I saw a huge flash.  I ran downstairs, and as soon as I laid on the floor, I became unconscious. When I woke up, I found myself under glass doors blown by the blast,” he told the more than 400 participants in the conference. “Three days later, I entered ground zero to find my relatives.  Some had burned to death where their house used to be.  Others survived but soon died with heavy burns or fever from radiation. Altogether, five of my family were killed.”

He emphasized that: “The number of A-bomb deaths, several hundreds of thousands, is not just a number –it is the deaths of many individual human beings, whose survival and dignity should have been secured.”

No state is safe if a nuclear weapon is used, even to protect a state’s survival,” he continued. “Nuclear deterrence, which allows the existence of nuclear weapons by assuming their possible use, runs totally counter to humanity.”

Missiles still hot in the silos

Despite the well-learned and still unfolding lessons of Hiroshima and Nagasaki, Dr. Patricia Lewis of Chatham House, London, noted that the United States still has, even after the Cold War’s end, an estimate of 980 nuclear missiles still hot in their silos and Russia an estimated 890.

The immediate affects of a nuclear bomb detonation, said Dr.Lewis was not radiation, per se, but but the power released by atoms splitting, which produces an enormous power release and heat flash that destroy everything that would be needed to assist in helping humans, from hospitals to civil service response.

Sir Haines added that only some one third of a nuclear bomb’s radiation is released upon impact – be it a ground detonation or an airborne detonation when the device explodes several hundred meters above its target – the radiation follows in the fallout.

“These weapons clumsy and unwieldy,” she said. “They are not magic, they are not letting the genie out of the bottle – you can’t have careful or surgical targeting.”

Moreover, she said the physics involved are by now well understood,  making their acquisition by rogue states or independently operating organizations fairly easy – especially given the volume of non-proliferation, which puts much nuclear material off the grid.

What happens when a nuclear bomb hits?

Sir Haines drew upon the immediate damage that would be inflicted on Oslo, a city of 600,000 people, were a nuclear bomb dropped on it today.

“Conditions would be reduced to the middle ages,” he said.

At ground zero, or the center of the explosion, people would be “vaporized” by flash burns and “shockwave death” that travels faster than the speed of sound. This, in turn, carries fallout into the atmosphere, destroying local agriculture as a result.

Using Hiroshima as a baseline, such an explosion would kill anywhere from 90,000 to 160,000 people within two to four months – with those within 1.5  to 2 kilometers of detonation being “charred” to death.

All infrastructure would be total destroyed.

From 2 to 8 kilometers from the epicenter, another 50 percent of the population would die upon impact. Further fatal injuries would occur beyond the 8 kilometer line, manifesting in injuries from flying debris, or later to various cancers.

Some 65 kilometers downwind within the fallout cloud, Sir Haines went on, people would be exposed to some 1500 rads of radiation, several hundred times higher than the allowable yearly dose considered as safe. Within a month, ionizing radiation would begin killing this population as well.

And even this does not take into account the infrastructure damage – blood supplies would be destroyed and supply lines erased.

And these are just the effects on one city.

“In the case of all out nuclear war, the devastation would be too devastating to contemplate,” he said. “ We don’t even have models to make projections.”

Dr. Tomonaga has spent a lifetime studying the long-term health affects to survivors of the Nagasaki bombing, and detailed for the conference the DNA-deep level caused by radiation exposure.

Within 500 meters of the detonation, which occurred above ground, “people were burned and blackened beyond recognition” and within 2.5 kilometers first degree heat burns were documented. As far as 100 kilometers away, people developed acute respiratory problems.

With 10 days, he said, acute radiation sickness, beginning with the characteristic symptom of hair loss were observed.

The radiation exposures damages organs throughout the bodies of surviving victims who were exposed to some 2.5 milisieverts of radiation.

The radiation related cancers and blood diseased like leukemia and myelodysplastic syndrome (MDS) continued to grow unabated in the Nagasaki region until they leveled off in 1965.

He also related these illnesses to children who were exposed to radiation in the womb. Studies of survivors he has conducted reveal damages at a chromosomal level.

A vociferous demonstration arranged by Ban All Nukes Generation (BAN), a European-wide anti-nuclear movement, held a welcome of about 30 people, thanking delegates for the conference.

“We want to thank Norway for holding this vital discussion,” said Martin Hinrichs of Germany. “Talks on nuclear cuts at traditional international levels are always one step forward, two steps back,” he said. “This conference allows all parties to be heard on the subject, not just the big nuclear weapons nations.”

The conference will end Tuesday.