The announcement by Russia’s foreign ministry yesterday – mostly by leaks to domestic media – that it will not renew the decades-old bilateral Nunn-Lugar program to dismantle Soviet-era nuclear and chemical weapons has left the American architects of the program scratching their heads.

Published on October 11, 2012 by Charles Digges 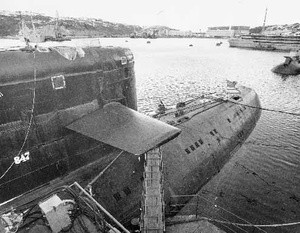 Later announcements by the Foreign Ministry said it did not want the program unless there were major changes made to it, but did not specify what those changes it desired might be.

What is clear is that 24 hours after the initial media reports hit the airwaves is that the Russian Foreign Ministry seems to have no unified opinion about the future of the program – except for making it tougher – while the US side seems to be reading in the tea leaves that the program is not ending so much as being demanded to change.

Nunn-Lugar has, since its inception in 1991, helped Russia rid itself of or safely store its stockpiles of arms race nuclear and chemical weapons. It has provided high-tech security systems for weapons storage sites and helped pay for the dismantling of mothballed nuclear submarines and other weapons – all for a bargain basement price of about $500 million a year.

It has also played a major role in preventing the deadly weapons from falling into the wrong hands amid an economic meltdown and political turmoil that followed the collapse of the Soviet Union.

What the papers – and the officials – are saying

Russian newspapers, mainly Kommersant, quoted unnamed Foreign Ministry officials Wednesday as saying the Russian government would not renew the hugely successful Nunn-Lugar program when it expires next spring, largely because the Kremlin says it has the money to take care of its own weapons legacy – and because it was afraid the bilateral program gives the US too much access to and information about the nation’s military technologies and weapons sites.

Officials from the Russian and Foreign Ministry and Defense Ministries Wednesday would not comment independently on the veracity of the anonymous claims.

The announcements in the Russian press by Thursday morning were being taken as an article of faith in most large US media outlets, with the Washington Post, The New York Times, The Wall Street Journal, CNN and other mainstream outlets placing a tombstone on the Nunn-Lugar program.

The New York Times, in particular, portrayed statements from Lugar’s offices that were meant to rebut reports that the program was ending in Russia as concession statements that it was.

Yesterday’s announcements from the Russian press elicited outcry from US government officials and NGOs – including Bellona – who all called the move a shocking and dangerous precedent toward closing off international access to a nuclear weapons problem that affects the entire world.

“In my view, the end of the [Nunn Lugar] program […] would be a serious mistake for both sides and for the global community,” Kenneth Luongo, President of the Washington-based Partnership for Global Security, one of the America’s most authoritative nonproliferation think tanks, told Bellona.

“There is little that binds the US and Russia together at this time and mutual cooperation to ensure that [weapons of mass destruction] are secured and not vulnerable to theft or proliferation is one of the strongest common links between the two countries,” he said.

Does the Russia want to overhaul or end the program?

Whether Russia wants to kill the program outright or adapt it in a way it finds more suitable still remains in question, and the Russian Foreign Ministry seems to be offering no guideposts.

“American partners know that their proposal doesn’t correspond to our ideas about what forms and what foundation we need to develop further co-operation,” the statement read. “For that, we need, in particular, a different and more modern legal framework.”

The Ministry did not elaborate on the motives behind the decision or spell out its demands.

Deputy Foreign Minister Sergey Ruabkov added to the confusion by telling Interfax in far more categorical terms that, “The American side knows that we would not want a new extension. This is not news to the American side.”

US side caught unawares by the Russia reports

The announcements of Nunn-Lugar’s demise were news to US Senator Richard Lugar, who with former Senator Sam Nunn, coauthored the Nunn-Lugar legislation, also known as the Cooperative Threat Reduction program, or CTR.

“I have seen recent press reports regarding Russian views on the continuation of Nunn-Lugar,” said Lugar in a statement to Bellona, who last August held talks in Russia on Nunn-Lugar’s future with the Russian Foreign and Defense Ministries.

He said the Russian government “indicated a desire to make changes to the Nunn-Lugar Umbrella Agreement, as opposed to simply extending it,” and wrote that: “At no time did officials indicate that, at this stage of negotiation, they were intent on ending it, only amending it.”

But Ruabkov’s blunt assertion against an extension seems to contradict this. So which interpretation of events is correct?

The Partnership for Global Security’s Luongo pounced on what Russia’s notion of amending the program would mean. He said it was clear that Russia wants amendments to the “CTR agreement as opposed to extending it in its current form.”

“But, the question is what they want to amend and is ‘amendment’ a euphemism for slow asphyxiation?” he said.

Lugar’s office grappling with the reports

In an email interview with Bellona, Lugar spokesman Andy Fisher late Wednesday elaborated on the Russian Foreign Ministry statement, writing that the “official statement indicated that they were not supporting continuing the current agreement, but that the program should continue.”

‘The derivative Russian media reports seem to ignore this nuisance, and the fact that negotiations have gone like this before,” said Fisher.

US nonproliferation experts have noted that negotiations for Nunn-Lugar extensions have never been easy, and that 2006 talks to renew the program through 2013 were especially problematic.

If the Foreign Ministry does not wish to crush Nunn-Lugar altogether, Luongo suggested that one sticking point that the Russia’s may have with the current Nunn-Lugar Umbrella Agreement could be liability provision that makes Russia responsible for all accidents occurring in Nunn-Lugar funded projects, even if non-Russian personnel are not responsible.

Getting this provision through in the Umbrella Agreement that was signed by Putin was a horse pill for the Russian side.

While Luongo said that addressing liability issues are an “easy fix,” other Umbrella Agreement requirements, like requirements by the US Department of Defense (DoD) – which runs Nunn-Lugar – that all funds spent by Russia be subject to inspection could be a harder sell.

“That is a much tougher issue to fix since the origin of that requirement is within the DoD regulations, and they would have to be amended or reinterpreted,” said Luongo.

Other spats, Luongo noted, could be that Russia wishes to levy import fees on goods provided under CTR. But Luongo said that would be a “political non-starter in the US.”

“And, how would new provisions in the agreement reflect the ‘equality’ and ‘mutual respect’ that Russian officials say they are seeking in an amended agreement?” asked Luongo rhetorically.

Ratcheting up expulsions of foreign money and influence

The Russian Foreign Ministry’s claimed yesterday that the conclusion of – or sweeping amendments to Nunn Lugar, depending on which version is correct – is not tied to the Kremlin-backed expulsion of the US Agency for International Development (USAID), a move that imperils the future of scores of Russian nonprofits.

But Luongo said:  “certainly, there seems to be something of a trend of terminating programs with foreign partners” and noted as another example of this trend the impending end of the Megatons to Megawatts program in 2014.

Signed in 1994, the program allowed the US to purchase highly enriched Russian weapons-grade uranium that had been downblended for use in US commercial reactors. When the program ends, Russia will be able to sell uranium fuel in the US on the open market, and there could be far less transparency on Russia’s highly enriched uranium stocks.

Nunn-Lugar’s future no long in US hands

If anything is clear in the dust kicked up by the Russian Foreign Ministry’s on and off the record statements, it is that the fate of Nunn-Lugar in Russia is no longer in US hands “except as it relates to trying to accommodate Russian amendments,” said Luongo.

“But, the issue is more than the fleeting joy that some Russian officials may get from sticking the US in the eye to make a point about the country’s independence,” he said, adding that the debacle comes at precisely a time when signals “promoting more interaction and transparency in the global effort to prevent nuclear terrorism” must be broadcast.

“If the agreement is terminated, then it sends one of the worst signals possible to the international community about the importance of cooperation to secure loose nukes and other WMDs,” Luongo, said.

“The choice is one for the Russians, but the implications of that choice are global,” he said.