Far from the political fray, as the United States celebrated the end of the Cold War and the fracturing of the Soviet Union into several states each with their own nuclear weapons, Senator Richard Lugar – who was voted out of his 35-year old senate seat Tuesday – saw through the confetti and party hats and identified a brewing catastrophe. 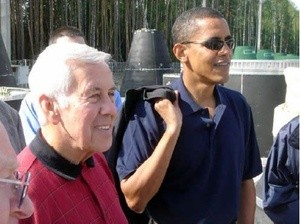 That catastrophe was some 15 newer and smaller states each with their own nuclear arsenals whose political futures were far from clear, and whose newly inherited atomic capabilities made them a threat not only to the US, but to the world at large.

And Lugar had the vision to see that, over a very short period of time, 15 new governments ranging from reform oriented and western-minded, to a veritable lunatic fringe of Soviet nostalgists and cloistered dictators would soon form.

Something had to be done quick, and dancing on communism’s grave was not it.

Eschewing the self congratulatory note trumped by the administration of George H W Bush for its “victory in the Cold War,” Lugar set to work on developing legislation with Georgia Democratic Senator Sam Nunn to help the former Soviet states secure and destroy their nuclear weapons.

Facing an indifferent administration and opposition from many in Congress, he and Nunn were nevertheless able to cobble together a modest program in 1991 that was acceptable to Bush Senior and legislators.

Having secured Soviet states’ nuclear weaponry in Russia for more centralized oversight, the program has expanded in recent years, helping other countries safeguard and dismantle their stockpiles of nuclear, chemical and biological weapons.

And all this for an average price tag of some $450 million a year in what has been hailed by many Nunn-Lugar supporters as the Pentagon’s cheapest weapon of national defense. 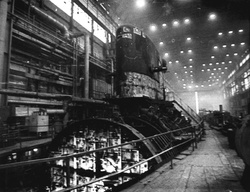 “Richard Lugar’s a national hero,” said Joe Cirincione, president of the Ploughshares Fund, a group dedicated to disarmament. “If he wasn’t there, we would face greater threats today. We’re safer because of what he’s done.”

Lugar’s loss, said Cirincione, “does more to weaken our national security than dozen of terrorists threats in the Middle East.”

Many within the Nunn-Lugar establishment and its proponents are pessimistic that the program will survive the blow of Lugar’ loss in the senatorial race in his home state of Indiana.

Lugar’s defeat by his challenger Richard Mourdock, a candidate supported by the US Tea Party movement of far right-wing Republicans and Libertarians, led Lugar’s senior staff member, Mark Hellke, to toll the death knell on the program.

“I fear we are going down. The end of Nunn-Lugar,” he wrote in an email interview with Bellona earlier this week, the night before the Indiana senatorial election.

On the day of his boss’s defeat, Helmke was even more categorical.

“With Lugar defeated there is no single congressional champion for Nunn-Lugar to counter knee-jerk anti-Russian political gamesmanship. NATO’s biggest ally in Congress has fallen to the isolationists,” Helmke said.

Bellona’s general director and nuclear physicist Nils Bøhmer voiced hope that such a scenario would not bear out.

“The potential end of Nunn-Lugar is a serious setback for the important work to secure nuclear materiel in Russia,” he said.

”Even though the Nunn-Lugar program has done some outstanding work to secure this material, there is still a lot of nuclear material that needs to be better secured. I hope US Congress will understand that someone needs to continue this important work.” 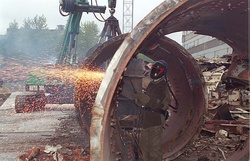 Russian submarines being dismantled. Credit: US Department of Defense

Lugar cedes his seat in a 60 percent to 40 percent loss to Mourdock, Indiana’s state treasurer, known for his open scorn for bargaining, and who whose stance on the geopolitics of nuclear arms remediation is unknown.

Lugar is characterized by his colleagues as being a steady, soft spoken and persistent voice of bipartisan compromise.

But Lugar’s nearly unparalleled accomplishments in the fields of US foreign policy and International relations offer hope that Nunn-Lugar will transcend his presence in the Senate.

“Domestically [Lugar’s defeat] certainly knocks out one of the main pillars out of the non-proliferation establishment,” he said in a telephone interview with Bellona from Philadelphia Thursday. “But Nunn-Lugar has been institutionalized sufficiently that it is not likely to disappear.”

But on the international stage, America’s backlash of increasingly isolationist and populist politics are likely to be misunderstood, said Luongo, especially given the Lugar’s reputation for providing a salve for partisan divides and persistantly preaching policies of cooperation.

“On an international level, it sends the wrong signals when a steady, bipartisan Senator who sought cooperation and who was internationally important gets defeated by a right wing ideologue,” he said.

And although the Obama Administration is proposing deep across the-board-cuts in the US nonproliferation efforts in 2013, the budget line for Nunn-Lugar has remained largely untouched, Luongo noted.

Who can match Lugar’s stature?

But who will pick up the Nunn-Lugar flag is unclear for the moment, though Luongo pointed out many in the House of Representatives and the Senate who probably would not let it lie for long.

California Democratic Senator Diane Feinstein has been a staunch supporter of Nunn-Lugar since her tenure in the Senate began in 1992, a year after the legislation took effect.

The Congressional nuclear security caucus, founded in 2008 by Representative Adam Schiff, a Democrat of California, and Representative Jeff Fortenberry, a Nebraska Republican, is also growing in popularity and numbers and could be a breeding ground for someone who could accept the Nunn Lugar mantle. It is also testament to the bipartisan allegiances that Lugar sought to secure the loose nuclear stockpiles of post-Soviet Russia.

But Luongo acknowledged that current beltway politics are unlikely to fill the large shoes that Lugar leaves behind.

“When the person the program is named after is no longer on Capitol Hill, it does make it more difficult to maintain the political profile,” he said.

Lugar entered the Senate in January of 1977 as an ambitious politician and has achieved the status of a statesman, working with nearly six presidential administrations and lawmakers from both parties to solve complex problems.

Nunn-Lugar, however, will stand as Lugar’s crowning accomplishment, and US headlines about his defeat read more like obituaries and elegies to the Senator than they did as a simple reporting of a routine political defeat.

While Nunn played a central role in developing the program, he retired from the Senate in January of 1997. Since then, Lugar has been the program’s chief advocate on Capitol Hill. 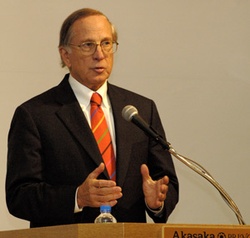 “Dick Lugar never compromised his principles in anything we did together, nor did I,” continued Nunn. “We found ways to work together because we examined the facts and let the facts have a bearing on the conclusions, and I’m afraid in today’s political world too often people start with the conclusions and then hunt facts to justify them.”

Many established analysts describe the Nunn-Lugar program as a major achievement, worthy of being referred to in the same breath as the Marshall Plan, the large-scale American program to aid Europe where the United States gave financial support to help rebuild European economies after the end of World War II in order to prevent the spread of Soviet communism, said the Atlantic Monthly in its write up of Lugar’s defeat.

From Capitol Hill to the White House, Lugar will be missed

In August 2005, Lugar and the then-new senator from Illinois, Barack Obama, traveled to Russia, Ukraine and Azerbaijan to check on the progress of nuclear disarmament. That earned Lugar the title of Obama’s favorite Republican, a moniker used against him in the Indiana Senatorial campaign.

In a statement Tuesday, Obama praised Lugar as a man who “comes from a tradition of strong, bipartisan leadership on national security that helped us prevail in the Cold War and sustain American leadership ever since.”

“I’m just devastated,” Senator Susan Collins, a Maine Republican, told the Associated Press Wednesday. “He is such a fine person and has made so many contributions to this country’s security and to the security of the entire world through the work he’s done on nuclear non-proliferation. I just can’t imagine the US Senate without Dick Lugar, so I’ll miss him terribly.”

Democratic Senator Dick Durbin of Illinois said of Lugar’s defeat: “It’s a sad day on both sides of the aisle.”