Belarus has announced its intention to renege on an agreement with the United States to get rid of its highly enriched uranium stockpile for down-blending after Washington imposed new economic sanctions on the former Soviet republic. 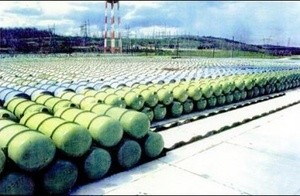 The pact last December was an advance in the Obama administration’s campaign to secure all vulnerable stocks of nuclear material by 2014, apart of the Global Threat Reduction Initiative, which is geared toward repatriating poorly guarded highly enriched uranium stocks given out over decades by the Soviets to satellite states.

While the suspension announced Friday was a sign of deepening tension between Belarus’s flamboyant authoritarian leader Alexander Lukashenko and the West, analysts said it didn’t pose a serious security risk.

Yet the repatriation program itself has recently come under environmental scrutiny as environmentalists and politicians question the wisdom of storing and processing highly enriched uranium in Russia’s substandard, environmentally unclean nuclear facilities.

Under pressure of massive public protests in Germany and Russia, Norbert Röttgen, Germany’s environmental minister in December of 2010 refused to ship 951 spent fuel rods from the Rossendorf research reactor in the former East German region of Saxony to the controversial Urals region Mayak Chemical Combine.

Other countries covered it he Global Threat Reduction Initiative include, China, North Korea, Egypt, Hungary, Kazakhstan, Latvia, Libya, and the countries of the former Yugoslavia.

Lukashenko proud of his uranium

This leaves Belarus as the last country in the former Soviet orbit outside Russia with a large, Cold War-era stockpile of highly enriched uranium, which can be used to make nuclear bombs if enriched to a pure-enough grade – something that has not been lost on Lukashenko.

In April 2010, Lukashenko refused to participate in the Global Threat Reduction initiative and dramatically announced that he had large stocks of weapons-grade uranium. He said at the time that he would not be “dictated” to abandon it and praised it as a “commodity.”

Later that year, during a security conference held in Astana, Kazakhstan, the Obama administration announced it had brokered a deal with Belarus to relinquish the uranium to Russia in exchange for US help building a Belarusian nuclear power plant – despite the clattering of Belarus’s neighbors against the plant.

The US State Department, however, built several clauses into its deal with Belarus, including improving human rights and holding free and fair elections as conditions for its assistance – all precepts that were tattered in Lukashenko’s latest reelection.

The US and European Union imposed travel restrictions and other sanctions against Lukashenko and other Belarusian officials this year after Lukashenko won his new term in the disputed election and jailed many of his rivals.

The new US sanctions, imposed last week in response a clampdown on dissent, bar transactions with four state-controlled firms with close ties to Lukashenko.

Belarus, in the grip of a severe economic crisis that has devalued its national currency by half, still said in June that it plans to move forward with the nuclear power plant project – even as Russia, its most ardent partner in trying to get the plant built – has issued since this summer, withering criticism of Belarus’s president that cast doubt on the project.

Russia has intended to finance the Belarusian nuclear power plant in terms of credits to be paid back when the plant is operational. But Russian finance minister Alexei Kudrin has said those credit would be put on a tighter leash so long as members of Russia’s press continue to be harassed in Belarus.

The US State Department meanwhile has never answered several faxed and phoned requests from Bellona to provide information on what kind of help America intended – if any – to offer Belarus in its pursuit of a nuclear power plant.

Under the uranium repatriation agreement, US officials said after the April meeting in Astana that Belarus was to ship 220 kilograms of uranium to Russia by 2012. Russia would down-blend the uranium to a less-purified grade at the Mayak facility and return it.

About 10 percent of the stockpile has been shipped to Russia, Viacheslav Kuvshinov, head of Belarus’s state-run Joint Institute for Power and Nuclear Research, told the Wall Street Journal.

The Belarusian Foreign Ministry said in a statement that the shipments were halted because of US economic sanctions that go against “the spirit of interaction and cooperation.” It said they would resume “once sanctions are dropped.”

Meanwhile, the uranium will remain securely stored, in line with Belarus’s international commitments on nonproliferation, the foreign ministry statement said.

Tommy Vietor, spokesman for the U.S. National Security Council, said that the US has “always viewed such nuclear-security issues as nonpolitical given their importance to international security” and that the Obama administration was “hopeful that we can find a way forward in the weeks and months ahead.”

Russian officials didn’t respond to requests to comment on the suspension.

Alexander Klashkovsky, an independent Belarussian political scientist in Minsk, said the country’s leaders “are playing a political game,” not signaling a security challenge to the West. “They understand that uranium is not a good topic for jokes.”

He said Belarus could face pressure from Russia, an ally and trading partner, to resume the uranium shipments.