Published on December 20, 2010 by Charles Digges 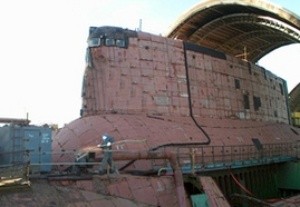 The vessel was built by Fincantieri at the Mudzhano shipyard following the framework of a 2003 agreement on bilateral cooperation in dismantling Russia’s submarine fleet. The construction itself was agreed in July 2002 after the G8 summit in Kananaskis, Canada, where leaders agreed the Global Partnership against the Spread of Weapons and Materials of Mass Destruction.

Under the Global Partnership, G-8 nations were to provide $20 million between 2002 and 2012 – $10 billion coming from the United States and another $10 from other of the group’s members.

In 2005, apparent shortfalls in money pledged and spent by member nations were discussed by the G-8 in Tokyo. Italy was among those that renewed its commitments to the Global Partnership, plugging €360 million ($560 million) into the agreement on top of other funding it had agreed to in 2003.

The contract for the Rossita – which will go into service in 2011 – was signed between deputy director of Russia’s state nuclear corporation Rosatom Yevgeny Yevstatov, and Giovanni Battista Narbone, head of the industrial policy management department of Italy’s Ministry of Economic Development in April of 2008.

The completed vessel was officially launched on 16 December. It measures 84 metres in length by 14 metres in width and has two temperature-regulated cargo holds. It can carry up to 720 tonnes over distances of up to 3000 kilometres.

Atomflot, the shipyard responsible for Russia’s nuclear icebreakers, will take delivery of the ship a few months into 2011 and will put it to work shuttling between Gremikha, Andreeva Bay, Sayda Bay, Severodvinsk and other areas where submarine dismantling work is taking place. The ship’s hull is heavily fortified to deal with ice along the Northern Sea Route.

The waste collected by the Rossita will be delivered to northern ports that can facilitate rail deliver of the waste to storage and reprocessing at the Mayak Chemical Combine.

The vessel is part of a two pronged agreement signed by Russia and Italy that will also involve he construction of radioactive waste treatment and storage facilities at Andreyeva Bay. Two submarines have already been dismantled under a joint Italian-Russian project.

The Italian and Russian governments signed a cooperation agreement in November 2003 for the dismantling of Russian nuclear submarines and for the safe disposal of radioactive waste and used fuel.