Bellona unveils its ‘Norilsk Nikel: Impact on the Environment and Public Health’ report

MURMANSK – “Bellona has never demanded and does not plan to demand the closure of the Norlisk Nikel mining and metallurgical company – we insist on modernization of the enterprise, which at present is going too slowly” said Larisa Bronder, co-author of a new Bellona report on the world’s leading producer of nickel and palladium.

Published on December 14, 2010 by Anna Kireeva, translated by Charles Digges 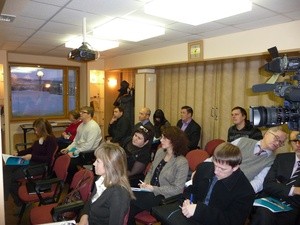 The report, available in Russian, is a reneawal of several years work by Bellona on the prevention of the negative environmental and health impacts of Norilsk Nikel.

Starting in the late 1980s, Bellona actively sought a solution to the problems linked to trans-border pollution and the degradation of the arctic ecosystem caused by the Norilsk Nikel’s activities, as well as attracting public and official attention to the issue.

The hopes of the Norwegian side for a successful solution to the ecological problems of the Russian-Norwegian border area that appearing at the begging of the 2000s were linked to the singing of an international agreement on financing Norilsk Nikel’s modernization at its Kola Peninsula division, where much polluting smelting occurs. The company, however, unilaterally tore up the agreement.

“Of course we are not satisfied that the previous agreement was not fulfilled,” said Norway’s consul general in Murmansk, Jon Elvedal Fredriksen. But Fredriksen encouraged looking to the future. Currently a group of Russian and Norwegian experts have been convened for cooperation in the sphere of near-border air quality monitoring.

This is a good indicator, I hope – it will lead to a positive result,” said Fredriksen to the agreement of Norilsk Nikel representatives.

Bellona’s reports characterized today’s ecological problems in the areas where Norilsk Nikel operates as being as unfavourable as they were at the end of the 1990s.

The company has no environmental transparency. The results of international and internal audits are not available to the public, nor is the system of accountability to environmental preservation activities undertaken by the company, by which near-border monitoring is is effected to check if ecological promises are being fulfilled.

Bellona’s report evaluated the environmental programme of the Kola division of Norilsk Nikel to be extremely ineffective. The critique is fundamentally targeted  at the creation of a positive image of the company, and not at the solution of the existing environmental problems. “It would be good to see not muddy formulations, but a real program of ecological modernization,” said Bellona’s Bronder.

“Its intriguing that the Kola division of Norilsk Nikel agrees only with the figures that Norilsk Nikel produces,” said Bronder. “We uses official figures supplied by Russia’ Federal Service for Supervision of Natural Resource Usage (Rosprirodnadzor), the Norwgian Institute for Air Research (NILU) and the Committee for Natural Resource Usage for the Murmansk Region. We have no reason not to believe official figures.”

According to official statistics, the Murmansk Region ranks fourth in the number of work related illnesses in Russia. According to the Ministry of Health and Social Development of the Murmansk Region, first place among those illnesses are employees of the Kola division of Norilsk Nikel.  “The life expectancy of workers at Norlisk Nikel is 10 years lower than the overall life expectancy in Russia,” said Bronder.

Concerns about the growth of work related illnesses were also shared by Viktoria Dubeykovskaya, chief specialist with Murmansk’s Health Committee. “This growth of professional pathologies that we are presently diagnosing cannot but be cause for alarm. We are speaking primarily about lung illnesses, supporting motor apparatus [such as the skeleton and muscles] and hearing loss among Norlisk Nikel workers and among the population where the enterprise is located,” Dubeykovskaya told Bellona Web.

In her concluding remarks, Kovtun of the Kola Divison of Norilsk Nikel said: “We must thank Bellona for this titanic work, which the organization conducted in preparing this study.” She underscored that the company would apply all efforts to lower its negative impact on the environment and public health.

The Bellona report was designed to draw attention to the problem. Of course, there are various date and approaches to evaluating ecological damage. Bellona is prepared to cooperate with all interested parties for the solution of this extremely important issue both for the public of the Murmansk Region and the entire near-border area.