NEW YORK – Ukraine has agreed to eliminated its entire stockpile of weapons grade nuclear material – specifically highly enriched uranium that would be enough for several bombs – in a pledge the country’s president Viktor Yanukovich made to US President Barack Obama, White House officials said. 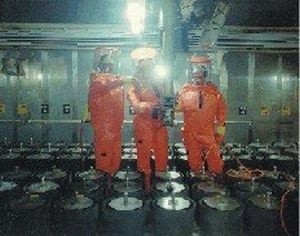 The vow to eliminate the nuclear stockpile in Ukraine, a former Soviet republic, by 2012 came shortly before the beginning of a key nuclear security summit involving 46 nation that are being hosted by Obama in Washington. Forty-seven heads of state – including Obama and Russia’s President Dmitry Medvedev – and ministers are attending the summit, which kicked off Monday.

“Today Ukraine announced a landmark decision to get rid of all of its stockpile of highly enriched uranium by the time of the next nuclear security summit in 2012,” said White House spokesman Robert Gibbs in televised remarks.

“This is something that the United States has tried to make happen for more than 10 years. The material is enough to construct several nuclear weapons,” he said.

It would seem that the summit, in which many are not placing much stock, is at least affording a number of bilateral agreements – both good and bad –  that had been collecting dust to regain some momentum.

The decision by Yanukovich to eliminate his weapons grade uranium stockpile – part of which may be shipped to the United States – is part of the joint Russian-American Global Threat Reduction Initiative to repatriate Russian and US made highly enriched uranium mostly from research reactors.

Gibbs said he had no estimate on what the cost of the Ukraine agreement would be to the US.

The Global Threat Reduction Initiative was signed between Washington and Moscow in May of 2004, and stipulated repatriating highly enriched uranium from 17 countries, the highest priority nations being Ukraine, Uzbekistan, Belarus, Romania, Poland, Vietnam, Libiya and the Czech Republic. Ukraine had remained one of the last nations to relinquish its uranium.

Under a separate agreement, Chile last week surrendered some 18 kilograms of highly enriched uranium it had procured from France and Britain for its research reactors.

Heading off the potential for nuclear terrorism is the top priority in Obama’s nuclear strategy, and a project he took on early in his presidency.

At the urging of several think tanks, Obama sharply reducing expenditures on weapons-building and diverting that funding into nuclear non-proliferation and environmental efforts – an idea also impressed upon him by Senator Richard Lugar, co-author of the Nunn-Lugar act, which made the Cooperative Threat Initiative (CTR) possible.

Under CTR, thousands of warheads and delivery systems in Russia and former Soviet republics have been destroyed in the wake of the Soviet Union’s fall in 1991. Obama served under Lugar on the Senate Foreign Relations Committee and made weapons destruction verification trips to Russia while still Illinois’ junior senator.

Obama and Yanukovych met earlier Monday as the summit was getting under way. Gibbs said Ukraine will convert its civil nuclear research facilities to operate with low-enriched uranium fuel.

Plutonium disposition through MOX off the ropes

In another step toward disarmament, Secretary of State Hillary Clinton and Russian Foreign Minister Sergei Lavrov are scheduled to sign a deal tomorrow in which each side agrees to dispose of 34,000 metric tons of weapons-grade plutonium, enough material for about 17,000 nuclear weapons.

This will represent a reinvigoration of the 2000 Plutonium Disposition Agreement signed between former US President Bill Clinton and former Russian President, now Prime Minister, Vladimir Putin. But it remains unclear whether the reconstituted programme will involve the use of mixed oxide, or MOX fuel, in civilian reactors or not.

Though the prospective plutonium talks are hailed by diplomats, the plutonium disposition efforts headed up by the US Department of Energy have been foundering on the shoals of bad science and bureaucratic chaos since 2003. Disputes between the two governments over protocols to implement the agreement have continued to delay action.

The MOX plan had previously been agreed upon in principle by Clinton and Putin, and would have involved blending small parts of weapons grade plutonium with low enriched uranium for burning in civilian reactors – a plan vehemently opposed by Bellona and other environmental groups as an effort for Russia to revitalise its ailing and contaminating reprocessing industry, as well as pursue plans for a closed plutonium fuel cycle.

But the White House is pleased. Senior Obama advisor Gary Samore told reporters on Friday the deal “is very significant in the sense that over a period of a decade or so it will remove very large quantities of weapons-useable materials, and also it’s an agreement that’s been long stalled,” adding, “It was really President Obama’s focus on this issue and the reset of his relationship with Russia that has finally been able to finalize this agreement.”

Disposal prevents “the plutonium from ever being reused for weapons or any other military purpose,” according to the National Security Council fact sheet.

Each country will dispose of the plutonium by using it as fuel in civilian reactors to produce electricity, the council said. An initial pledge of $400 million in US funds to help Russia dispose of its plutonium has been reduced to $100 million, the NSC said, and the amount will be spread over decades of verified disposal.

It is unclear how Lavrov will square plutonium disposition with his boss Putin, an ardent fan of fast neutron plutonium reactors for power generation.

At the end of last month, Putin announced that the Russian government would be investing $2.2 billion in the development of the Russian nuclear industry’s the construction of a100MWe lead-bismuth-cooled fast reactor called the SVBR by 2015.

Putin told reporters this would be followed by further pursuit of the Russia’s lead-cooled 300MWe BREST fast reactor by 2020 – a sort of holy grail in the Russian nuclear industry that has so far only existed on paper.

While Russia’s Medvedev has thrown his weight behind Obama’s commitment to securing loose nuclear materials over the next four years, Russia’s nuclear industry, noted Bellona’s Alexander Nikitin, is one of the world’s primary proliferators.

“It’s odd that the international community doesn’t see the double standard,” said Nikitin, a nuclear expert and the director of Bellona’s St. Petersburg offices. “While speaking notes of nuclear non-proliferation, Russia has actively offered its own nuclear technology and materials to different countries.”

“One gets the impression that for Russia ‘non-proliferation’ is not a priority,” said Nikitin. “What is most important for Rosatom is business and making money by selling nuclear technology and radioactive material,” he said, adding that, “Russia is  formally covered by the International Atomic Energy Agency and other international regulations that loudly explaining to everyone that they are formally not doing anything wrong, when in fact the world is getting nuclear headaches in North Korea and Iran.”

Though talks on Iran are unlikely to be a focal point of the gathering, said White House officials, and will instead be discussed in sideline meetings, Bellona Russian nuclear industry expert Igor Kudrik said the Washington summit will allow Russia to puff itself up diplomatically.

“The US is giving incentives to Moscow to be more cooperation friendly to make sure that Iran does not get nuclear fuel for their Bushehr reactor this summer,” said Kudrik.

“One of the biggest incentives (to be offered by the summit) is that Moscow feels important. But Moscow has to demonstrate its leadership by acting responsibly and to not block initiatives to actually preventing the proliferation of nuclear materials, which has not been the case with Iran,” said Kudrik.