The Bush Administration plans to put a high profile civilan nuclear agreement with Russia on hold over Moscow’s conflict, officials said, and the Kremlin itself has urged that the lucrative deal be shelved until tempers cool.

On its surface, the pact between the world’s two biggest nuclear powers is aimed at opening up the booming US nuclear market and Russia’s vast uranium fields to firms from both countries by removing Cold War-era restrictions. But it also includes many environmentally devastating proposals that would impact the population of Russia, which have been given scant attention.

Ironically, the Russian incursion into Georgia has something of an environmental silver lining.

US officials expect Condoleezza Rice, US secretary of state, to recommend that Bush recall the civil nuclear cooperation agreement from Congress in the wake the Georgian conflict.

"At this point, it’s dead," a congressional staffer said.

The cooperation agreement  – called the 123 Agreement as it falls under section 123 of the US Atomic Energy Act – will therefore prove to be one of the most visible victims in the souring of relations between Washington and Moscow since hostilities broke out over the break away Georgian regions of Abkhazia and South Ossetia on April 6th. The Russia government this week recognized the two republics as sovereign nations.

Both sides have said the passage of the 123 agreement is crucial to the Global Nuclear Energy Partnership, which the United States and Russia have discussed for more than a year as a way to expand peaceful nuclear energy development and mitigate proliferation risks. 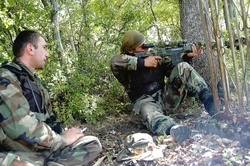 The move to ice the nuclear pact darkens prospects for bilateral cooperation between the two countries particularly in the area of civilian nuclear safety and fuel production.

Russian nuclear officials were grumbling Wednesday about the stalling of the pact. The deal was signed in May but needs approval from US Congress. A Russian official told Bellona Web it would be better for the deal to be delayed until next year to prevent it being blocked.

"It is a shame that the U.S. administration could not push this agreement through Congress in the time there was," the Russian official said.

"If you take into account the recent political events, Congress is unlikely to pass it, so to avoid it being blocked it would be right and proper to recall it and let it be looked at by the new administration."

Many in Washington had hoped the pact would help the United States gain some leverage through Moscow over Iran’s nuclear programme, which Russia have helped promote by building the Bushehr reactor, putting the Kremlin in a unique position to ease tensions.

Even US presidential candidates Barack Obama and John McCain has built some elements of the cooperation pact into their own prospective programmes for collaborating on arms control and nonproliferation initiatives.

One of the pact’s major provisions that will be torpedoed – at least until tensions cools, say officials – is the construction of an international uranium fuel bank in Angarsk, Russia with the help of US congressional and private funding. US Congress has pledged $50 million dollars toward its completion as a matching grant from the Nuclear Threat Initiative, a Washington-based nonproliferation NGO, which was provided its financing by US tycoon Warren Buffet.

Norway, too, has posted $5 million toward the project.

The purpose of the fuel bank, which has received broad international political support, is to provide countries that wish to pursue nuclear energy, but who have no native uranium enrichment capabilities, with fuel. The less obvious purpose is for the United States to have a hand in winnowing the centre’s client list to cut off possibly hostile nations from cultivating nuclear programmes.

But US efforts to cut a check for the project were on hold as of Wednesday, according to the congressional staffer, who asked to speak confidentially as he is not authorized to speak to the media on the subject.

“There is a lot of money that is currently going nowhere,” he said.

Another of the pact’s provisions that will be shelved or sunk is Washington’s promise to allow shipments of US controlled spent nuclear fuel – which constitutes some 80 percent of the world’s spent fuel – to Russia for storage and reprocessing, something Moscow has coveted for more than a decade.

With more than 15,000 tons of spent nuclear fuel already languishing in interim storage and space growing short, however, it is impossible to say where this radioactive bonanza would be stored.