Two of Russia’s three remaining Russian weapons-grade plutonium production reactors are ahead of schedule for shutting down and will stop operating before the December deadline, the US Department of Energy (DOE) said early this week.

Published on February 5, 2008 by Charles Digges

The plutonium production reactors in Seversk, Siberia, which made weapons grade material during the Cold War, are now operating at half power, but are still producing about 1,000 kilograms of weapons usable plutonium between the two of them annually.

Russia’s other remaining plutonium producing reactor, located at Zheleznogorsk near Krasnoyarsk, is slated to shut down by 2010. The Zheleznogorsk reactor produces an additional 500 kilograms of plutonium a year.

The weapons plutonium is stored on site at the reactors in oxide form and security questions have been raised about the decrepit state of fences and other safeguards for the material.

The Seversk reactors were supposed to be shut by the end of 2008, but Kiriyenko told Bodman that shutting down the facilities earlier was “realistic,” senior DOE officials said.

"Joint efforts to safeguard materials and safely shut down legacy sites are a key area of U.S.-Russian cooperation and are essential to keep nuclear weapons safe and secure," Bodman said.

Kiriyenko promises security upgrades for Pu
Bodman was given assurances by Kiriyenko that a programme to upgrade security at many of Russia’s nuclear sites would be completed on schedule by the end of the year and that steps would be taken to ensure the security improvements will be maintained into the future, said a DOE official who was privy to the talks.

While Russia has agreed to dispose of 34 metric tons of excess weapons-grade plutonium via the recently revived Plutonium Disposition agreement of the 2000, Russia’s three remaining reactors have continued to churn out enough plutonium to build one new nuclear bomb each day.

Russia is estimated to have some 150 tons of surplus weapons plutonium to the United States’ 100 ton surplus.

Reactor shut down causes heat and power problems
Russia has in the past argued that the reactors should remain open, as they are the chief source of power heat in their respective regions. Initial efforts by the US Defence Department’s Cooperative Threat Reduction programme, begun in 1994, to convert the cores to prevent them from producing weapons grade plutonium of the reactors ran aground on the shoals of poor engineering and red tape.

The task of shutting them down and refurbishing nearby fossil fuel plants to make up for the projected power and heat deficit was given to the US DOE in 1998. To bring the fossil fuel plants online, the United States has committed $926 million. The one at Seversk is almost complete, but it is unclear when Zheleznogorsk’s plant will be operational.

Kiriyenko told Bodman that the two Seversk reactors already have been operating at half power, cutting in half the amount of plutonium being produced, said the DOE official.

The ‘most unsafe reactors in the world’
Shutting the reactors has been a major US nonproliferation goal. It’s been an "up and down" struggle over the years to get the Russians to scrap the reactors, Matthew Bunn, a nuclear nonproliferation expert at Harvard’s Project on Managing the Atom who closely monitors Russia’s post-Cold War handling of nuclear weapons material, told the Associated Press.

Wider issues of Russia’s poor nuclear security
On a broader issue, Bodman and Kiriyenko discussed progress in completing security upgrades — improved fencing, alarm systems and guard houses — for weapons material at hundreds of buildings and bunkers at sites across Russia.

Kiriyenko "gave Bodman his promise that he would do what’s necessary" to complete the upgrades by the target date of the end of this year, said the DOE official.

Bodman told Kiriyenko that the United States views these safeguards as a key area of US-Russian cooperation and "essential to keep nuclear weapons out of the hands of terrorists."

US non-proliferation academics ignorant of the state of security at Russian nuclear sites
So far upgrades are said by US officials to be completed at 85 percent of the sites covered by US-Russian security improvement programmes with the work at the remaining sites expected to be finished by year’s end, according to the DOE’s National Nuclear Security Administration, which oversees the programme.

Bunn, who has been critical of the pace of the Russian security improvements, said it "remains a struggle to get it all done" but that there appears to be "worthwhile progress."

Fifteen years ago, Bunn noted to AP, some of the nuclear sites had gaping holes in fences, lacked detectors to set off alarms if plutonium or highly enriched uranium was carried out the door, and padlocks that could be easily snapped.

Contrary to Bunn’s assertion however, investigations by Bellona and other Russian environmental and non-proliferation groups have repeatedly revealed over the past five years that the upgrades Bunn asserts have taken place have, in fact, not been effected. 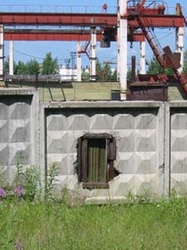 One glaring example exposed by Bellona in 2001, was a gaping hole in the perimeter fence – complete with a well worn foot path –around the Zheleznogorsk reactor. Russian nuclear officials promised at the time to remedy the security breach. But investigations by other environmental groups within the past five years indicate the Zheleznogorsk facility has done absolutely nothing to repair the 4 metre hole in the fence.

In the same year, Bellona also documented that fencing, alarm and other security equipment sent to Russia by the United States was not being delivered to poorly secured sites because the shipments were routinely being detained by Russian customs. On one occasion, nuclear safeguard materials were held up because Russian customs officials asserted the shipment contained a quantity of cocaine.

DOE site inspectors interviewed by Bellona also revealed that the alarm systems that Bunn touted as being workable at most facilities in Russia that have received US upgrades are likewise non-functional. On more than a dozen incidents since 2003 alone, DOE inspectors found that alarm systems at upgraded sites, while installed, were actually shut off in order to conserve money on electricity.