US to convert more weapons plutonium than originally planned 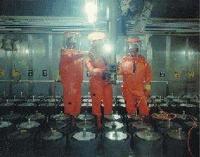 Thomas D’Agostio, head of the DOE’s nuclear weapons programme said Thursday the department has concluded that additional tons of plutonium can be taken from dismantled warheads and disposed of, beyond the DOE’s agreement with Russia that both countries would convert 34 tons of surplus weapons-grade plutonium into commercial mixed oxide (MOX) fuel.

Indeed, it is unclear whether Russia will be able to meet the 34 tons agreed to – if Moscow even has the desire to continue with the MOX disposition agreement. The non-proliferation agreement has foundered in recent years as Russia claims it does not have the funds to match US donations to begin construction of a MOX fabrication plant.

D’Agostio did not put a specific number on the extra tons to be converted of by the United States, but said "It will be significant.”

The exact amount has not been decided because the matter was still under discussion with the Pentagon, he said.

The administration for the past seven years has had plans to convert 34 tons of weapons-grade plutonium into a mixed oxide fuel as part of the 2000 Plutonium Disposition Agreement, signed between former US President Bill Clinton and current Russian President Vladimir Putin.

The US plutonium is to be converted into a mixed oxide fuel that would then be burned in a commercial nuclear power reactor. The DOE plans to begin construction this year of a conversion facility at the Savannah River nuclear complex near Aiken, South Carolina.

D’Agostino told reporters last week that the DOE had determined "we can add more plutonium into the mix" destined for disposal. He said decision would be unilateral and no attempt would be made to try to get Russia to match the increase.

"We want to get into a leadership position here globally and look at what minimum we need to do and what more can we do from a leadership standpoint," D’Agostino said.

The administration is preparing a report for Congress on future nuclear weapons needs and weapons stockpile size that indicates more plutonium can be converted.

The Senate Appropriations subcommittee that oversees nuclear weapons funding recently urged the Energy Department "to give greater consideration" to increase the amount of plutonium for conversion into mixed oxide fuel.

The administration hopes that the new weapons stockpile review and the decision to eliminate more plutonium might help sell skeptical lawmakers on the merits of a more robust warhead to replace the aging warheads now in the stockpile.

D’Agostino said he believes such a warhead is needed.

The administration has asked for $88 million for next budget year to examine a design and make a detailed cost estimate. The House recently refused to provide the money; a Senate committee cut it to $66 million.