Russian President Vladimir Putin has submitted a protocol to the State Duma to increase nuclear, chemical and biological weapons security cooperation with the United States by extending the Cooperative Threat Reduction (CTR) programme, which has been dismantling these threats in the former Soviet Union for the last 15 years.

Published on March 2, 2007 by Charles Digges

The protocol, if passed, will also give force to a document known as the CTR Umbrella Agreement, which outlines liability terms setting the fault for any accident occurring during any CTR-run nuclear remediation project – from acts of terrorism to US CTR workers being injured in minor accidents – squarely on Moscow.

Despite this onerous liability factor for Moscow, however, Putin’s protocol is expected by experts in Moscow and Washington to pass through the Kremlin-controlled Duma with flying colors.

But while many observers have noted that the Duma’s traditional submission to Putin’s wishes is hardly an ideal democratic process, they also agree that approving CTR is a good sign in a time of deteriorating East-West relations and the erosion of demilitarisation programmes between Russia and other countries.

“I see (Putin’s backing of extending CTR) as a positive sign when Russia-American relations are as bad as they recently have been,” Paul Walker, director of the Legacy Programme at the Washington-based Global Green USA, said in a telephone interview with Bellona Web. 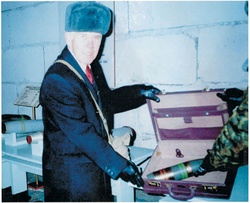 The CTR agreement itself – also known as Nunn-Lugar for the US Senators who drafted it – ran out in 1999, and was extended by a protocol granting it seven more years, meaning the agreement is currently being used on a temporary basis. Because the agreement was signed in 1992, former Russian legislation dictated that it came into force immediately, without ratification by the Duma.

Now that the temporary protocol has expired, the CTR programme must be resubmitted to the Duma for formal ratification. But debate within the hawkish establishments in the Bush and Putin administrations have made CTR a hard sell in both capitals.

The Bush White House just slashed CTR’s traditional funding allocation of about $450m to $350m for the 2008 fiscal year. In Moscow, Walker noted, the winding down of the Putin administration has dissipated interest not in only CTR, but in many other bilateral nuclear, chemical and biological weapons remediation programmes as well.

Past debate about Umbrella Agreement
The accompanying Umbrella Agreement has been in the past a hotly contested issue between Russia and the United States, and many analysts interviewed this week found Putin’s capitulation to its strong terms surprising.

“I can’t blame the Russians for their opposition to the Umbrella Agreement,” said Raphael Della Ratta, project leader for the Washington-based Partnership for Global Security in a telephone interview with Bellona Web.

“The language of the agreement is worded very strongly – as a result, bi-lateral liability agreements (for nuclear, biological and chemical weapons) written subsequently use language that is less strong.”

Pavel Felgenhauer, an independent Moscow-based defense analyst also said the wording of the Umbrella Agreement was distinctly in favor of the United States.

“The liability for Russia is extreme,” said Felgenhauer in a telephone interview with Bellona Web.

Smooth sailing predicted
Though Russia has long grumbled over the liability issues contained in the CTR Umbrella Agreement, analysts nonetheless predict that Putin’s protocol will pass – even with all the ugly liability warts it contains.

“If it is sent to the Duma with Putin’s blessing, I see no reason why it will not be passed,” said Della Ratta.

Felgenhauer was more categorical in his assessment of the Duma and its politics: “The Duma is just a rubber stamp for Putin, and they will pass anything he sends to them.”

The only question, as far as Felgenhauer was concerned, was how quickly the protocol will pass. “It all depends on when the Duma gets the phone call from the Kremlin telling them to pass it,” he said.

Why is Putin getting under the Umbrella?
Felgenhauer said that Russia had little choice but to accept the terms of the CTR Umbrella Agreement if it wanted to collect much needed cash to dismantle submarines, other lingering nuclear installations and – most pressing at the moment – to destroy 5,400 tons of Soviet-produced nerve agent held in a ramshackle barn in the Siberian town of Shchuchye by April 2012, as required by the Chemical Weapons Convention.

“Simply, the situation cannot be left as it is,” said Felgenhauer.

According to Walker, who has special expertise in the Shchuchye programme, Russia and America, led by CTR chief, Rear Admiral John Byrd, have tensely been negotiating for more than six months over turning the project entirely over to Russia to complete.

One of the current contractors at the Shchuchye site is the US engineering giant Bechtel. Money for the programme is managed via the Denver-based Parsons firm. But the Russians want the money to flow directly to their own federal agencies, which, Walker said, would “get a piece of the pie” that they are not receiving under the current payment structure.

Putin’s new-found enthusiasm for renewing CTR and accepting the liability terms that come with it – when viewed in this context – are the Russian government’s effort to obtain that unspent funding to pay Russian contractors to complete the chemical weapons destruction facility, Walker said. Furthermore, the White House mark-up of the CTR budget request zeroed out funding for Shchuchye for the 2008 and 2009 fiscal years.

As a result of this wrangling, money for Shchuchye programme has been stalled, and unspent funding from the years 2005, 2006 and 2007 – amounting to $270m – still remain in CTR coffers.

“The United States is backing out of this programme,” said Walker.

But Putin’s play for the unspent funding may not be enough. In Walker’s estimation, the project could run as much several million more dollars over the current $1.4 billion projection, so the left over $275m could fall well short of covering additional expenses, and Walker said that Russia may have to cover significant financial shortcomings on its own – funding that is not easily found in Moscow.

“I don’t think it was ever submitted for ratification,” said the US source who asked for anonymity because he was not authorised to speak publicly on the issue.