Norway has officially dropped out of the Arctic Military Environmental Cooperation (AMEC) project and will now hold only the title of “observer” to the programme that has aided dozens of nuclear remediation projects in Northwest Russia, chief of AMEC operations in Norway Commodore Jo Gade told Bellona Web in an interview Monday.

Published on October 2, 2006 by Charles Digges 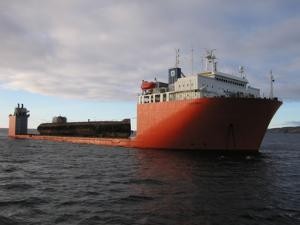 The United States has also dropped out of active participation in – and funding for – AMEC and has similarly relegated itself to an observatory role, Gade said. US officials were unavailable to independently confirm this.

Sharp criticism of the Norwegian and US role in the AMEC project by Great Britain could be the source of the two countries’ withdrawal from the programme as the UK seeks to perform bilateral projects in Russia while trading on the AMEC name, though Gade did not point his fingers directly at London.

According to Gade, the Norway and the United States will declare their operations in AMEC “a success” and their efforts in the programme complete, as new civilian agencies overtake the their responsibilities

But the AMEC programme has long been considered a crucial element in multi-lateral nuclear disarmament because its strong and time-tested military to military relationship with the Russians has fostered trust and allowed AMEC officials environmental clean-up access to points that would have been considered sacred ground for other remediation efforts as recently as two years ago.

What AMEC was
Establised in 1996, AMEC was – until the 2003 joining of the United Kingdom (UK) – a three country consortium created by the respective defense agencies of the United States, Russia and Norway in order to address military-related environmental problems, primarily submarine dismantlement, in the fragile Arctic ecosystem.

AMEC has long been seen as the environmental wing of the US Cooprative Threat Reduction (CTR) programme and was formed to address clean up issues of waste that was being left behind by the United States’ and other nations’ nuclear remediation projects.

AMECs underlying philosophy was that it should be easier to discuss military environmental problems through a military co-operative effort than through civilian channels. The programme also emphasised the need to leave behind an infrastructure for Russia to use after US-led Cooperative Threat Reduction (CTR) and Norwegian programmes have come to an end.

But a proliferation of civilian and commercial structures that the UK, in particular, thinks can fulfill AMEC’s responsibilities have led the UK to press the point of corporate competition for AMEC projects, thus sterring the organisation away from the pure military to military cooperaton it has stood for in the past – something that has caused frustration among Norwegian and US AMEC officials.

The role of the ‘observer’
Gade – who is also assistant director of the Norwegian Ministry of Defense’s Security Policy Department – said that the United States and Norway’s new observational roles would entitle them to attend meetings of AMEC principals. Their decisions and input, however, will have no impact on what projects AMEC will undertake, and they will no longer be able to provide financial sponsorship for any of the projects that AMEC undertakes.

By so doing, the United States and Norway have left AMEC to stand as a bilateral military to military agreement between Russia and the UK.

“AMEC is a military to military organisation,” said Gade, “but nuclear dismantlement projects (in Russia) are increasingly being taken on by civilian organisations like Rosatom. There just isn’t that much to do from a military standpoint anymore.”

Another Norwegian AMEC official said Norway has more Russian military contacts outside the framework of AMEC than in it, thus making Norway’s participation in AMEC redundant.

“We have more points of contact with the Russian military outside of AMEC than we do inside AMEC,” said the source, who spoke on the condition of anonymity because he was not authorised to discuss the future of the AMEC programme.

This official, however, would not comment on what future plans Norway had with its Russian military contacts.

It is as yet unclear how these obervatory bodies will be chosen and to what degree they will be able to take part in the discussions of AMEC’s two remaining stakeholders.

Turbulence after UK joins AMEC
By accounts of US and Norwegian AMEC officials, the UK began slowly to take over the organisation and to maintain a strong grip on its direction after it joined.

Folllowing a November 2005 paper delivered to an AMEC principals’ meeting in Plymouth, England by UK AMEC officials, which negatively assessed Norway and Washington’s role in AMEC, the two countries began to consider backing out of the programme and declaring thier mission within it successfully accomplished.

Both Norway and the United States vociferously denied the British claims. British officials told Bellona Web in May that they were not demanding anything extraordinary in the paper, and presented what they called a series of recommendations. These recommendations later came to be known in AMEC circles as "The UK Paper."

After the UK paper, Norway broadly hinted that its swan song in the AMEC programme would be the transport of the K-60 – a ramshackle, rust-eaten November class submarine that no oe else would touch – from the closed Russian naval base of Gremikha to Polyarny, near Murmansk, for dismantlement.

The United State, for its part, sent a strongly worded letter of protest to UK officials, accusing them of turning their nuclear remediation projects over to RWE Nukem, a commercial organisation whose critics say is lacking in AMEC’s military experience. Norway, according to Gade, registered similar complaints with the UK over their paper.

“In a series of late night meetings, I told the British that their letter was nonsense from beginning to end,” he said. “After all, it was (Norway) who undertook the transport of (the November class) submarine when no one else would touch it.”

Back out and declare success
“We scaled down because of Russia is bending toward dealing with civilian agencies in (nuclear remediation),” said Gade.

“It is best to cease AMEC and declare success.”

UK’s position on US and Norwegian withdrawal
The UK, meanwhile, remained sanguine about the future of AMEC, while Gade said that the UK was only trading on the decade old AMEC “brand name” to further a bilateral programme. This “brand name” said Gade would lend the UK cause credibility when seeking funding, even though – or because – the United States had had the most success under the AMEC programme.

The UK however, is determined to continue the programme on its own terms and invited other qualified countries to join. Sweden and Canada have, according to UK officials, epxressed interest in joining.

“We see the value of AMEC and plan to continue,” said Department of Trade and Industry (DTI) chief Alan Heyes in an interview with Bellona Web. “We will take those countries expressing interest in joining AMEC into consideration,” said Heyes, whose DTI controls the purse strings for UK AMEC.

Alan Mason, who is assistant to Commodore Simon Lister who runs UK AMEC, said “we were aware that the United States and Norway were reviewing their position” in AMEC.

“The UK wishes to continue its role in AMEC because it considers it to be a valuable programmme, but as for Norway and the United States, their role reached a point were they needed to review their position.”

Mason said he did not know if the current plans of Norway and the United States had anything to do with the UK paper that questioned their performance in the AMEC programme.

The anonymous Norwegian official acknowledged, however, that the UK paper played a large role in Norway and the United States’ decision.

“The UK realized it had put out a lousy paper, but was unwilling to recant any of its points,” said the anonymous Norwegian official.