The head of Iran’s nuclear agency ruled out a compromise proposal that uranium enrichment for his country’s controversial nuclear programme be carried out in Russia, saying Saturday that enrichment must be done in Iran, the Associated Press reported Sunday.

Published on November 14, 2005 by Charles Digges 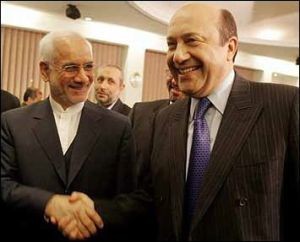 European negotiators with the European Union (EU) and the United States were reportedly willing to accept the arrangement as a compromise to allow Iran to move ahead with its nuclear programme while ensuring it does not produce nuclear weapons. Enrichment can produce material for bombs and for nuclear reactor fuel.


The fuel would presumably be used in the Bushehr reactor on the Persian Gulf, which has been under construction with Russian co-operation for nearly the past decade. The light water reactor has been a thorn in the side of the US security establishment, and a bone of heated contention between Moscow and Washington, which has repeatedly demanded that Russia cease nuclear co-operation with Iran. Moscow has insisted that Irans nuclear programme is for peaceful purposes, and may help the country build some five more reactors once Bushehr is completed.


But even Moscow, who has counted on Iran as a market for its own uranium fuel, has since 2002 been arguing with Iran about who will maintain control of the fuel once it has been burned. Moscow had initially intended to produce Bushehrs fuel and take the spent nuclear fuel (SNF) back to Russia for reprocessing. But Tehran steadily began to cool on that idea to such a degree that Moscow has even offered to pay Iran for Bushehrs eventual (SNF). The reactor is some 80 percent complete.


These hassles now appear to be moot as Iran has announced its intentions to enrich its own uranium, taken from reopened mines in the country and enrich it to fuel levels. 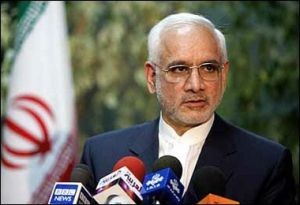 Iranian Vice President Gholamreza Aghazadeh, who heads Iran’s nuclear agency, said after talks with Russias Security Council chief Igor Ivanov that Iran was open to other proposals, pointing to an earlier Iranian offer that other countries participate in the enrichment process on Iranian soil as a guarantee that the programme is used only for peaceful purposes, AP reported.


“What is important for us is that we be entrusted to carry out enrichment in Iran. As for participation by other countries in Iran’s uranium enrichment programme, we will consider it if there are any proposals,” he said.


When asked if Tehran would agree to enrichment being carried out abroad, Aghazadeh said, “Iran’s nuclear fuel will be produced inside Iran.”


Iranian foreign ministry spokesman Hamid Reza Asfi seconded Aghazadeh, saying Sunday that “Enrichment should be carried out on Iranian soil, as other Iranian officials have said before,” he told reporters.

Under the proposal that was floated by Russia to help ease the tension with the EU and United States, Iran would be allowed to carry out an initial step in making nuclear fuel—converting uranium ore into the uranium hexafluoride gas that is the feedstock for making enriched uranium.

EU and the United States.


Iran says it only wants to enrich uranium to low levels for atomic reactor fuel and argues such work is a right enshrined by the nuclear Non-Proliferation Treaty (NPT), of which the Islamic Republic is a signatory.

But the enrichment process can be diverted to military purposes, and the United States and European Union fear that Irans clerical regime is merely using an atomic energy drive as a cover for weapons development.

Iran has already taken initial steps to pave the way for uranium enrichment inside Iran.


Last week, Aghazadeh said Iran would give the outside world a 35 percent share in its uranium enrichment programme, allowing other countries to have a role in and monitor uranium enrichment at Iran’s facility in the centrally located town of Natanz, news agencies reported. Aghazadeh said at the time that giving other nations and foreign companies such a role was the “maximum concession” Tehran could offer.


In Vienna on Friday, a diplomat within the ranks of the UNs International Atomic Energy Agency (IAEA) confirmed that a position paper entitled “Elements of a Long-Term Solution” had been passed on to the Russians by the UN nuclear watchdog agency about a week ago, AP said.


The IAEA plans on November 24th to discuss whether to refer Iran to the UN Security Council for possible sanctions connected to its nuclear programme, representatives for the agency have said in recent week. .


Where Tehran ran afoul of the West

Iran triggered the latest stand-off in August when it effectively broke off negotiations on a package of incentives for restraining its nuclear plans and resumed conversion activities it had suspended a year ago.


The IAEA has demanded Iran return to a full freeze of enrichment-related work and return to negotiations with Britian, France and Germany. Iran says it is willing to negotiate, but not suspend all of its activities, AFP reported.


Asefi said Iran wanted to see a “balanced approach” to its nuclear programme, and repeated that talks needed to be widened to involve countries other than the so-called EU3.


He also reacted to reports that US intelligence officials have shown IAEA members a stolen Iranian laptop computer containing nuclear designs as proof the country is secretly pursuing a nuclear weapons programme.


The New York Times reported on its web site Saturday that during the demonstration of the laptops contents, which took place in Vienna in mid-July, officials displayed selections from more than a thousand pages of Iranian computer simulations and accounts of experiments, saying they showed a long effort to design a nuclear warhead.


“This is worthless and naive. We usually don’t carry our secrets around in laptops,” Asefi laughed when asked to respond to the report, AFP said.