Russia and the United States will today sign an agreement geared toward locking down tonnes of the worlds most dangerous and poorly guarded nuclear material under the aegis of a tri-lateral programme between the two countries and the UN nuclear watchdog, the International Atomic Energy Agency, or IAEA. 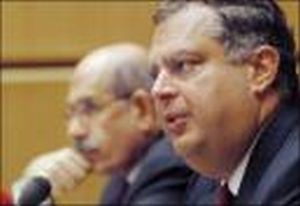 The focus of the $450 m US-Russian driven programme, called the Global Threat Reduction Initiative, is the result of long-unheeded warnings from scientists that supplies of highly enriched uranium, or HEU, at research and university reactors around the world are particularly vulnerable to theft by terrorists. The programme will retrieve HEU sent by Moscow to 20 reactors in 17 countries and ship it back to Russia for storage.

I am pleased to see US Secretary of Energy, Spencer Abraham join the chorus of voices that have called for more urgent action on this front. said Kenneth Luongo, executive director of the Russian-American Nuclear Security Advisory Council, which advises both governments on nuclear policy.

This was the right decision at a time when terrorist threats against the US are intensifying. Weve delayed too long and we need to move out rapidly on this mission.

Alexei Yablokov, one of Russia’s leading environmentalists and the president of the Moscow-based Centre for Ecological Policy of Russia agreed.

"This is a very good step, but the problem is that it should have been done long ago," he said in a telephone interview.

Over the years, the United States and Russia have exported several thousand tonnes of uranium—to such an extent that Yablokov believes it can never be entriely accounted for.

"In priciple, it is a very good idea to collect all used nuclear fuel which has been spread all over the world, but it is also an impossible task," he said.

"A huge amount of it will remain in reactors in different parts of the world, nuclear power plants in different countries will continue to be a powerful source of weapons-grade nuclear material."

For this reason, said Yablokob, the Global Theat Reduction Initiative is more a political than a practical step.

The returned HEU is slated to be stored at the Dmitrovgrad All-Russia Institute for Atomic reactors, known as NIIAR in its Russian acronym, according to Russian nuclear officials interviewed Wednesdday. Dmitrovgrad—situated to the east of Moscow—has been the beneficiary of much US threat reduction spending over the past several years to beef-up its security. Nonetheless, concerns about the safety of the material in Russia—where breaches are possible at even the most ostensibly well-secured sites are possible—remain high. Dmitrovgrad officials could not be reached for comment about the incoming HEU.

Nikolai Shingaryov, head spokesman for the Federal Atomic Enegy Agency, or FAEA—the successor organization to the Ministry of Atomic Energy after President Vladimir Putins government reshuffle last March—acknowledged Russias safety shortfalls Wednesday in a telephone interview. Nonetheless, he said Russia was up to the job.

"Our protection system against terrorist attacks must be modernized. We know this. We pay great attention to it." he said.

Nuclear experts believe successful implementation of the US-Russia Global Threat Initiative programme will need some $80 million in funding by US Congress over the next two years.

Whats the meat of the plan?
The plan to transfer the HEU is to spend more money and sharpen the focus of both the US and Russian governments to repatriate this fuel, Secretary Abraham told reporters in Vienna on Wednesday. He will formally sign off on the programme in Moscow on Thursday with Alexander Rumyantsev, head of the FAEA. US Ambassador to Russia, Alexander Vershbow, is also expected be in attendance, said members of the US embassy staff in Moscow.

"Where 100 years ago authorities had to worry about the anarchist placing a bomb in the downtown square, now we must worry about the terrorist who places that bomb in the square, but packed with radiological material," Abraham told an International Atomic Energy Agency conference on nuclear safety.

Accelerating and concentrating existing efforts, Abraham said, the Bush administration will target the most dangerous, least secure nuclear materials first. In seeking to convert research reactors in the United States and abroad to less dangerous fuel, the most vulnerable ones will take priority.

The target countries for the Global Threat effort
The programme covers fuel that the Soviet and Russian governments originally supplied to foreign atomic facilities. In some cases, those fuel shipments began as early as the 1950s. The United States also exported nuclear reactors and highly enriched uranium at the same time, starting with President Dwight Eisenhower’s "Atoms for Peace" programme. More than a dozen plants using that uranium are still operating in the United States and elsewhere, but these fuel suppliesaren’t covered under the new agreement with Russia.

Reactors in Uzbekistan, Belarus, Ukraine, Romania and Poland are thought to be among the highest priority targets for the upcoming clean-out, experts said.

Edwin Lyman, senior scientist in the Global Security Program at the Union of Concerned Scientists in Washington told the Knight-Ridder news service there are substantial quantities of highly enriched uranium in the former Soviet republic of Belarus.

Many bombs worth, he said.

Facilities returning their highly enriched fuel to Russia must agree to convert their reactors to operate on low enriched uranium, which is considered less of a proliferation threat.

Analysts say the DOE has dragged its feet
Abraham’s announcement, months in the making, comes after criticism from outside analysts and the US Department of Energy, or DOEs inspector general that the administration has been moving too slowly. US Auditors said in February that large amounts of highly enriched uranium produced in the United States were out of US control.

Just this week, a pair of Harvard University nuclear researchers, Matthew Bunn and Anthony Wier, said in a report that less fissile material was secured in the two years after September 11th, 2001, than in the two years before. The makings for an atomic bomb exist in hundreds of buildings in more than 40 countries, the report said.

Abraham—in Vienna to meet with Mohamed ElBaradei, director general of the IAEA—intends to acknowledge in his remarks Thursday during the Global Threat Initiatives formal singing that more must be done.

We would be fooling ourselves—and endangering our citizens—to think that these past efforts are enough, an advance text of Abrahams speech obtained by Bellona Web reads. It describes the 21st century’s greatest conflict as a battle between the civilized nations of the earth and the terrorists and terrorist states that would use devastating technologies to destroy them."

Research Reactors and the stuff of dirty bombs
Efforts to collect, secure and dispose of nuclear material began long ago, but the new programme offers an accelerated and more structured framework for the work, Abraham said in his address to the IAEA.

Dirty bombs use lower-grade radioactive isotopes, such as those used in medicine or research. If a dirty bomb were to be detonated, the radiation release probably would be small. Nuclear bombs, by contrast, have cores made of either highly enriched uranium or plutonium, materials normally kept under tight security.

Even so, the initiative includes a plan to convert research reactors using highly enriched uranium to lower grade fuel by 2013, Abraham said. IAEA chief Mohamed ElBaradei said there are 100 such reactors in 40 countries.

The biggest worry is that such reactors are usually poorly guarded.

Academic and research reactors at universities are simply not capable of providing a defence against a terrorist assault, said Lyman, according to Knight-Ridder. The great concern is a paramilitary-type assault on one of these facilities and the material is forcibly removed.

Lyman said a US government study found that thieves could carry off the uranium in a storage pool in about an hour.

Is Russia biting off more that it can chew?
The fuel coming back to Russia is expected to be stored at Dmitrovgrad, where it will be cooled and eventually downblended, as highly enriched uranium is in the US-Russian HEU-LEU agreement, which dilutes Russian HEU to LEU for sale to US nuclear power reactor operators.

But Russian officials say there is no storage room left at the countrys only spent nuclear fuel-reprocessing plant, the beleaguered Mayak Chemical Combine facility in the Southern Urals near Chelyabinks. Mayak is swamped with fuel taken from Russia’s northern fleet of rusting nuclear submarines and icebreakers. Indeed, most of the fuel being repatriated could not even be reprocessed with Mayaks equipment.

Scientists and some antinuclear activists are optimistic about the new fuel-return program, but they are also concerned that Russia is taking on large new imports of highly dangerous uranium. They point to Russia’s poor record in storing and safeguarding the atomic material it already has.

"Bringing all this back to Russia, yes, it’s a little paradoxical, given all the warnings about proliferation in Russia," said Lyman.

How far do US safety dollars stretch?
The US DOE is spending some $40 m to help the Russians improve security at nuclear installations.

Russian officials have also asked for field-sobriety kits to test guards at their nuclear facilities.

The new U.S.-Russia programme got something of a test run on August 22nd, 2002, when military forces from both countries raided a research reactor outside Belgrade, the capital of then Yugoslavia.

The 17-hour operation, which cost an estimated $7 m, reportedly netted 100 pounds of highly enriched uranium, enough for two nuclear bombs. Because US Congress imposes funding limitiations on American threat reduction efforts by stopping them short of environmental rehabilitation, however, the Washington-based Nuclear Threat Initiative, a nuclear research NGO, spent $3m of its own funding to cover that.

Two other collections were made last year—14 kilograms of highly enriched uranium from Romania in September and another 13 kilograms from Bulgaria in December. Experts from the IAEA also participated.