The set-back-plagued USRussian plan to destroy weapons grade plutonium in nuclear reactors has been delayed for at least another year, budget documents released last week by the White House show, leaving many experts on the US and Russian sides of the programme fearing that the job of destroying materials for thousands of nuclear bombs may never be accomplished.

Published on February 11, 2004 by Charles Digges 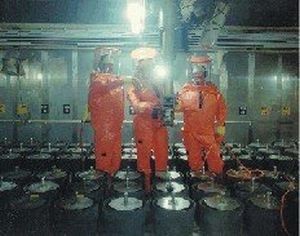 The plan was to have both countries build factories, in parallel progress, that could mix standard reactor grade uranium oxide with weapons-grade plutonium oxide—the material at the heart of many nuclear bombs—to be burned as a fuel called MOX in civilian reactors. It was conceived in the mid-1990’s at a time of intense concern over the security of weapons materials in the former Soviet Union.

Concern at the moment is even more intense, given that US war on terrorism might bring about the eventual use by terrorists of a radiological dirty bomb, and the high number of sites in Russia containing plutonium that remain poorly protected.

Russia agreed to the plan in 2000, whose main stipulation was that the United States and Russia would destroy 34 tonnes a piece of weapons grade plutonium each side had flagged as surplus—though both sides possess much, much more. America has declared it has 100 tonnes of the material in stockpiles. Moscow has released no figures, citing state secrecy, but most estimates put Russias stocks at 150 tonnes.

The point of the 2000 Plutonium Disposition Agreement, signed by then-US President Bill Clinton and Russian President Vladimir Putin was to ensure that weapons being disassembled by mutual agreement would never be rebuilt, and that the weapons plutonium, the hardest part of a nuclear bomb to make, could not be sold or stolen.

But the Bush administration’s budget plan for the US Department of Energy, or the DOE, released last week, said groundbreaking for a conversion factory planned for South Carolina had been delayed from July of this year until May 2005—the same year the US Cooperative Threat Reduction act contract runs out with Russia.

Stiff liability arrangements required by the US
The main reason for the setback is that the United States and Russia are deadlocked on the liability rules for American workers and contractors that would help build the Russian plant near Tomsk in Central Siberia, and the plant in the United States. Under the terms of the Plutonium Disposition Agreement, niether country can break ground for its plant first.

The 2000 agreement contains no liability language, saying only that liability requirements between the two nations would be worked out at a later date.

Administration officials want to use terms written for early nuclear agreements that protect American contractors from practically all liability in case of accidents involving the release of radioactive material, and then some. These terms, known as the 1992 Cooperative Threat Reduction acts Umbrella Agreement, are so sweeping that Russia is liable for everything from a nuclear accident to US contractor falling down the stairs of his own flat. Russia has refused these terms.

MOXs empty pockets
Another problem is that after almost seven years of effort, Western nations have not raised the approximately $2 billion that the Russians say they need to build and operate their conversion plant. Even the 2002 Group of Eight summit in Kananaskis, Canada, where member nations pledged Russia $20 billion over the next 10 years for nuclear dismantlement plans, has failed to do the trick. Britain, a G-8 nation, said recently that London was withholding any pledge toward the Russian MOX facility until the liability issue was resolved.

According to the latest US government figures, only $800m has been donated toward the construction of the facility, which is estimated to cost $2 billion.

Original plans too hasty
In 1997, when President Clinton’s energy secretary, Hazel O’Leary, announced that the United States would rid itself of weapons plutonium, she said burning it as fuel in specially retrofitted civilian reactors might begin by 2002. But even before the delay made clear in Bushs budget of last week, the American plant, estimated to cost nearly $4 billion, was expected to begin producing fuel only in 2008. The DOEs eventual plan is to pay the Duke Energy company to use the plutonium in its reactors.

The issue of delays is particularly delicate and pressing in South Carolina, as the DOE has already been shipping weapons-grade plutonium from its other weapons factories to its Savannah River Site, near Aiken.

In 2002, South Carolina sued the DOE in an unsuccessful effort to prevent the shipments. The governor at the time, Jim Hodges, said he wanted a binding agreement that the weapons plutonium would be disposed of elsewhere if the plant was not built. Hodges, who famously declared he would lie down in the highway to block plutonium shipments from entering South Carolina, said the new delay "leads me to believe there’s no serious commitment from the Bush administration," US press outlets reported. 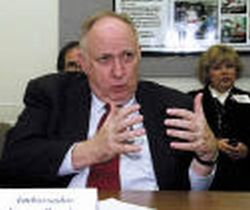 "I’m absolutely confident we’re going to resolve this," said Linton Brooks, the under secretary of energy for nuclear security and director of the National Nuclear Security Administration. But he could not say when.

"Nobody who tells you he can predict how long it will take is worth listening to," he told the New York Times.

He described the US-Russian impasse on liability as "a speed bump as opposed to a death blow." The money, he said, would follow quickly once an agreement on that issue was reached.

But a State Department official acknowledged to Bellona Web that "between the liability and details of financing, there’s a lot of things to iron out."

Brooks, in earlier interviews with American media blamed hold-ups in building a liability structure for the plutonium on the instability of the Russian legal system.

The Russian legal system is not yet free from manipulation, Brooks told reporters late last month.

One DOE official, however, debunked Brooks claim in an interview with Bellona Web.

That the Russian legal system is corrupt is not news, and it is shocking that someone in Brooks position would be at all surprised or deterred by that, said the official, on the condition of anonymity.

Brooks also brushed aside as nonsense, just absolutely nonsense, the notion that the administration has been using liability issues to achieve the slow death of the troubled and troublesome MOX programme.

The environmental response to MOX
Many environmentalists and NGOs, including The Bellona Foundation, oppose turning weapons plutonium into reactor fuel. Dr. Edwin Lyman, a senior nuclear physicist with the Union of Concerned Scientists and former director of the respected Washington-based anti-plutonium group, the Nuclear Control Institute, has argued that a reactor accident would be more serious if the fuel was MOX rather than simply uranium because the fuel’s constituents are more dangerous if released.

In Europe, some plutonium is recovered from spent fuel for reuse, and the Russians would like to do the same.

Nuclear experts at Bellona have long said the MOX disposition plan would leave Russia with a plutonium fuel fabrication factory that—after the agreed-upon 34 tonnes of weapons plutonium is processed—could turn its remaining weapons plutonium into reactor fuel, encouraging the creation and circulation of material that could be diverted into a closed plutonium fuel cycle, wherein spent weapons grade plutonium fuel is recycled for further use, posing an enormous proliferation hazard.

The leftover plutonium could also encourage the Russians to further develop their breeder reactor technology—technology it has had on the drawing board for years. Breeder reactors are essentially reactors that run off their own spent fuel—a sort of nuclear perpetual motion machine. But the technology is barely tested and, according to groups like Bellona and Lymans, extremely hazardous. The remaining plutonium could also be stolen by a terrorist or militant group or diverted into a weapons programme—an option that seems more likely given Russias ballyhooed nuclear war exercises.

By contrast, a DOE spokesman who spoke to Bellona Web on Monday, says the United States plans to bury American spent fuel, including the plutonium.

The plan for the South Carolina factory also faces hurdles. The consortium of contractors the DOE chose to build it, an affiliate of the Duke Power company—the Duke, Cogema, Stone and Webster engineering firm which was formed specifically to design the Russian and American MOX facilities—proposed to meet the limits for radiation releases at the plant by pushing the measurement boundary about five miles from the factory.

The DOE insisted that the boundary be the factory site perimeter, requiring changes to the safety analysis the consortium must submit to the Nuclear Regulatory Commission to win a license.