Recent billion-dollar commitments to environmental and disarmament efforts are laudable and necessary for a secure future, but they need a strong and informed coordinating body lest they encounter the familiar bureaucratic impasses that previous non-proliferation efforts have struggled with. 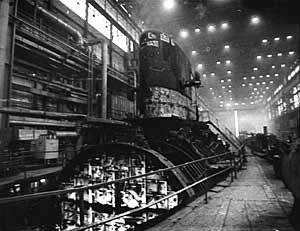 With the break-up of the Soviet Union 12 years ago, the world was presented overnight with the opportunity by newly democratic nations in Eastern Europe to destroy or secure literally thousands of nuclear weapons that had previously been intended to annihilate the West.

Western nations responded rapidly, and beginning with the inception of the US-driven Cooperative Threat Reduction, or CTR, programme, other countries joined the effort. The process was one of mutual consent between Russia and the West, according to Andrei Kozyrev, who was the Soviet foreign minister at the time of the failed coup by Communist hardliners and the creation of a democratic government.

Kozyrev said in a recent US appearance that there was no question that the Soviet arsenal had to be secured and partly destroyed by the new Russian leadership of Boris Yeltsinwho, along with heads of the Belorusian, Ukrainian and Kazakh Soviet republics, disbanded the Soviet state.

Kozyrev, who was the one member of Yeltsins staff who had a command of English, was given the responsibility of calling the US White House switchboardwhose number he found in his old phonebookto try to convince the notoriously surly and suspicious White House operators to put him through to President Bush, Sr. After 45 unsuccessful minutes, Kozyrev said, he finally reached a presidential aide and told him that the Soviet nukes werefor the time beingsecure.

In reality, it would take another 12 years before just 37 percent of Russias fissile materials were supplied with adequate security.

Yet, the slow but steady progress of the CTR programme, which annually costs the United States Pentagon $1 billion, has served as a model for other international programmes dealing with non-proliferation and nuclear safety in Russia and other former Soviet republics. It has also provided a model for tax and indemnity issues that surround nuclear dismantlementcalled the CTR Umbrella Agreementwhich places liability squarely on the Russians. The Russian side has traditionally been unhappy with liability elements of the CTR Umbrella Agreement. In a recent liability protocol enclosed into a new agreement signed by 10 European countries and the United States, Russias complaints were partially satisfied, and its liability softened.

The MNEPR Agreement
For countries other than the United States, one of the biggest impediments to securing nuclear waste in Russias Northwestand other regionshas been Moscows past insistence on taxing radiation safety equipment brought into the country and demands for partial liability including nuclear accidents as well as other work-related mishaps.

Struggles over these issue raged for four years until they were finally solved in large part because of the landmark Multilateral Nuclear Environmental Programme in the Russian Federation, or MNEPR, signed on May 21st in Stockholm, Sweden. It was signed by 10 nations: Belgium, The United Kingdom, the United States, Denmark, France, Germany, Norway, Sweden, the Netherlands, Finland, as well as the European Community and the European Atomic Energy Community, or Euratom.

The MNEPR agreement, like the CTR Umbrella Agreement, will nullify Russian value-added taxa levy that had previously been dictated by bilateral agreements that charged up to 20 percent extra for foreign equipment sent to Russia.

In MNEPR issues of liability are covered by a separate protocol called Claims, Legal Proceedings, and Indemnification. This liability protocol was developed as a separate document at the long-time insistence of the United States, said Norwegian Ambassador Torbjørn Norendal. This testy US relationship to MNEPR liability codes comes as no surprise, as CTRs Umbrella Agreementwhich is valid until 2006has stricter liability codes. Consistently with their position, the United States did not sign the protocol at the Stockholm ceremony.

MNEPR will be guided by the MNEPR Governing Committee established between the participating parties, and will include a representative from each government involved in any agreement taking place with the organization, MNEPR programme texts stipulate.

The Bellona Foundation views the recent signing ceremony in the Swedish capital as a major step forward for Russia and its European partners to tackle environmental problems. Bellona has been instrumental in advocating for MNEPR and drawing political attention from the European Parliament and the Russian Duma to navigate some of the treatys sticking points through the Inter-parliamentary Working Group established back in 1998.

–> What Needs To Be Done In Nuclear Russia And Who Will Do It?
The signing of the MNEPR agreement provides a 62m cash cow in environmental funding through the Northern Dimension Environmental Partnership, or NDEP.

On December 11th 2001, the Board of Directors of European Bank of Reconstruction and Development, or EBRD, which will manage the so-called NDEP Support Fund, approved the rules of the funds direction. On July 9th, 2002, the NDEP Support Fund was launched at a pledging conference in Brussels, co-chaired by the External Relations Commissioner of the European Commission, or EC, Chris Patten, Russian Vice-Minister of Finance Sergey Kolotukhin, and EBRD President Jean Lemierre.

At this conference, the Russian Federation, the EC, several financial institutions and five countriesDenmark, Finland, the Netherlands, Norway and Swedenannounced initial contributions totalling 110m to the NDEP Support Fund, of which 62m are earmarked for nuclear projects in Russias Northwest. The EC pledged 50m, while Denmark, Finland, the Netherlands, Norway, Sweden and Russia each pledged 10m.

Though the fund will be managed by EBRD, funding allocation decisions will be made by NDEPs Assembly of Contributors.

If NDEP is to tackle radioactive threats facing Northwest Russiathe 248 reactor cores, for instance, that are stored at Northern Fleet bases and are equivalent to 99 tonnes of uranium in spent nuclear fuel, or SNFit will become as determining an influence on the Northwests environmental issues as CTR has become for Russias non-proliferation efforts.

Of the 191 laid-up nuclear submarines in Russia, 115 are located at the Northern Fleet bases. Of those, around 70 still have fuel on board, and approximately 40 have been fully dismantled. SNF from more than 100 reactors is in storage at onshore bases and nuclear service ships, with some 130 reactor cores still on board retired submarines.

In the past, SNF from naval vessels was stored at pond-type storage facilities for 5 to 10 years before being shipped by train to Urals Mayak Chemical Combine. The Northern Fleet used to have two pond storage facilities for SNF, one at Andreeva Bay on the northwest side of the Kola Peninsula, and the other at Gremikha on the Peninsulas east.

After these facilities were taken out of service due to severe accidents, SNF was shifted to interim dry storageswhich have temporarily existed at both bases for almost 20 years. Now SNF is also kept onboard nuclear support ships, which are used for refuelling and defuelling. The SNF is also, famously, kept in the reactors of retired submarines. According to an SNF management department at the Russian Ministry of Atomic Energy, or Minatom, Andreyeva Bay has 21,640 SNF assemblies containing 35 tonnes of fuel material. Assuming that each reactor core contains around 230 nuclear fuel assemblies, this is equivalent to about 93 reactor cores.

Attempts At International Coordination
June of 2002 was marked by one of the more astounding funding proposals in non-proliferation historymembers of the Group of Eight industrialised nations, or G-8, met in Kananaskis, Canada and pledged $20 billion over the next 10 years to help Russia deal with its nuclear legacy.

Since the Kananaskis summit, the number of countries promising involvement in non-proliferation and environmental efforts in Russia has expanded almost exponentially. But while these commitments are well-intentioned and necessary, they are largely uncoordinated, leaving to each participating nation the discretion of what projects to undertake.

Harvard University nuclear expert Matt Bunn commented that his biggest concern about the G-8 initiative is the lack of structure from above.

There is a lack of any governing mechanism, and the governments are free to pursue whatever programmes they want, even if they are not the most needed ones, said Bunn.

Bunns point raises one of the most interesting conflicts to stem from the G-8 agreement: How much money should be spent on non-proliferation projects and how much on environmental efforts?

In Bunns view, one of the top priorities is protecting the remaining 63 percent of Russias unsecured fissile material, most of which remains housed, as it was in Soviet times, in rickety, poorly guarded shelters. Compared to that, he said, the submarine dismantlement issue is a low priority.

But from an environmental point of view, the submarine dismantlement project is perhaps one of the most important issues, and ecologists rejoiced when G-8 countries said they would commit money to dismantling non-strategic submarines not covered by CTRwhose mandate allows only for the destruction of ballistic missile submarines that once threatened the US national security.

–> MNEPR As An Organizing Body
Obviously, the tremendous expense of environmental and non-proliferation projects necessitates that involved countries combine their efforts. For instance, Norway, the United Kingdom and Sweden have all together committed to the safe storage of submarine-produced radioactive waste and spent nuclear fuel littering the Murmansk regions Andreyeva Bayan endeavour that so far has cost some $13m in research and preparation. But no matter how well these nations mean, such semi-jerry-built approach has the potential of producing chaos rather than resolution.

However, because the MNEPR agreement comprises all the European Nations and organizations that are interested both in environmental cleanup in Russias Northwest and guiding the direction of non-proliferation efforts, it is Bellonas assertion that representatives of the MNEPR nations could establish an unprecedented common framework for coordinating these issues.

Bellona’s Position—A Coordinating Structure Is Critical
There are literally dozens more environmental and non-proliferation projects to pursue before so much as a dent is made in the Soviet nuclear legacy. But as a process characterized by ad hoc agreements and disparate actions, the current progress of the G-8 pledge leaves each participating country with a carte blanche in the non-proliferation field. This is bound to result in redundancies, cost and schedule overruns, and project-scuttling frustration.

It is also uncertain what, precisely, the $20 billion pledge from the G-8 means. In Canada, each G-8 nation agreed to contribute $1 billion apiece for the next ten years to non-proliferation and environmental efforts in Russia, while the United States committed itself to fully $10 billion over that same time frame.

But does that mean that these nations intend to allocate these funds as fresh money, free from the contributions many of them have made to Russia prior to the G-8 conference? Or is this $20 billion to be calculated retroactively, subtracting donations already madein which case the United States could say it has already contributed $7 billion toward the G-8 pledge over the past 12 years though CTR.

Japan, likewise, could deduct from its $1-billion share those $36m it spent well before the G-8 conference on the construction of the Landysh liquid waste treatment facility, which serves the needs of Russias Pacific Fleet near the city of Vladivostok.

It is therefore the opinion of the Bellona Foundation that a structure be created to coordinate the multifaceted and often chaotic political and financial aspects of environmental cleanup and disarmament efforts of the dozens of countries involveda kind of a clearing-house about which government is doing what and what the most pressing, unresolved issues in Russias nuclear landscape are. Such a structure could regulate the traffic among worldwide disarmament officials to avoid duplicated efforts and streamline the overall drive to rid Russia of its dangerous nuclear arsenal and the effects it has produced.

The signing of the MNEPR agreement is a positive step in this direction because it creates the first commonly recognized legal platform on the basis of which various interested countries and institutions can make inroads into literally burying the remnants of the Cold War.