Quick on the heels of President George Bush’s State of the Union address, the White House this week plans to introduce expanded funding for the coming fiscal year for US programmes limiting the spread of nuclear technology and other weapons of mass destruction.

Published on January 30, 2003 by Charles Digges 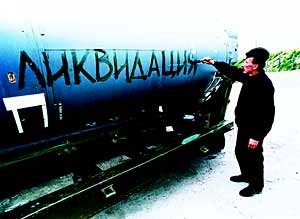 The increased commitment — details of which are not yet available — comes as a growing group of international non-proliferation and arms control experts are calling for a redoubled US effort to secure and eliminate nuclear, biological and chemical weapons in the former Soviet Union.

It also dovetails with calls from Senator Richard Lugar to expand cooperative threat reduction strategies to encompass a broader range of programmes and countries through the “10 plus 10 over 10,” or “Global Partnership,” commitment agreed to last June by nations of the Group of Eight industrialized nations. Under this agreement G-8 nations will contribute $20bn over the next 10 years for the purposes of securing the former Soviet Union’s legacy of Cold War weapons stockpiles. The United States, for its part, has pledged $1bn a year for the next 10 years to fulfil this agreement.

Referring briefly to the agreement in his State of the Union address Tuesday night, President Bush said that the United States is “working with other governments to secure nuclear materials in the former Soviet Union.”

“In all of these efforts, America’s purpose is more than to follow a process. It is to achieve a result — the end of terrible threats to the civilized world. All free nations have a stake in preventing sudden and catastrophic attacks,” Bush said.

Increased funding in fiscal year 2004
Earlier this week, Bush administration officials were quoted in the Global Security Newswire (GSN) as saying that Bush would substantially increase funding to US Department of Energy, or DOE, nuclear non-proliferation programmes in his fiscal year 2004 budget that will be submitted to Congress next week.

DOE Secretary Spencer Abraham on Wednesday was expected to detail the budget increases in a closed door meeting with non-proliferation experts at the Centre for Strategic and International Studies, a CSIS spokesman said.

An administration official quoted by GSN said “Abraham’s remarks will highlight the administration’s expanded and accelerated commitment to nuclear non-proliferation efforts,” adding that the fiscal 2004 budget request “will be a substantial increase from last year’s request.” According to some press reports, Bush could increase threat reduction spending by as much as 6.5 percent — equal to the overall boost US defence spending will receive.

Both the DOE and the Pentagon fund non-proliferation projects in the former Soviet Union under the aegis of the Nunn-Lugar programme, officially known as Cooperative Threat Reduction programme, or CTR. It is unclear how much additional spending will be requested for Pentagon programmes. For 2003, the DOE was allocated just over $1bn. The prior year, it received $750m.

DOE non-proliferation programmes with Russia include efforts towards providing secure storage for nuclear materials; shutting down Russia’s remaining plutonium-producing reactors in the closed nuclear cities of Seversk and Zheleznogorsk; and offering alternative employment to Russian former weapons scientists. The DOE is also responsible for facilitating the controversial bilateral agreement between Moscow and Washington to destroy 34 tonnes of weapons-grade plutonium each by burning it as mixed oxide, or MOX, fuel in conventional reactors.

Russia not happy about MOX
Both nations have agreed to produce and burn MOX in parallel, meaning that the developmental stages of the programme in the United States will have to be mirrored in Russia. After more than three years of negotiation, Russia in December said it would adopt a MOX fabrication design developed by Duke, Cogema, Stone & Webster, which will build an identical facility at the DOE’s Savannah River Site.

But financial problems remain on the Russian side and Moscow has estimated that it will take at least $2bn to simply get the MOX programme started. Besides the construction of the MOX fabrication factory, Russia would also have to adapt several of its VVER-1000 light-water reactors to burn MOX. Just this Tuesday, Alexei Lebedev, the head of the spent fuel division of Tekhsnabexport, or TENEX threw cold water on the MOX agreement.

“The problem of MOX fuel in Russia lies in the fact that VVER reactors aren’t really suitable for it: They have to be revamped. That is, you have to develop a whole new process,” said Lebedev, speaking in an interview with Nuclear.ru. He added that TENEX — the commercial fuel export wing of Russia’s Atomic Ministry, or Minatom — had not even taken up the question of developing MOX because “we don’t see any commerce here.”

There is also doubt about Moscow’s commitment to disposing of weapons-grade plutonium, which has long been viewed by Minatom as a valuable resource that would fuel its dreams of developing the BREST series of fast neutron, or breeder, reactors — reactors that both produce plutonium and consume it as fuel.

In a recent interview with Nuclear Engineering International, former Atomic Energy Minister Yevgeny Adamov, who maintains close and somewhat shadowy ties with Minatom’s current leadership, said “use of weapons-grade plutonium will become technologically and economically feasible when our BN-800 and BREST-1200 plants are built.”

DOE negotiators have repeatedly resisted Russia’s desire to upgrade its nuclear industry to a closed plutonium cycle with funds intended for threat reduction, and on Wednesday, it was unclear what DOE officials thought of recent remarks emanating from Russia’s nuclear elite. But if increased funding is to come for DOE programmes in Bush’s budget request, America will likely guide it toward the MOX agreement.

Arms control experts and legislators have criticized Washington’s wavering stance on threat reduction, blaming both the White House and Congress for hold-ups in funding

Senator Lugar criticises Administration’s response to crises
On the Washington Post’s opinion page earlier this week, Senator Lugar — who in 1991, with former Senator Sam Nunn, sponsored the Nunn-Lugar act — wrote: “Contrary to the media-inspired illusion that foreign policy is determined by a series of decisions and responses to crises, most of the recent failures of US foreign policy have far more to do with our inattention and parsimony between crises.”

“For example, in 2002, amid speculation about terrorists acquiring weapons of mass destruction, inaction by Congress effectively suspended for seven months new US initiatives to secure Russia’s immense stockpiles of nuclear, biological and chemical weapons,” Lugar wrote.

“Congressional conditions have also delayed for years a US-Russian project to eliminate a dangerous proliferation threat: 1.9 million chemical weapons housed at a rickety and vulnerable facility in Russia,” he wrote.

Lugar said one of five “campaigns” he will lead as chairman of the Senate’s Foreign Relations Committee will be to “expand and globalise the Nunn-Lugar programme,” as the overall threat reduction effort in the former Soviet Union.

“Since 1991 the Nunn-Lugar Cooperative Threat Reduction programme has worked effectively to safeguard and destroy the immense stockpiles of weapons of mass destruction in the former Soviet Union,” Lugar wrote. “We need to redouble these efforts and expand the process to all nations where cooperation can be secured.”