This Russian port city at the tip of the Eurasian continent is as far-flung as some of the polar ice-sheets Dieter Rudolph has visited as the project director for Arctic Military Environmental Cooperation (AMEC) organization, but on this mid-September day, it is a damn sight warmer.

Published on October 2, 2002 by Charles Digges 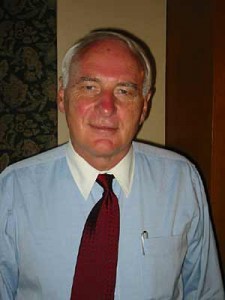 But it’s not the summery weather — which will turn into Russia’s characteristic coastal ice sludge within weeks — that has brought Rudolph and 250 other environmental, nuclear and naval experts to Vladivostok for the Ecoflot 2002 conference: It is one of the most heated issues concerning the world’s nuclear and environmental security — the disposition of the Russian Pacific Fleet’s rusting and polluting retired nuclear submarines.

If things, however, go as Rudolph hopes they will in Washington this week, as US congress debates the Homeland Defence and Defence Appropriations Bills, AMEC will be bringing some of its expertise and experience in ecological monitoring and nuclear waste management from Russia’s far north to its far east.

Funded and administered by the US Department of Defence (DOD) and the Norwegian and Russian Defence Ministries, AMEC is an exception among its American government-funded non-proliferation cousins like the Cooperative Threat Reduction act (CTR) or the weapons grade plutonium destruction programmes run through the DOE and State Department, in that AMEC’s charter allows it to pursue environmental issues.

Originally, said Rudolph, AMEC was conceived on a shoestring budget as an effort to protect Norwegian fishing territory from encroaching nuclear pollution by Russia’s nearby Arctic-based Northern Fleet. Talks on the programme began in 1996, and it was implemented in earnest in 1999. Since then — by the accounts of Russian, Norwegian and American officials — the AMEC programme has been a roaring success.

Rudolph would like to see that success translated to the problems of the Pacific Fleet, which presents many of the same contamination hazards that the Northern Fleet did when AMEC first began work. For the Pacific programme, the shoestring budget remains — AMEC is asking for $25-$30 million total for fiscal years 2003-2008 in the Defence Appropriations Bill, which duplicates the funding it has received for Northwest Russia.

Infrustructure
"We’re trying to get a sense of where the need is in the Pacific. I feel that in Northwest Russia, we have more equipment available to take care of things," said Rudolph in his easy-going manner in an interview in Vladivostok.

"There are three dismantlement sites in Northwest Russia and there are three active shipyards somehow I get the feeling that’s not all necessarily as available here."

"In terms of numbers, you may have more submarines awaiting full decommissioning in the Northwest, but the probability of rounding up these subs here in the Pacific is not as good as with the ones up there," Rudolph added. "You’ve got one guy here, another guy there, and they probably haven’t been maintained in as good a state as some of the others in the Northwest."

Familiar problems on the other side of the map
Interviews with Russian naval, nuclear and environmental officials gathered in Vladivostok confirmed Rudolph’s suspicions.

By 2010, the Russian Navy expects to take out of service around 200 submarines. In the Pacific, 77 retired submarines are currently awaiting decommissioning. Of those, 42 are still afloat and loaded with spent nuclear fuel — a nuclear waste storage method, by the way, that you will only find in Russia.

Of these 42 submarines, 39 have hulls so corroded and rusted by long years in the water that many cannot be safely towed to decommissioning points at the Zvezda plant at the town of Bolshoi Kamen for fear that they would sink en route, said Viktor Akhunov, head of the Ministry for Atomic Energy’s (Minatom’s) Ecology and Decommissioning Department. Many of them are at risk of sinking at their docks as it is.

Two of these 39 submarines have already had reactor accidents, said Vladimir Shishkin, chief designer of the Minatom’s Institute for Energy Equipment Research and Design, though he would not be more specific. An additional small number of retired submarines — though naval officials will not say how many or what kind — lie literally beached in Kamchatka. There are 22 submarines all together laid up in Kamchatka.

These ailing Pacific Fleet submarines, unlike their Northern Fleet counterparts, are spread out over several thousand square kilometres at bases from the Primorsky Krai, to Kamchatka to the Khabarovsky Krai. One plan forwarded by Shishkin is to corral the submarines into a specially-built shelter to store them until the fission capability in their nuclear reactors ends in about 300 years, essentially leaving them untouched for generations and hoping for the best.

Full decommissioning poses risks of its own. Besides the towing logistics, these old boats could explode during defuelling. Such an accident occurred during refuelling at the Chazhma Bay base in 1985, killing 10 men and causing widespread contamination. Less dramatic but equally deadly risks are long-term leakage, as well as low-level radioactive waste (LLW) generated by defuelling a submarine — an estimated two tonnes of this waste is produced by chemical washing of the reactor core alone.

The Pacific Fleet’s two waste storage facilities — one on Kamchatka, to the east of the Gornyak naval shipyard, the other on the southeast tip of the Shkotovo Peninsula, both of which hold low- and high-level solid and liquid waste as well as spent nuclear fuel — suffer from chronic leakage problems, space shortages and transportation woes.

Spent nuclear fuel (SNF) taken out of submarine reactors is being shipped to the Mayak reprocessing plant. But according to Eduard Avdonin, director of Minatom’s International Centre for Environmental Safety, the navy can’t scratch up a mere $7 million to repair a 27-kilometer stretch of railroad track to ship SNF from Zvezda to the nearest railhead that would take shipments to the Mayak reprocessing facility in the Urals.

But even that 10-day journey to Mayak is fraught with worry: While fresh fuel is shipped on guarded tracks, SNF travels down unattended civilian railways.

For now, the waste is delivered from Zvezda to the train station over a rough road in trucks that have been known to leak, and naval officials confirmed the road is shut "a number of times a year" while technicians deal with the consequences of small-scale spills.

On top of this is a decades-long legacy of sanctioned contamination at sea. Until 1993, it was the Russian Navy’s policy to dump low-level liquid nuclear waste in the Sea of Japan before returning to base. Matters will hopefully improve following the joint Russian-Japanese construction of a giant liquid waste treatment barge that went into service in 1998.

Even though the problem of dumping at sea remains edged in memory thanks to footage shot by military journalist Grigory Pasko in 1994, which was later aired on NHK Japanese Television.

But instead of leading to tighter controls at that time, this footage prompted treason charges for Russian military journalist Grigory Pasko, whose own reporting on Russian naval dumping had attracted attention in Japan. In December 2001, Pasko was sentenced to 4 years in a labour camp for intending to pass information on secret naval manoeuvres to Japanese journalists.

Where AMEC would fit in?
The Pacific Fleet is now much like AMEC found the Northern Fleet in 1996 — a potentially catastrophic collection of latent and actual sources of nuclear contamination that threaten to destroy surrounding marine ecosystems. The Northern Fleet also had its own whistle-blower, Bellona’s Aleksander Nikitin, who, too, was battling treason charges for exposing radioactive dangers when AMEC got its start.

Where AMEC would fit — in broad terms — is in preventing pollution in the Pacific Fleet area from getting worse by intensive monitoring of the areas where solid and liquid wastes are stored, and by examining vessels awaiting decommissioning, said Rudolph. AMEC would also push for programmes improving the safety of workers involved in dealing with radioactive material.

Perhaps the most state-of-the-art bit of gadgetry that would help fulfil most of those goals is the so-called PICASSO AMEC system of environmental monitoring, which was developed by Norway for Northern Fleet bases. Relying on similar technology that has been used to monitor systems as diverse as nuclear power plants, paper mills, and telecommunication networks, the PICASSO AMEC employs a series of sensors that transmit their data back to central and remote control posts.

This technology may soon see a new application during submarine dismantlement, gauging the radiation emissions that are a part of the process. Further, it may be put to use monitoring those 42 foundering submarines loaded with SNF that the Russian Navy says may sink from corrosion. The system would provide multiple layers of monitoring — both locally and from offsite — that would increase the Russian Navy’s ability to detect elevated radiation levels and decrease the response time should a problem arise. Additional remote stand-alone monitoring would add to safety.

An aspect of the system is getting a test run at the civilian nuclear icebreaker operator Atomflot, near Murmansk, where sensors are affixed to a pad for SNF containers to monitor for contamination. Norwegian environmental officials will be provided with remote readouts of the data.

The pad, which holds 19 casks of SNF, is scheduled to go into operation later this autumn. And shipyard Zvezdochka, in Severodvinsk, has built a pad with a capacity for 60 casks — enough space for fuel for 12 two-reactor submarines. The Pacific Fleet is scheduled to receive an AMEC monitoring pad with an 80-cask capacity.

The casks themselves — a 40 tonne transport vessel designated as TUK-108/1 — are also designed with AMEC economic assistance, and have been incorporated into a submarine spent nuclear fuel storage programme at Atomflot, Zvezdochka and Mayak, which is being negotiated by CTR and other international donors.

"If you think ahead, and take those sensors and put them on subs that are awaiting dismantlement, you’ll have a terrific warning system, because the Russian Navy is very concerned about the condition of those vessels," Rudolph said.

"The submarine monitoring system is not installed anywhere yet, but once the Russians see it work, then hopefully they’ll say they want to install it in some places. It’s really their call."

Indeed, most of the bill for PICASSO AMEC would be footed by the United States and Norway. All the Russians have to do is say yes.

"Typically Norway and the US will fund most of the direct efforts, and Russia will kick in Minatom funds for specific projects, and then there are in-kind contributions — for instance, the use of a Russian naval base, the use of guards, the use of brains."

As one of the cheapest multi-government programmes focused on nuclear safety in the former Soviet Union, AMEC has spent a total of $41.5 million since its inception. Of that, Norway has contributed $10 million, the United States $25 million, and Russia $6.5 million.

By contrast, the DOE is asking for $420 million for its Russia projects from the Defence Appropriations Bill for fiscal year 2003 alone. Many millions of this will go toward the continuing battle over plutonium disposition via the MOX fuel programme, which after eight years on the drawing board is no closer to realization today than it was when it was first conceived.

Such comparisons, however, are not likely to assure hands-down passage of AMEC’s new plans in US Congress, especially at a time when America’s defence expenditures are dictated almost wholly by perceived terrorist threats.

Having coffee in Vladivostok while his staffers back in Washington hash out the final language for AMEC’s inclusion in the Defence Appropriations Bill, Rudolph said he was fielding daily queries from home about how to respond to congressional questions.

"Some of them are really surprising. They’re asking things like what we plan to do about nuclear terrorism and such," he said.

"I think that by preventing the backlog of radioactive material here, by supplying monitoring equipment at radioactive waste sites and for submarines, we will have gone a long way toward preventing this stuff from falling into the wrong hands."