Published on August 7, 2002 by Charles Digges 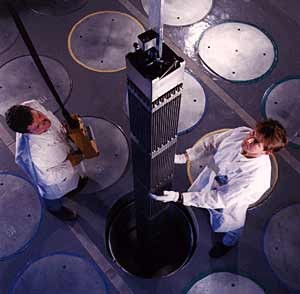 The MOX program is one of the US Department of Energy’s, or DOE’s, flagship non-proliferation agreements with Russia, involving the future destruction of 68 tonnes of surplus US and Russian weapons-grade plutonium in rectors in the form of a special fuel comprised of plutonium and uranium oxide, called MOX.

But the decade-old program — which so far hasn’t resulted in the burning of any MOX — has hit continual bureaucratic snags and opposition, mostly from the Russian side, which, despite the agreement, is still quietly opposed to destroying its 34 tonne portion of the plutonium. The United States has made no progress burning its own surplus plutonium cache either.

Standing agreements about the location of the MOX fuel’s industrial-scale fabrication had specified well equipped and better technically suited Zheleznogorsk Mining and Chemical Combine, or GKhK, near Krasnoyarsk — which has a vast array of underground labs — as the site of choice.

But according a document obtained by Bellona Web, and interviews with officials close to the project who authored that document, Minatom — in a decision driven by First Nuclear Power Minister Mikhail Solonin — plans to scrap GKhK as the MOX production facility in favour of the Urals Mountains Mayak facility, whose environmental fitness for an undertaking of this magnitude is severely impaired.

In fact, the suggestion will likely be turned down by Russia’s nuclear regulatory body, Gosatomnazor, or GAN, unless unprecedented pressure is brought to bear on the nuclear watchdog.

No official announcement of this switch in venue is scheduled until October, and indeed, Minatom this week refused to acknowledge that any relocation has taken, or will take place. In fact, in recent press reports, Solonin himself still refers to GKhK as the site where the MOX fabrication will take place.

But administration officials at the Zheleznogorsk GKhK, told Bellona Web that rumours were already circulating that the combine will be passed over in favour of Mayak, representing a bitter financial blow to Zheleznogorsk.

By 2006, the closed nuclear city’s plutonium reactor is scheduled to be shut down as part of another US-Russia non-proliferation agreement which will effect the employment of one out of every five nuclear workers in the city, the administration official, who spoke on the condition of anonymity, said.

"We needed those MOX fabrication jobs," he said. "Now our only hope is storing foreign spent nuclear fuel at RT-2, which isn’t even finished yet."

State department "hijacking"
Another blow to the MOX program, according to the sources, came when the US State Department "hijacked" an agreement with Solonin by signing off on a plan to use Russia’s BN-600 fast neutron reactor and retrofitted VVER-1000’s to burn the fuel.

The so-called steering committee protocol, signed by Solonin and State Department non-proliferation negotiator Michael Guhin, includes no timetables, and actually eliminated the fast track start date for the plutonium disposition program. State Department officials contacted this week said they had no comment to offer on the protocol.

According to the document sources, the protocol offered no new information about the reactors, which have long been the DOE and Minatom’s leading candidates — for lack of better current options — for burning MOX. But the protocol did include a provision offering Mayak as a possible site for industrial level production of MOX at the woefully inadequate Mayak, the sources said.

Just hours after that deal was signed, however, Solonin’s own staff at Minatom was quietly celebrating what they called a "non-decision" with Guhin, and toasting a protocol that would delay the MOX plutonium project for at least two years, if not indefinitely.

Many DOE officials were, according to the sources, fuming at the intervention of the US State Department, which has postponed — yet again — the beginning of the MOX plutonium disposition project perhaps indefinitely.

Ed Siskin, the DOE’s chief of Fissile Materials Disposition, who was in Moscow for the meetings, declined comment.

Mayak vs. GKhK
Long standing plans among the Russian, French, German and US government — who have all had a technical hand in the MOX project — have stipulated that the conversion of weapon’s grade plutonium would be taking place at Mayak. The plutonium oxide — a powder fit for transport in special barrels —would then be shipped to Zheleznogorsk GKhK, and its copious underground tunnels and labs for the large scale and hazardous industrial production of MOX.

But the authors of the document passed to Bellona Wed — who were members a French-German-Russia-US side-delegation during last week’s visit to Moscow by US Energy Secretary Spencer Abraham, wrote in their jointly prepared document, that "Minatom has backtracked on its previous site selection for the French-German-Russian MOX fuel fabrication plant."

This decision, according to authors of the statement — who have requested anonymity — "has drastically changed the programme and threaten its ultimate viability."

The document also said that the tripartite government agreement between France, Germany and Russia had expired in June and that Germany — which had been slated to provide much of the technology needed for the MOX fabrication — has withdrawn from the project altogether.

"But Solonin wants it at Mayak."

Aside from being first deputy nuclear minister, Solonin is the former head of Moscow’s Bochvar Institute for nuclear research and development, which has bosom ties with Mayak.

Mayak’s off-sight engineering and scientific research is done at Bochvar labs, and the industrial production of MOX at Mayak, if given the nod by Solonin, could mean lucrative research and development contracts for Bochvar.

"Solonin, was nominated to his current position earlier this year," the joint statement by the MOX delegation read. "He is now suspected of steering work away from GKhK to Mayak and his former institute, the Bochvar Institute."

The document said that Solonin’s reopening of the question about where the MOX will be fabricated "may delay the MOX production facility’s commissioning by at least two years because of the significant progress made" on designing the fabrication facility to the specifications of Zheleznogorsk’s GKhK.

As evidence of Russian stalling tactics, the document cited Minatom’s continued failure to sign a so-called Justification of Investment for the GKhK, and noted that "the creation of a similar document for a new site may require an additional two years simply to return the programme to its current status."

"Bochvar is a mafia scientific organization," said one of the documents authors in an interview with Bellona Web. "

"It wants all the money channelled through it. So if Mayak gets the mass MOX production, then Bochvar will be skimming millions of dollars in worthless, needless research and development. If its GKhK that gets the contracts, Bochvar doesn’t get any money — it’s as simple as that."

Despite several attempts to contact First Deputy Nuclear Minister Solonin, and messages left with his staff, he could not be reached for comment.

Nikolai Shingarev, who heads Minatom’s department for relations with government bodies and information policy played down the apparent switch of fabrication venues in an interview with Bellona Web by saying "it will be a long time before we reach a stage where we are ready to process MOX fuel at industrial levels."

"Whether this happens at GKhK or Mayak is not really the issue now — there are still many, many experiments that have to be done."

A spokesman for Bochvar said the institution was "only interested in the best possible process and the possible place for making MOX," but would not comment on whether he thought that place was Mayak or the GKhK. "This will be decided later," he said, but would not confirm if he meant the scheduled announcement date of October, when the sources said GKhK would be announced as the loser in the race for industrial production of MOX.

Minatom’s plans
According to one of the sources behind the document, there may be other motives behind the wrench Solonin just threw into the works by quietly moving industrial MOX production over to Mayak.

"The big problem with this is that the Russians never wanted the MOX programme," said the source.

"The Russians would rather store the plutonium and eventually use it in the BN-800 reactor," he said referring to a reactor that currently exists on paper but has the possibility of burning both MOX and pure plutonium. He went on to say that destroying plutonium now would interrupt plans for constructing a closed plutonium fuel cycle in Russia’s future.

"What they want to do is recycle their nuclear arsenal, not destroy it," said the source. Indeed, he implied that the plans to fabricate MOX at Mayak may only be a stalling technique — which would nonetheless line Bochvar’s coffers with research contracts.

"Mayak is a really stupid choice because the regulatory bodies, unless you really lean on them very heavily, are not going to approve the plans because of environmental issues," he said.

A spokesman for Yury Vishnevsky, who heads Russia’s nuclear regulatory body Gosatomnadzor, or GAN, told Bellona Web flatly that "Mayak is the worst possible place for industrial MOX fabrication and I am sure we will do all we can to oppose it."

But that may be part of the plan. Rejection of the Mayak option would send the whole plan back into the bureaucratic mill and delay the program even further, buying Minatom time to pursue other options to keep its 34 tonnes of plutonium from being destroyed.