The US, Russian and Norwegian Arctic Military Environmental Cooperation (AMEC) will continue its work on nuclear safety in the north. United Kingdom may join the successful team. 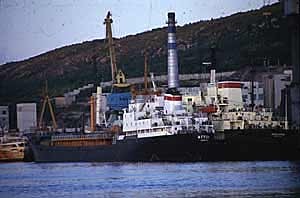 The current US involvement in the AMEC programs runs out on September 31st this year, and previous signals from the US State Department suggested pulling out of the co-operation due to the lack of the infamous umbrella agreement on tax and liability issues with the Russian Federation. Norway, who has its own bilateral liability agreement with Russia through its plan of action for nuclear safety, has said a continued US involvement is essential for its own participation in AMEC.

Ministries of Defence in Norway, Russia and the USA manage the programs under AMEC. Most of the programs are related to nuclear safety, including the development of a prototype 40 tonnes cask for submarine spent nuclear fuel, storage and transportation containers for solid radioactive waste and currently a facility for compacting radioactive waste from decommissioned Northern Fleet submarines.

While the uniform-officials from Pentagon and the Russian Navy have a good working relation, their civilian dressed colleges in the US State Department and the Russian Ministry of Foreign Affairs have been arguing for years about the liability and tax issues, without coming to an agreement. 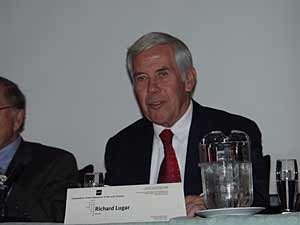 Senator Richard Lugar urged State Department
At late April NATO-conference in Moscow on issues related to decommissioning of Russian submarines, US officials involved in the AMEC programs were not too optimistic about the future. This issue was of great concern to the representative from the Norwegian Ministry of Defence. The future of the AMEC programs was also highlighted at a conference held in Oslo on June 1st, where US Senator Richard Lugar and former Senator Sam Nunn met with Norwegian officials and NGOs, among them the Bellona Foundation.

Senators Nunn and Lugar initiated the first US support programs to aid Russia with securing its nuclear material and decommissioning of strategic submarines in the early 1990s when the collapse of the Soviet Union was a fact. The Nunn-Lugar program has been working closely with AMEC. For instance, the prototype storage container for naval spent nuclear fuel and the pad for their storing at nuclear powered icebreakers base Atomflot in Murmansk are developed with AMEC money, but will be used by the Nunn-Lugar program.

Coming back to Washington after his Oslo meetings, Senator Richard Lugar wrote to Deputy Secretary Richard Armitage urging the State Department to maintain a leadership role in the AMEC. Lugar said it was important for the US to continue to participate with technical support, even if an umbrella agreement on tax and liability with the Russian Government could not be reached.

— The State Department is committed to maintaining a leadership role in the AMEC program. I wish to assure you that the United States will remain an active participant in the program providing leadership to the trilateral process and the sharing of technical knowledge, even if the negotiations do not produce an acceptable trilateral agreement in the near term. The United States will continue to work closely with Norway to meet common challenges posed by former Soviet military equipment and installations in northwest Russia.

Positive change
The positive change of minds in the US State Department opens for an even more active military cooperation in the north to secure spent nuclear fuel, radioactive waste and to solve other military related environmental challenges. So far, Norway has donated $10 million, US has contributed with $25 million and Russia has put in $6.5 million into various AMEC projects.

The three countries have also had talks with the United Kingdom aimed to expend the success with yet another country. In March 1999, British foreign minister Robin Cook visited Murmansk and stated:

— The British Government is determined to tackle the problem. We are keen to work with them. So, too, is the British nuclear waste management industry.

Later the same year, Cook announced a £8 million commitment to nuclear safety in northwest Russia. So far, this money is still on account in London, and Great Britain sees the AMEC cooperation as a good way to involve itself into the ongoing nuclear safety programs.