A half dozen aged single-shell underground storage tanks at the US Hanford Nuclear Reservation along the Columbia River in Washington State have been found to be leaking radioactive leaking highly radioactive sludge into the soil, the head of the US Department of Energy said over the weekend.

Published on February 25, 2013 by Charles Digges 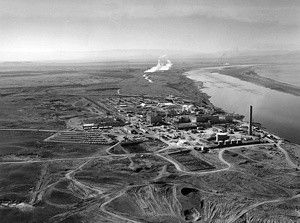 The DOE has said the leaks pose no immediate danger to human health, but neither Washington Governor Jay Inslee nor Bellona General Manager and nuclear physicist Nils Bøhmer immediately support that conclusion, saying that the extent of the leaks, and how long they have continued has yet to be ascertained.

“(US Energy) Secretary (Steven) Chu advised me we have six leaking single shell tanks at the Hanford site, not just one as was previously reported,” Inslee said in a statement to Bellon over the weekend.  “The amount of leakage varies from tank to tank. There may be more.”

“We are following these developments very closely and have followed them for a long time,” Bøhmer said. “We are very concerned, and the leakages is only going to grow.”

The 1450 square kilometer Eastern Washington reservation needs a “new action plan,” in the governor’s opinion, to clean up radioactive waste that dates from the World War II Manhattan Project.

Hanford is one of three the Cold-War legacy sites that Bellona closely watches; the other two are Britain’s Sellafield site, and the Mayak Chemical Combine in Russia, which also developed their respective countries first nuclear weapons.

A “stabilization” program for Hanford’s 149 single shell tanks was completed in 2005, the governor’s office told Bellona, but thousands of liters of sludge remain even though liquids were pumped out of the tanks.

US federal budget talks coming up this week, in which no apparent Republican-Democrat consensus can be reached, further jeopardize cleanup of the leaking tanks.

The tank “farms” once held 200 million liters of radioactive waste, the legacy of 45 years spent manufacturing plutonium for the Manhattan Project and Cold War-era nuclear weapons.  Plutonium for the atomic bomb dropped on the Japanese city of Nagasaki came from Hanford.

Governor Inslee traveled to Washington, D.C. to discuss the problem with federal officials – including president Barack Obama ­– learning in meetings Friday that six tanks, rather than one, are leaking.

The leaking waste levels in the six tanks were missed because only a narrow band of measurements was evaluated, rather than a wider band that would have shown the levels changing over time, Inslee’s office said by email.

The DOE said in a statement that there was no immediate health risk and that federal officials would work with Washington state to address the matter.

“None of these tanks would be acceptable for use today. They are all beyond their design life. None of them should be in service,” said Tom Carpenter of Hanford Challenge, a Hanford watchdog group. “And yet, they’re holding two-thirds of the nation’s high-level nuclear waste.”

The Hanford Reservation was built along banks of the Columbia River so its reactors would have a ready source of cooling water.  A part of the reservation is now the Hanford Reach National Monument, designated by President Clinton.

The Columbia River’s last big wild migrating fish population, the fall Chinook salmon run, spawns in the Hanford Reach.  The stretch of river is known for its wildlife populations, large numbers of pelicans, and the white bluffs on the north side of the river.

The large-scale effort to clean up Hanford is nearly a quarter-century old.  Hanford was the Washington state’s largest recipient — more than $1 billion — of federal money under President Obama’s stimulus program in 2009.

The money was meant to begin construction of a vitrification plant that will eventually turn radioactive waste to glass and permanently isolate it from the environment.

But the vitrification plant is years behind its original schedule and far over budget.  Before the project can go ahead, the DOE plans a full-scale mockup demonstration to show that its as yet untried technology can work.

But Bøhmer noted the US government has been spending $2 billion a year – one-third of its entire budget for nuclear cleanup nationally ­– to keep the underground sludge tanks, as well as cleanup from previous leaks under control, and that these expenditures are proceeding with no discernable results.

“What is frightening here is not the money,” said Bøhmer. ”Authorities have spent a lot of time and money on Hanford’s problems, but it is not achieving any particular effect.”

The DOE has said it expects funding levels to remain the same for the foreseeable future, but a new DOE report released this week calls for annual budgets of as much as $3.5 billion during some years of the cleanup effort, the Associated Press Reported.

In the meantime, the Washington state will insist on additional federal monitoring, and wants sludge pumped out of the 149 single-shell tanks and into double-shell tanks, The Seattle Post Intelligencer reported.   The first tank to be confirmed as a leaker — T-111 — still contains more than 1.6 million liters of radioactive sludge.  T-111 was originally built in 1943-44.

But Bøhmer said that simply migrating the radioactive sludge was a daunting undertaking that guarantees no stoppage to the leakage.

”It is extraodinarily difficult to clear the tanks, and in the meantime more and more of them will begin to leak,” he said

Past efforts that have failed

The Department of Energy has tried a variety of approaches and contractors at Hanford.

Hovering over the Hanford cleanup, and coming in a week’s time, is a sequestration of federal spending that will cut US federal programs across the board — from rangers in Olympic National Park near Hanford to aircraft controllers to civilian Army and Navy personnel at Washington’s Puget Sound-area bases, all of which will mean sever cuts in observation of the facility.

“To see Hanford workers furloughed at the exact moment we have additional leakers out there is completely unacceptable,” Governor Inslee’s office said in emailed statements.

Neither has said anything about Hanford or sequestration of federal spending.  The House Republican leadership has indicated that it will allow the cuts to take effect, the paper reported.

A frustrated first term US Democratic Representative Denny Heck, has commented:  “The appropriate parties are not even talking.”

President Obama has called Republican leaders in recent days.  After meeting with the President, along with other governors, Inslee told the press Friday:  “Unfortunately, he has not found anyone to deal with across the aisle.”

The federal government built the Hanford facility to produce the plutonium bomb dropped on Nagasaki, leading to Japan’s surrender in World War II three days after a uranium bomb was dropped on Hiroshima.

The remote Hanford continued churning out plutonium to build the US nuclear arsenal.

Today, it is the most contaminated nuclear site in the country.

Several years ago, workers at Hanford completed two of three projects deemed urgent risks to the public and the environment, removing all weapons-grade plutonium from the site and emptying leaky pools that held spent nuclear fuel just 400 meters from the Columbia River.

But successes at the site often are overshadowed by delays, budget overruns and technological challenges. Nowhere have those challenges been more apparent than inHanford’s central plateau, home to the site’s third most urgent project: emptying the very tanks that are so prone to leakage.

An estimated 4 million liters of radioactive liquid has already leaked there since the site was finally closed in 1988. It began operation in 1943.