The Russian Ministry of Defense says it is planning to raise and scrap two sunken nuclear submarines from the depths of the Barents and Kara Seas in an effort to stem radioactive contamination from the vessels, whose reactors are both loaded with spent nuclear fuel, Izvestia newspaper reported.

Published on October 12, 2012 by Charles Digges 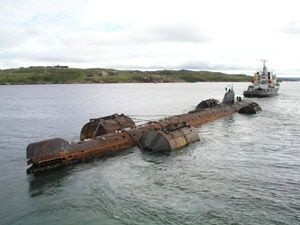 The ministry said it will announce an international tender, which may include companies from the France, the Netherlands, South Korea and United States, as the Russian Navy does not have the necessary equipment to carry out deep-sea salvage operations, Izvestia said, citing a military source that the paper did not name.

The source reported that the project to lift the two submarines, the K-27 and the K-159, is a part of a revised government draft for strategic development of Russia’s Arctic zone.

“A broad range of measures for cleaning Arctic waters of pollution is specified [in the draft],” the source told Izvestia.  “In addition to the sunken submarines, particular attention is given to removal of dangerous waste left behind after the military units on Franz Josef Land, New Siberian Islands and Bely Island,” said the source.

Indeed, an accumulation of reports from Russia to the Norwegian Radiation Safety Authority (NRPA) reveal the Soviet and Russian Navies littered the Kara Sea with all manner of nuclear and radioactive waste over a period of decades, stopping in the early 1990s.

Promises to life the subs have gone unfulfilled before

Given the number of years the Russian government has been speaking of lifting these submarines for appropriate scrapping, however, leaves room for skepticism that renewed promises will reach fruition.

Igor Kudrik, a Bellona expert on the Russia Navy and nuclear waste noted that it was the responsibility of Russia’s state nuclear corporation Rosatom to deal with raising the submarines, and characterized the Defense Ministry’s involvement with the project as “very strange.”

“If the Defense Ministry is in charge, we fear for transparency of the project. And, of course what help can be marshaled remains to be seen,” he said. “No agreements or governmental decisions are in place as of today that authorities will follow through on the pledge.”

The K-27 was recently the subject of a Russia-Norwegian joint expedition to determine whether radioactive contamination around the vessel has increased since it was last measured in 2000. The preliminary findings released late last month indicated it had not.

But dangers of an uncontrolled chain reaction and nuclear explosion in the vessels two liquid metal cooled reactors remains a concern to Norwegian and Russian authorities, both of whom have said that lifting the K-27 should be a priority.

The K-27 was intentionally sunk by the Russian Navy in 1981 after suffering a radiation accident in 1968 that killed nine sailors. It was scuttled in Stepovogo Bay in 50 meters of water near the Novaya Zemlya archipelago, a former – and perhaps future – atomic bomb testing range.

The K-159 was taken out of service in 1989, and is considered one of the most radioactively dangerous objects on the bottom of the Arctic seas, though Russian authorities have repeatedly said the vessel is not leaking. 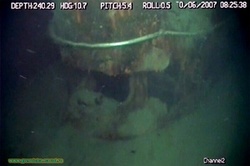 Its sinking posed more of an embarrassment to the Russian Navy when it was swamped with 800 kilograms of nuclear fuel in its two pressurized water reactors in August 2003 while being towed from Gremikha, a former naval base, to the Polyarny shipyard, where it was to be dismantled.

The sinking killed nine sailors, who where aboard the rusted-out hulk of the sub to plug leaks, constituting the worst Russian Navel disaster since the sinking of the Kursk during naval excersises in August 2000, killing all 118 sailors aboard.

Two Dutch companies, Mammoet and Smit International – who are said by the Izvestia source to be under consideration for the K-27 and K-159tenders – were contracted by the Russian government and salvaged the Kursk in 2001.

The K-159 and the tugboat hauling it ran into heavy weather, sinking it in 185 meters of water and prompting an overhaul of the Russian Navy’s practice of towing derelict subs.

It also posed uncomfortable questions to Norway, which had helped finance the dismantling of decommission Russian submarines using the same unsafe towing methods.

Immediately after the K-159’s sinking, then deputy head of the Central Headquarters of Russia Naval Command, Viktor Kravchuk, issued a promise that the vessel would be salvaged.

That pledge was followed by several more years of promises from the Navy that that vessel would be raised, none of which ever materialized.  The last serious promise to salvage it came from then-chief environmental safety officer for the Russian Navy, Alevtin Yunak, in 2008. The issue laid low until the Defense Ministry made yesterday’s announcement.

In November, the K-27 issue will be discussed at an international conference on nuclear safety in Moscow, arranged by Norway, Sweden and Russia, the Barents Observer news portal based in Kirkenes, Norway reported.

However, the wreck of another sunken submarine, the Komsomolets, will most likely forever remain at the site where it sank in a 1989 accident, as a salvage operation would be too costly and dangerous, Izvestia said.

The K-278 Komsomolets nuclear submarine sank in the Norwegian Sea on April 7, 1989, south of Bear Island. The submarine sank with its active reactor and two nuclear warheads on board, and lies at a depth of 1,685 meters.