MOSCOW/MURMANSK – Activists across Russia Thursday used the 26th anniversary of the disaster at Chernobyl to spotlight ongoing problems in the country’s ailing nuclear industry – many of which demonstrators say could lead to a Chernobyl take two as government and industry officials persistently ignore the lessons of Fukushima. 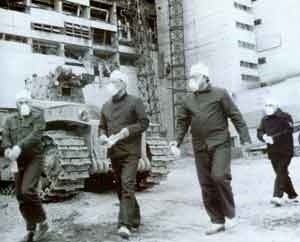 Cities across Russia greeted the anniversary of the Chernobyl disaster – the worst nuclear catastrophe in the history of mankind – with protests, gatherings and demonstrations that spanned all nine of its times zones.

Meanwhile Viktor Yanukovych, president of Ukraine – Chernobyl’s post-soviet home – vowed Thursday that his country is committed to building a new, safer shelter over the damaged Chernobyl reactor as Ukrainians, Belarusians and Russians marked the 26th anniversary of the world’s worst nuclear disaster.

Memorials for Chernobyl’s victims were held in Moscow, Murmansk, Murom, Nizhny Novgorod, Kazan, Kostroma and St. Petersburg as well as other cities. They were joined by in other cities in Europe and the Far East, as memories of the world’s most recent nuclear disaster at Fukushima in Japan on March 2010 are still fresh.

In Ukraine, Yanukovych took part in a ceremony to inaugurate the initial assembly of a gigantic steel-arch to cover the remnants of the exploded reactor No 4.

The arch – weighing 20,000 tons and big enough to house New York’s Statue of Liberty – is due to be completed in 2015, when the delicate and dangerous job of dismantling the reactor and cleaning vast amounts of radioactive waste can begin.

Meanwhile, radioactive material spread across much of northern Europe and reached as far as the east coast of the United States

The Soviet government initially tried to hush up the explosion and resisted immediately evacuating nearby residents. It also failed to tell the public what happened or instruct people and cleanup workers how to protect against radiation, which significantly increased the health damage from the disaster.

A shelter called the “sarcophagus” was hastily erected over the damaged reactor, but it has been crumbling and leaking radiation and recent years and a new confinement is necessary.

In Moscow, activists gathered outside the headquarters of Rosatom, Russia’s state nuclear corporation, demanding that dangerous high-power reactor experiments at Murmansk’s Kola Nuclear Power Plant (NPP) cease, and that Chernobyl-style RBMK  1000 reactors, 11 of which still function in Russia, be taken off the grid.

This too was the call of the local Murmansk activist organization Nature and Youth (Priroda I Molodezh), which gathered on a central square in that city to demand a cease to lifespan extensions for the aged reactors at Kola NPP and the planned power-boosting experiment at Kola’s No. 4 reactor. Engineers plan to run the reactor at 107 percent its design capacity.

Those picketing Rosatom came from a broad spectrum of environmental groups large and small, as well as from the opposition political party Yabloko, and it’s  Green Russia faction. 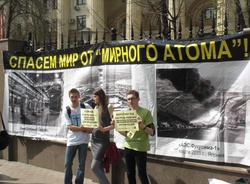 Sergei Mitrokhin, a leader of the Yabloko opposition party called the power-boosting plan senseless and corrupt. He said that new reactor builds “must be stopped: it is nothing but theft of the Russian budget.”

With two workers direcltly killed by the blast, vastly conflicting numbers suggest a far greater death toll in the days, months and years following the explosion – a toll that will continue to grow.

Alexei Yablokov, one of Russia’s most esteemed environmentalists, an expert on Chenobyl’s aftermath, and head of the Green Russia party, told demonstrators of independent analyses of Chernobyl’s consequences that differ sharply from official reports. He said that Chernobyl’s wake included and continues to include “millions of deaths and cancers, early aging, endocrine system disorders.”

A 2006 Greenpeace study suggested that that the full health consequences of the Chernobyl disaster could top a quarter of a million cancer cases and nearly 100,000 fatal cancers.

Last year, the Washington-based the Union of Concerned Scientists suggested that the number of excess cancer deaths due to radiation from the accident will be near 25,000 – six times higher than the 4,000 deaths cited by the UN sponsored Chernobyl forum. The International Agency for Research on Cancer estimates 16,000 cancer deaths in Europe through 2065 due to Chernobyl.

Ukraine’s Yanukovych, in his own speech Thursday, said that 2 million people, including cleanup workers and children, have been hurt by the tragedy and it was the state’s obligation to protect and treat them.

Demonstrators pass the mic and vent ire against Rosatom

Activists gathered in Moscow unfurled banners reading “Save the world from the peaceful atom,” and passed out leaflets pointing out that the design of the RMBK 1000 reactor is fatally flawed and that the cause of the accident was due to an experiment to see how the plant would operate if it lost power.

The leaflets noted that “Rosatom continues to behave as if Chernobyl or Fukushima never took place. This irresponsible policy is dangerous and can lead to new accidents.”

Bellona’s Andrei Ozharovsky, a nuclear physicist, told picketers that “Rosatom has not learned the lessons of Chernobyl.”

He noted that Leningrad NPP, Kursk NPP, and Smolensnk NPP all continued to operate RBMK-1000 reactors, and that despite recent efforts to improve their design, they “must be stopped as soon as possible to avoid a repeat of the Chernobyl scenario.”

“Russia should stop financing Rosatom and the funds should be put toward the use of environmentally clean renewable energy sources such as wind, solar and tidal power,” said Yaroslav Nikitenko, of Russia’s Habitat (Sreda Obitanie) group. “Our country is lagging behind in this first of all because huge government funding is spent on supporting the nuclear industry.”

Moscow protesters sent and appeal to the Russian government to “stop believing the fairy tales about the benefits of nuclear energy and adopt a gradual program systematically decreasing Russia’s dependence on nuclear power.”

In Murmansk, Nature and Youth unfurled a banner bearing the image of a nuclear matryoshka – or traditional Russian nesting doll – symbolizing the breadth of hidden problems within the atomic station and bearing the slogan “Open the Kola NPP.” Other activists dressed as doctors handed out fake iodine pills, the actual sort of which are taken during radiological emergencies. 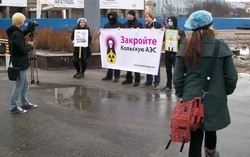 “Unfortunately, the Chernobyl tragedy has not been the only nuclear power plant accident – nuclear accidents of various levels happen around the world all the time,” said Nadya Ibragimova assistant director of Nature and Youth. “The accident at Fulushima […] is a terrible reminder of when in 1993 the Kola NPP was on the verge of a Fukushima-type disaster – the risks are too high, the Kola NPP needs to be shut.”

Ibragimova was referring to an incident in February 1993, when ice accumulation knocked out power lines feeding power to the Kola NPP, where the reactors were immediately shut down, but two out of four diesel-powered generators turned out to be faulty and could not be activated. Reactor cooling was maintained for some time via natural circulation. Fortunately, a severe accident was avoided that could have ended up in a large-scale release of radiation.

The primary cause of the March 11, 2010 triple meltdown at Fukushima was loss of coolant due to a flooding out of back up coolant units after the plant was hit by a tsunami.

Nature and Youth said that reactor Nos 1 and 2 at the Kola plant lack containments – as Fukushima did not –and have already for many years not adhered to contemporary safety standards. Reactors such as these have been shut down in the European Union. Decommissioning plans for the Kola nuclear power plant do not yet exist.

“With this demonstration we wanted to recognize the memory of the victims of the Chernobyl accident, as well as remind people that incidents occur at nuclear power plants every year and Kola NPP is no exception,” said Nature and Youth activist Tatyana Kylbakina.

An internet campaign to collect signatures in favor of closing the Kola NPP has been launched at www.stopKolaNPP.com. The petitions will be sent to the Russian President and Prime Minister in Russian, Norwegian and English.

A signature drive was aslo underway in the Nizhny Novgorod region where protestors signed an open letter to the region’s governoer, Valery Shantsev, appealing that he not allow the construction of a nuclear power plant on a geographically unstable site that has been selected for the purpose. The waved banners reading “Remember Chernobyl.” 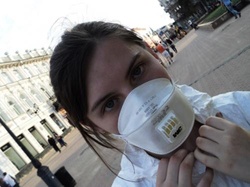 “Chernobyl still evokes pain and is remembered today,” Yanukovych said. The new cover for the destroyed reactor and storage for the spent nuclear fuel is estimated to cost some €740 million, financed largely by donors.

Vince Novak, Director of the Nuclear Safety Department with the European Bank for Reconstruction and Development said, “It is definitely important for the bank and for the donors to know that there is a strong commitment in Ukraine to do everything necessary to ensure that the Chernobyl project progresses well,” Novak told the Associated Press.

“We have no room and margins for delay, for errors and for poor performance,” he said.

Preparatory work has been under way since 2008 and included cleaning up the assembly site, replacing contaminated soil with new earth and then putting it in concrete, which now enables employees to work without special radiation protection.