A fire broke out on Sunday at a Moscow nuclear research center that houses a non-operational 60-year-old atomic reactor, emergency officials reported as Russia’s nuclear agency Rosatom said the blaze had not been accompanied by any open flames and posed no threat of a radiation leak.

Published on February 5, 2012 by Charles Digges 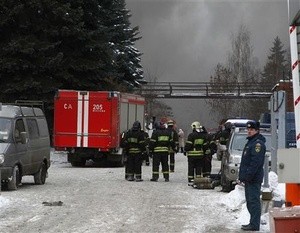 There were conflicting reports late Sunday afternoon over whether the fire was in fact out, and the Alikhanov Institute of Theoretical and Experimental Physics in southwestern Moscow refused to take calls, making it impossible to determine whether any nuclear fuel or other radioactive materials were impacted by the blaze.

While the cause remains undetermined, the fire broke out early on Sunday in a part of the institute in southwestern Moscow that contains a research collider, institute officials said in a statement on its website (in Russian).

There were no radiation sources in the area of the collider, which had been shut off on December 25th, and there was no danger of a radiation leak, the statement said. It also said personnel were evacuated and nobody was hurt.

Sergei Vlasov, a spokesman for the Moscow branch of the Emergency Services ministry, told Reuters the fire had been confined to the basement and confirmed that no casualties had been reported.

The institute houses the Soviet Union’s first heavy water reactor, designed in the late 1940s as part of dictator Josef Stalin’s programme to develop nuclear arms, according to the institutes website.

Sergei Novikov, a spokesman for Rosatom, was quick to say that no fissile materials had been endangered by the fire, and that the blaze has been localized to an area consisting mostly of cables that posed no risk to any nuclear materials on site.

But Rosatom, too, remained mum about whether any nuclear or radioactive materials remained in the six-decade old heavy water reactor, though they said the reactor is non-operational.

Bellona says such fires should not occur

“This is the kind of thing that should not be happening,” said Bøhmer Sunday. “It just proves that Russia’s aging nuclear infrastructure is prone to fires.”

Grey smoke was reported by witnesses to be rising above the institute, which is encircled by a wall as bitter smell filled the air, Reuters reported.

Some 30 emergency vehicles, including fire trucks and ambulances, stood inside and outside the main gate of the institute, witnesses told the news agency.

The incident is the latest in a series of recent fires at Russian nuclear installations, including a blaze in December that engulfed the Yekaterinburg Delta Class IV nuclear submarine while it was in dry-dock near Murmansl for repairs, injuring nine and causing extensive damage.

Though there was no radiation leakage from the sub fire – which may have had weapons onboard at the time – the Ministry of Defense issued several statements that later proved to be untrue.

Similar to the case of the fire that may or may not be ongoing at Institute of Theoretical and Experimental Physics – named for Abram Alikhanov, one of the developers of the Soviet A-bomb – the Defense Ministry issued conflicting reports on whether or not the sub fire had been extinguished, as well as its cause. The Defense Ministry had said the fire had started after welding works went awry on a wooden scaffolding around the sub. It later turned out the scaffolding was made of metal.

The Ministry also reported that the duration of the fire – whose smoke was visible 10 kilometers away – was due to the long buring of the sub’s rubber outer hull. Photographs later revealed that the fire had been largely fueled by the subs hyro-accoustic chamber, still a part of the outter hull, but an area containing antenna’s with long burning oils, oil saturated water and air pumps that fanned the flames.

Finally, the Ministry said the sub did not have weapons on board. This could not be indepentently verified, but after the fire was extinguished, the Yekaterinburg was sent from the dry dock base in Ruslyakovo to Okolnaya, a base equipped with the necessary equipment to remove missiles or test missiles. The Defense Ministry denied nuclear weapons had been on board.

Rosatom’s Novikov said of the fire at the institute located in a heavily populated district of Moscow that: “This case poses no threat to fissile materials.”

He said that firefighters were pumping foam into the affected area, and that the institute’s heavy-water research reactor was no longer operational, the Reuters report said. The nuclear research institute is one of dozens within the city limits of Moscow – a city of 11 million – people, that sprung up with little consideration, and indeed knowledge, of how radiation affected humans or how radioactive materials should be disposed of during the Cold War.

“This fire reflects that there is a low safety culture surrounding fires in Russia’s nuclear industry,” said Bøhmer. “This is a huge concern for potential radioactive releases from numerous facilities across Russia.”

The fire at the Alikhanov institute is especially delicate given that it represents a large amount of radioactive substance right in the centre of Moscow. Even minor leaks would pose serious problems noted,” Bøhmer.

Conflicts over whether fire is out

Russian news agencies issued conflicting reports on whether the fire was indeed out.

Interfax cited a police source as saying fire brigades were denied access to the facility for “a long time” before being allowed in.

Vlasov told Reuters he could not confirm that report, but said the fire had not been extinguished as of 2:45 p.m.local time.

State-run RIA reported earlier that that the fire had already been put out.

Russia’s nuclear industry has been a subject of worldwide scrutiny since the Chernobyl disaster of 1986, in current day Ukraine, which Soviet authorities denied for two days.

But the culture of denial begins well before that with a 1957 explosion at the location of Russia’s Mayak Chemical Combine, which reprocessed nuclear fuel. The incident was termed the Kyshtym disaster to deflect blame for the toxic radiological explosion in spent nuclear fuel storage tank to a neighboring industrial town.

Hundreds and thousands were relocated from the Mayak area near Chelyabinsk in the southern Urals, but evacuation efforts for the highly irradiated region continue in fits and starts.

Russia has since suffered several accidents which observers say were the result of negligence and corruption, problems that have hindered modernisation of the civilian and military infrastructure. The sinking of the Kursk nuclear submarine in 2000 during training exercises, which killed all 118 sailors aboard is but one example.

The sub sank after a torpedo exploded, but Russia turned away foreign help to rescue those who survived the initial blast for a week out of security considerations. All crew were found dead when a Norwegian diving crew finally opened an escape hatch.

The fire at the Alikhanov Institute took place over an especially heavy weekend of thousands-strong protests against the results of last December’s allegedly rigged Parliamentary elections in which Prime Minister Vladimir Putin’s party United Russia slid heavily in polls but managed to maintain a hold on the legislative body.