Hungarian manufacturer could be behind mysterious radioactive leak blanketing Europe

The International Atomic Energy Agency believes the source of low levels of radioactive Iodine detected by radiation safety agencies in the Czech Republic, Austria, Sweden, and other European countries over the past few weeks was “most probably” an isotope maker in Budapest, Hungary, the UN nuclear body said on Thursday.

Published on November 18, 2011 by Charles Digges 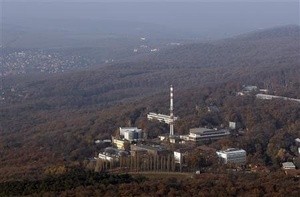 But the Hungarian Atomic Energy Authority  (HAEA) and the isotope manufacturer itself were extremely cautious in making any definitive statements.

The HAEA told the IAEA in a letter that acknowledged the confusion of the situation that Iodine-131 may have been released from the Institute of Isotopes, also known as Izotop Intezet, from September 8 to November 16. But there is some controversy surrounding the HAEA announcement, according to the Hungarian agency’s officials.

“The cause of the [Iodine] release is under investigation,” the Vienna-based International Atomic Energy Agency said in a statement late Thursday.

“The levels of Iodine-131 that have been detected in Europe are extremely low. There is no health concern to the population,” the IAEA statement continued.

The Institute of Isotopes in Budapest manufactures Iodine for purposes of healthcare, research and industry. Iodine, in low doses, is used to treat thyroid issues.

But Iodine-131, linked to cancer if found in high doses, can contaminate products such as milk and vegetables.

The IAEA said that Iodine-131, which has a decay half-life of just eight days, had been detected in at least seven countries – Austria, Slovakia, Hungary, Germany, Sweden, France and Poland.

A spokesman for the IAEA told European news outlets that the agency had conducted air dispersion modeling with the World Meteorological Organization and those findings pointed to Hungary.

But officials with the Budapest-based Institute of Isotopes say that their organization is most likely not responsible for the emissions of the iodine.

Mihaly Lakatos, a highly ranking official at the institute said that while a filtering problem at his organization may be responsible for some of the iodine-131 detected in Hungary, it could not be the source of detections hundreds of kilometres away in other European nations.

“The amounts of iodine-131 measured in neighboring countries cannot have much to do with this, because the distances involved rule out that the amount we emit could be registered over there,” Lakatos told Reuters.

Jozsef Kornyei, director of the Institute of Isotopes, also told the Associated Press that it was “extremely unlikely” that the leak at the Budapest plant was the cause of trace levels of Iodine-131 measured in several European countries, based on weather factors.

Kornyei said that the firm first noticed the heightened release of iodine-131 during the first half of 2011.

Production restarted in September after new filters were installed, but the release of radioactive material stayed above normal levels, so the process was halted again this month.

Kornyei told the news agency that new ventilators were being added at the plant in an effort to limit the excessive release of the radioactive material and that production of Iodine-131 would not be restarted until next year.

A letter sent Thursday to the IAEA by the HAEA said the cause of the higher radioactivity was under investigation, albeit hampered by administrative difficulties, AP reported.

“Unfortunately, in Hungary the licensing and surveillance of the nuclear facilities and the laboratories using high amounts of radioisotopes are in the hands of different authorities,” the Hungarian nuclear watchdog said in its letter to the IAEA.

“The communication problems we faced in the present situation call our government’s attention for an improvement and simplification of our regulatory system,” it said, according to AP.

HAEA head Jozsef Ronaky said that it was too early for the IAEA to draw firm conclusions that the Institute for Isotopes was alone responsible for the iodine emissions, but that the institute was probably to blame.

“It cannot be ruled out (that the institute was the source). I consider the opinion of the laboratory premature,” Ronaky told Reuters. “Establishing whether the substance detected in other countries was emitted by them requires a thorough investigation.”

Ronaky said the IAEA had no oversight over the Institute of Isotopes, but that the company is the point of contact for the IAEA within Hungary. He further conceded that on the basis of the data submitted by the institute to the IAEA that Institute for Isotopes was likely the source of the iodine.

Budapest’s envoy to the IAEA also said earlier he could not rule out that the lab was the source, according to Reuters.

The IAEA said in its statement that if a person were to breathe in the levels for a whole year, they would receive an annual radiation dose of less than 0.1 microsieverts.

In comparison, average annual background radiation is 2,400 microsieverts a year, it said.