A Russian nuclear submarine in which 20 people died during a 2008 sea trial will be leased to India in mid-November, a source in the Russian defense industry told the RIA Novosti news agency, ending speculation on whether the fateful vessel would be passed on.

Published on October 4, 2011 by Charles Digges 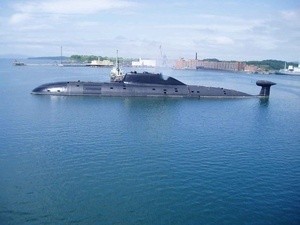 The Nerpa, built by the far eastern Amur Shipyard, was to have been leased in 2008, RIA Novosti news agency reported, but the transfer was put on hold following a fatal accident three years ago when a Freon gas fire suppressant system was accidentally set off.3

Seventeen of the dead were civilians, killed when fire-suppressant Freon gas was released during sea trials in the Sea of Japan in November 2008.

Another 21 people were injured in what was Russia’s worst naval accident since the sinking of the Kursk nuclear submarine in 2000.

The Nerpa was undergoing sea trials and had 208 people aboard, nearly three times its normal complement.

The industry source told RIA Novosti all the defects “will have been eliminated before November, after which the Nerpa will be transferred to Delhi.”

Late last month, a jury dropped negligence charges against the Nerpa’s captain, Dmitry Lavrentyev, and engineer Dmitry Grobov, who were charged with professional negligence resulting in death or injury for allegedly setting off the sub’s fire safety system “without authorization and for no reason.”

Prosecutors have vowed to appeal the decision.

The cause of the accident however, cannot be linked to two specific individuals, said Bellona’s Alexander Nikitin, a former submarine captain in the Russian Navy, when commenting on the accident when it occurred.

The age of the ship and the competence of both the naval and shipyard crew that were aboard the Nerpa when the deadly accident occurred must be taken into account, he said. Experience among the crew of those who built the Nerpa, said Nikitin, was especially low.

Workers at the Amur Shipyard said in an open letter in the same month that Lavrentyev and Grobov were “scapegoats” and that the disaster was the result of “corruption and disintegration of the military-industrial sector.”

Freon – a powerful anti-oxidant to extinguish fires in the closed and sealed quarters of a submarine – was released in the submarine’s bow compartment, which was being used as bunk space to accommodate the civilians on board and asphyxiated those who perished.

By sucking the oxygen out of the air, fires are extinguished. But the consequences are lethal if crew members are not alerted beforehand to don their personal breathing apparatus, or run for the nearest stationary breathing post with which submarines are equipped.

Survivors of the Freon dump said in the Russian media after the they were caught completely unaware during the November 2008 accident as an alarm signal is supposed to sound before a fire extinguishing operation.

According to two accounts in separate Russian newspapers, the alarm system was triggered after the fire suppression system was activated. When the alarm did sound, a second dump of Freon followed.

Nikitin, who heads Bellona’s St. Petersburg office, chalked up the accident with the fire suppressing system to the sheer number of people aboard the submarine during its fatal sea trial. The crew of a standard Akula class submarine numbers 73.

Nikitin said this was standard practice, as a crew from the shipyard that built the boat will be onboard during sea trials with the naval crew that will be putting the boat to sea for active duty.

But the Amur Shipyard had not built a submarine in more than a decade. Therefore, according to Nikitin, a brain-drain had occurred among the shipbuilders as less experienced shipyard crew members – many of whom had never been to sea before – were aboard when the accident occurred.

The last submarine to have been under construction at the Amur Shipyard was, in fact, the Nerpa. But construction was halted when funding ran out, and 15 years of sitting in dry dock did nothing positive for the condition of the vessel.

A former senior medical officer with the Pacific Fleet alleged in May the Nerpa’s firefighting system contained a “lethal” mixture of Freon and trichloroethylene – a commonly used industrial solvent which is highly toxic and corrosive – rather than pure Freon.

The $650 million lease contract for the Nerpa was signed in 2004. The delivery of the Nerpa will make India the sixth nation to operate nuclear-powered submarines, after France, China, Russia, the United Kingdom and the United States.