Russia’s floating nuclear power plant is an environmental time bomb, and production costs are going to be sky high, said Igor Kudrik, a Bellona expert on the Russian nuclear industry. 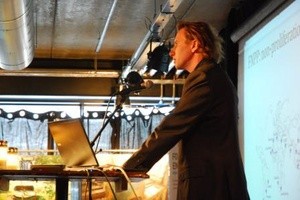 “Russia’s plans for floating nuclear power plant represent enormous environmental and safety hazards, and the current from will be disastrously expensive, “said Kudrik.

Marking exactly 25 years since the Chernobyl accident, Bellona organized today a nuclear seminar where the organization’s new report was presented. 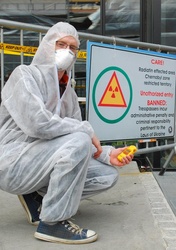 “The world’s first floating nuclear power plant is now being built in St. Petersburg, and will be completed in 2012. It is scheduled to become operational in the earthquake-prone Kamchatka Peninsula in the Far East of Russia.

Kamchatka is located near Japan, which since 11 March has fought for his life against the tsunami- and earthquake- triggered nuclear crisis at the Fukushima Daiichi nuclear power plant.

“The risk of serious accidents with severe consequences is always present at nuclear power plants. They are not exactly small when you set them to sea – and this in areas of high volcanic activity,” said Kudrik.

Floating plants helpless in an accident

Kudrik added that the plan is to use the floating nuclear power plants in remote areas with little electricity and infrastructure.

This is in and of itself a risk because there is no infrastructure that would make it easier to implement effective countermeasures in case of accidents.

The report also says that Russia has ambitious plans to sell its new floating power plants to countries in Asia, Africa and Latin America, increasing the danger that nuclear technology could fall into hostile hands, said Kudrik.

“Some of the states we are talking about is relatively stable politically. Others are more worrying in this respect,” he said.

According to the Russian state nuclear corporation Rosatom countries such as Tunisia, Morocco, Senegal, Namibia, India, China, Indonesia, Chile, Brazil and others are on the list of interested potential customers.

“Anyone who is concerned about non-proliferation, should be skeptical of the Russians’ plans,” said Kudrik.

Plans should be shelved

The report, written by Bellona’s Alexander Nikitin and Leonid Andreev, also contains information that gives reason to question why Russia would go ahead with the project at all. Each megawatt of installed production at these plants will cost $7.8 million.

For comparison, the same figure at the Olkiluoto nuclear power plant in Finland is $3.3 million.

“The economic of the project are simply miserable. There is not one single good reason to go ahead with this fluent madness, “said Kudrik.

The English version of the report can be downloaded to the right.