NEW YORK – American military officials on Monday gave their Russian colleagues classified documents concerning the fate of the Soviet K-129 nuclear missile submarine that sunk under mysterious circumstances in the Pacific and is one of the lingering mysteries of the Cold War.

Published on September 11, 2007 by Charles Digges

Even today, the secrecy surrounding the American quest to put their hands on the Soviet era nuclear technology remain the stuff of cloak and dagger documentaries, and the vessel itself a museum piece in American and Russian Cold War collective memory.

At a ceremony in the Far Eastern port of Vladivostok, Russia’s Pacific Fleet archive and museum received copies of documents formerly classified by the United States, including two ship logs related to the K-129 incident and to US efforts to salvage the sub from the sea floor in the central Pacific, Russia’s NTV television reported Monday.

Whether the Americans were able to recover the submarine’s military logs and secret codes is still a mystery, the channel reported.

But the Americans turned over a videotape of a secret burial at sea for six Soviet sailors whose bodies were recovered when the United States tried to salvage the K-129 in 1974 with the help of the CIA’s deep-sea salvage vessel, the Glomar Explorer. 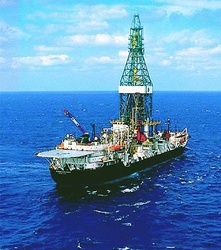 Collision or accidental explosion – mystery remains
Russian officials have long suspected that the submarine – which sank in 16,000 feet of water with 98 crewmen aboard northwest of the Hawaiian Islands on March 11th, 1968 – was struck by an American submarine, the USS Swordfish. The K-129 was a Golf-II diesel-electric submarine carrying nuclear missiles.

The US Navy says the K-129 sank after it suffered a catastrophic internal explosion. It remains unclear whether the ceremony helped clear up any lingering doubts, NTV reported.

Speaking in the broadcast, US Lieutenant Colonel Michael O’Hara said: "We have a debt to servicemen. If I were to go missing, I would want someone to work — like what I am doing — to communicate to my mother and father what exactly happened with me."

O’Hara works with the U.S.-Russian Joint Commission on prisoners of war and soldiers who went missing in action to help account for military personnel who disappeared during the Cold War. The commission was created 15 years ago following the dissolution of the Soviet Union.

Roger Schumacher, the Washington-based deputy director supporting the commission, said much of the material donated Monday had been handed over previously to Russian defense, government or intelligence experts, the Associated Press reported.

Other items related to the K-129 sinking that were turned over earlier, according to Schumacher, included the sub’s bell and a camera apparently used by a sailor on the vessel.

US underwater photographs of the sunken sub have not been given to the Russians, despite repeated requests, NTV reported.

"There is just one version — that (K-129) collided with an American submarine," he said in televised comments.

Kursk sinking caused doubts to resurface
Russian doubts about the US explanation re-emerged in 2000 with the sinking of the nuclear submarine Kursk during a large naval exercise in the Barents Sea that killed all 108 sailors on board. Russian military officials suspected the Kursk collided with an American or British submarine, but seismic date collected as far away as England indicated that an on-board explosion –later revealed to have occurred in the sub’s torpedo compartment – was to blame.

US and British officials denied the collision allegations, but US officials acknowledged that two U.S. submarines that were shadowing the Russian naval exercise and were close enough to record the sound of enormous explosions aboard the Kursk.

Russian suspicions about the Swordfish colliding with the K-128 in 1968 were based on records indicating the Swordfish underwent nighttime repair of a bent periscope at Yokosuka, Japan, on March 17th — six days after the K-129 sank — and Moscow has requested the Swordfish’s deck logs to trace its movements. The Pentagon has explained the repairs in Japan by saying the vessel had collided with an ice pack and was 2,000 miles away from the Soviet sub when it sank.

The repair of the Swordfish, though, bears parallels to Russian satellite photographs of an American Los Angeles submarine that apparently put in to a Norwegian port for repairs from a collision. That report was never confirmed, and denied by the Americans.

Russian officials also say he U.S. salvage operations in 1968 and 1974 removed sensitive equipment — possibly including nuclear warheads. In the 1974 efforts, the CIA-financed Glomar Explorer salvage ship tried raising the sub, but it broke apart and only some sections were recovered.