Two sailors were killed and another injured aboard a Royal Navy nuclear attack submarine Wednesday after an explosion during the use of a back-up ventilation system, an administrative official with the Ministry of Defence (MOD) told Bellona Web Thursday. 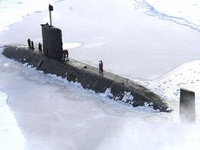 According to a statement release by the British MOD, the nuclear reactor of the HMS Tireless was not affected and there was only minimal damage to the bow section of the vessel, where the explosion took place.

The HMS Tireless, which is a so-called attack and kill sub, carries no nuclear missiles. The accident took place while the HMS Tireless was on exercises with the US Navy under the polar ice cap.

"The submarine, HMS Tireless, was never in any danger, its nuclear reactor was unaffected, it quickly surfaced and is completely safe," said the MOD statement, which was posted late Wednesday.

"The ships company dealt with the incident quickly and professionally and, as a result, there is only superficial damage to the forward compartment,” read the Royal Navy statement.

One sailor was killed outright by the explosion and the other died from smoke and fume inhalation, the MOD official, who asked that his name not be used, said. The injured sailor was evacuated to a hospital in Anchorage, Alaska when the HMS Tireless surfaced through the ice. He was treated for smoke inhalation and release Thursday.

The Royal Navy has not released the names of any of the sailors involved, but reported in an MOD statement that the families of the dead sailors had been notified.

Causes of explosion unknown
It is unclear what caused the explosion, the MOD official said. The accident occurred while sailors were operating a self-contained oxygen generator – known as an “oxygen candle” among submariners – which is a stand-by method of producing breathable air even when a submarine’s power goes out.

But the MOD official said it was unclear why the sailors were using it, and it was equally mysterious as to why it triggered the small explosion.

“It could be that they were training on it or that they actually needed it,” said the MOD official.

“That’s why the whole incident is under investigation.”

He said he could not speculate on possible causes for the explosion.

The HMS Tireless is one of the Royal Navy’s seven Trafalger class submarines, which carry Tomahawk missiles.

According to the MOD official, all Trafalger subs carry oxygen candles, but their use has been suspended until the investigation in to the explosion is complete.

A history of mishaps
The HMS Tireless has over the past seven years been dogged by a series of accidents, but none have involved injury or death. This most recent acident marks the third since 200o, according to information on the MOD website.

In 2000, it was stuck in Gibralter for several months worth of repairs because it had run aground. Then, in 2003, it was again in the shop for repairs after it collided with what the British navy classified as a “free floating object” while on patrol in the Arctic.

The HMS Tireless was commissioned in 1984 and is based at Devonport in Plymouth, England.