Published on September 6, 2006 by Charles Digges

The fire occurred Wednesday night at 8:45 p.m. local time on the 671 RTM Victor-III class submarine K-414, “Svyatoi Daniil Moskovsky,” and was extinguished by midnight, the Interfax Russian news agency reported. The Northern Fleet submarine, which was on routine patrol in Russia’s northern and Arctic waters, was anchored off the North of the Rybachiy peninsula, one of continental Russia’s most northerly points, near the Norwegian border, when the blaze broke out, killing two and injuring one.

The sailors who perished were warrant office R. Shabanov,35, and seaman I. Etyuyev, 28. Russian naval officials supplied only the first initials of the dead crewmembers.

Other Russian naval vessels in the area were sent to the K-414’s aid. After the fire was extinguished, the two dead sailors and the one injured seaman – who has not been named by naval officials – were delivered to a naval hospital. Shabanov and Etyuyev will undergo routine autopsies, Interfax said.

Russian Navy’s Commander Admiral Vladimir Masorin, in remarks reported on Rossiya Television’s Vesti news programme, was perplexed that the sailors had not used the portable emergency breathing devices that are apparently standard emergency issue for submariners. He speculated that they had simply not had time to put them on. He was also quick to point out that the K-414 was long overdue for maintenance checks.

Funding pomp and circumstance instead of safety
"The Russian Navy and the Northern Fleet in particular are furnished for parading themselves in front of Russian President Vladimir Putin, but underneath, there is still a dilapidated infrastructure," said Igor Kudrik, Bellona’s chief submarine expert.

"Old submarines don’t get sufficient repairs, and there is a lack of funding for everything – except for the parades."

The K-414 was graved at the Admiralteisky shipyards in St Petersburg in 1988, and put to sea in 1990. In 1994, together with the ballistic missile submarine K-18, it reached the North Pole. 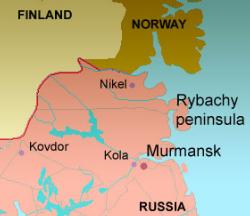 According to the official website of the Russian Military Prosecutors’ Office, a criminal investigation into the fire aboard the K-414 has already begun. An investigative team was dispatched to Vidyayevo to meet the submarine when it arrived Thursday.

Masorin blames electrical system and maintenance snafus
Indeed, Admiral Masorin said the K-414 had not undergone routine maintenance in some time, Interfax reported, though some running repairs had taken place. The sub had experience a fire in its torpedo compartment in 1994. But the poor approach to regular repairs in general is especially dangerous, said Kudrik, as the Russian Navy has recenlty stepped up the number of exercises and sorties it performs, the expenses for which are diverted from maintenance.

"There is enough financing for these undertakings, but the infrastructure and the ship maintenance is under funded. Such incidents may persist if the combination of frequent sorties and inadequate repair and maintenance work continues," Kudrik said.

In Masorin’s view, such incidents have already begun. In his remarks reported on Vesti, Masorin said: "It seems likely our equipment has let us down again. This boat is 16 years old and it is overdue for an overhaul."

A history of fatal accidents
Russia’s Northern Fleet has been dogged by accidents in recent years. The worst was the sinking of the Kursk on August 12th 2000, killing all 118 crewmembers on board. It was determined that a torpedo accident during a test launch from the vessel, which was on a naval exercise in the Barents Sea, was the cause of the explosion that sank it.

Though no radiation contamination was detected, the gnarled wreckage of the submarine was raised from its watery grave of 108 metres in 2001. It was also apparent that several of the crewmembers had survived the initial blast, but died because of delays and incompetence among Russian rescue teams. A Norwegian diving team, which had been offering assistance for a week, was finally invited to open the sub’s escape hatch.

Then, in August 2003, the derelict nuclear submarine K-159 sank while being towed for decommissioning, killing nine of the 10 crewmembers on board, and taking 800 kilograms of spent uranium fuel to the ocean floor.

The rickety sub was held afloat by rusty pontoons and was riddled with leaks of its own. The pontoons broke loose and the towline snapped when the vessel and its tug boat ran into heavy weather.

The K-159 sank in 240 metres of water. Several plans were tabled to raise the vessel, but the Russian government cannot afford the estimated EUR 50m project.

In July 2006, another Victor-III class submarine, the K-448 “Tambov,” based at Vidayevo, suffered a leak in its first reactor circuit.