Member of European Parliament wants the IAEA off the Chernobyl subject

KIEV—Member of European Parliament (MEP) Rebecca Harms of the Group of Greens and the European Free Alliance wants the United Nations nuclear watchdog—the International Atomic Energy Agency (IAEA)—off the subject of Chernobyl for what she called bias. 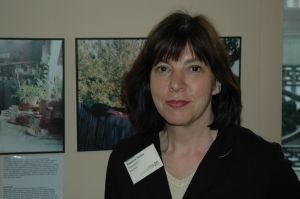 Harms, who is taking part in the“Chernobyl+20” NGO conference in Kiev, Ukraine, has slammed the IAEA for its recent statements that considerably diminish the effects of the Chernobyl disaster’s consequences.

“I really hope that in my job, as a member of the European Parliament, is to develop enough pressure on the European Commission so that they are forced to make sure that the IAEA does not continue as a responsible board for science on Chernobyl consequences," said Rebecca Harms in an interview with Bellona Web.

"They are not independent—they are working in favour of or close to nuclear industry. Their job is from the very beginning to spread nuclear power all around the world. So they are in favour of nuclear power, and that has strange results—they made falsifications in the WHO World Health Organisation studies concerning Chernobyl’s consequences.”

Alexander Nikitin, head of Bellona’s Russian operations, who took part in the protest, also said that the role of the IAEA should be revised. 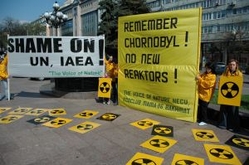 “A lot of people in the IAEA are inventing norms, which in fact lead to development of the nuclear industry and to further nuclear problems. I have a feeling that they are authorised to do many things, but have a way too little output,” said Nikitin in an interview with Bellona Web. “For what happened in the North Korea and Iran, the IAEA should be dismissed as an institute.”

Rebecca Harms, who also participated in the protest, said the European Commission (EC) should be responsible for leveling consequences against the IAEA.

“I hope that during these days in Kiev we can create enough pressure on decision makers in Europe so that we’re able during the next month to set up independent scientific studies to work on Chernobyl effects,” said Harms.