A fire aboard a scrapped nuclear powered submarine that was undergoing dismantlement operations at the Severodvinsk shipyard Zvyozdochka has left two young workers dead.

Published on August 1, 2005 by Vladislav Nikifоrov 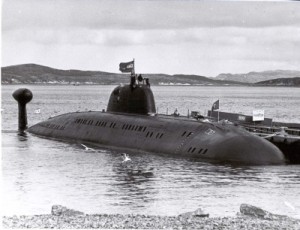 The massive fire occurred during cutting operations in the third compartment of a Victor-III submarine, which had been stripped of its nuclear fuel and reactors and was being dismantled for scrap metal, military and shipyard officials said.


The fire took place at around 8:32 am (04:32 GMT) and was extinguished around 9 a.m., said the duty officer for the Emergency Situations Ministry in the White Sea region of Arkhangelsk, some 960 kilometers north-east of Moscow. An 18-year-old worker died on the spot and another, 22, was taken to hospital with severe burns. He died early Tuesday morning.


Igor Grigoryev, a spokesman for the Emergency Situations Ministry in the region, said a welding torch apparently ignited fuel vapour that had built up in one compartment of the submarine, according to the Associated Press. The submarine has fuel tanks, the content of which must be removed before scrapping operations commence.


The incident occurred on a sub that is being dismantled on funds provided by Canada under the Global Partnership programme adopted at a Group of Eight summit in 2002. The submarine had been at Zvyozdochka since June and the nuclear fuel had already been removed before the vessel was put into dock.


Victor-class submarines, put into service by the Soviet Union around 1967, were designed mainly to attack enemy ballistic-missile submarines and to protect convoys of Soviet surface ships. In the USSR they were produced under Project 671 and featured a teardrop shape, which allowed them to travel at high speed. When the Soviet Union discovered through its intelligence network that Americans could easily track Victor II-class subs, the quieter Victor III submarine was designed.