In the first high-level disciplinary action in the aftermath of the K-159 disaster, Vladimir Putin has removed Admiral Gennady Suchkov, head of Russias Northern Fleet, from service after what the Russian Navys Chief of Staff Vladimir Kuroyedov called a series of preventable mistakes.

Published on September 12, 2003 by Charles Digges 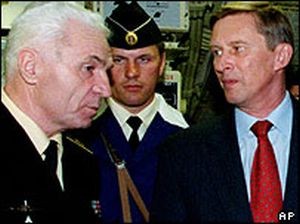 The 40-year-old K-159, a rusted hulk of a vessel, sank in 238 metres of water during the early morning hours of August 30th while it was being towed from the Gremikha naval base in the Murmansk region to a Kola Peninsula shipyard for dismantlement. The sinking killed nine of 10 crew members aboard the towed vessel, and brought 800 kilograms of spent nuclear fuel—with a radioactivity level of 750 curies per kilogram—to the bottom of the Barents Sea.

It is as yet unclear how long Suchkovs suspension will last. According to Kuroyedov, who announced the suspension on NTV Russian television Thursday, the suspension is temporary and will last as long as it takes Military Prosecutor General Alexander Savenkov to investigate the case. Suchkov had replaced Admiral Vyacheslav Popov, who had been fired after another submarine, the Kursk, had sunk in the Barents Sea on August 12th 2000 with its entire 118-man crew. The Oscar II class Kursk, on a training mission, sank after a series of explosions in its torpedo compartment.

Sergei Zhemchuzhnov, the chief of the submarine unit at the Gremikha naval base where the K-159 had been laid up since 1989, was suspended immediately after the accident. Gremikha officials had apparently received forecasts of heavy weather before sending the K-159 and another submarine—recently confirmed to be the K-370 Victor I class submarine, which made the journey safely—to Polyarny.

We could have prevented this tragedy if everyone in his position—from the captain of the towing operation to the fleet chief—had fulfilled all demands and instructions, Kuroyedov said Thursday in his NTV remarks, many of which seemed aimed at clearing up several contradictory statements issued by the navy and the Ministry of Defence about the time of the disaster and in what sort of weather the sub went down.

Towing Mission Disorganised From the Outset
According to Kuroyedov, the Northern Fleets headquarters was informed that the submarine had ripped loose of its stern pontoons at 1:20 a.m. August 30th. Suchkov arrived at Northern Fleet headquarters 20 minutes later, by which point, Kuroyedov said, the waves in which the derelict sub was tossing had become far rougher than towing regulations allow.

For an hour, the fleet undertook no measures to save the crew, said Kuroyedov. The men could have survived. But a decision was imperative. The boat was lost by 3 a.m.

He added that the the fleets command did not check the seaworthiness of the submarine for towing.

The towing operations organisation was also unsatisfactory, and, as a result—we have a tragedy, he said. The reason for the sinking is that those requirements that are stipulated in normative documents and technical requirements for towing were simply not fulfilled.

At present, the Russian Navy has no specific regulations for towing nuclear submarines, and only a set of general rules for vessel transportation that are not fully adhered to in any case. Bellona has, in fact, complained that Russia does not even conduct risk assessment of nuclear submarine towing operations. 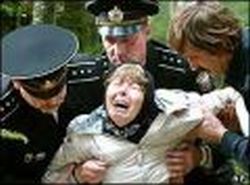 Valentina Lappa, whose husband Captain Sergei Lappa was killed in the sinking, was also aggrieved by naval negligence. She recalled on NTV that the crew had to take food and warm clothes from home, and her husband even had to buy his own pocket flashlight for the towing mission.

Just like that, without power, without anything, they headed into the cold and darkness, said Lappa.

Kuroyedov: Three Main Factors Sank the K-159
Kuroyedov cited three main failures that contributed to the accident, the first of which was the reports of forecasted heavy weather—conditions under which Northern Fleet commanders should not have cleared the submarine for towing. According to Kuroyedov, these forecasts had come 12 hours before the K-159 and the K-370 were to set sail. He said rough waters were predicted but that nobody reacted to the forecasts.

Next, Kuroyedov said the K-159s tugboat was moving faster than allowed by official instructions.

Technical documents stipulate that towing should not exceed three knots or nautical miles per hour, he said. The speed of the K-159s tugboat was 4.5 knots.

Lastly, he said commanders did not move to evacuate the crew after the violent storm ripped loose the pontoons that were keeping the K-159 afloat from the vessel, causing it to tilt to its stern.

Radiation Dangers
An independent, Bellona-commissioned test on fish in the area where the K-159 sank showed, as of Wednesday, that radiation levels, so far, were normal. Bellonas results came from fish caught some 90 kilometres northwest of the wreckage. The Norwegian Radiation Safety Authority, or NRPA, also said on Thursday that its own official samples taken in the same area had revealed that radiation levels were normal.

Both tests, however, had been taken upstream of the prevailing currents, which generally run from west to east. This means that any possible radioactive contamination may well have floated east and never reached the Norwegian sample points. But Russian nuclear officials, who have also taken samples at the site of the wreck, say their measurements, too, are normal. Bellona expects further results of its own within the next few days.

Kuroyedov said in his televised statements that the submarine posed no immediate radiation hazard, but added that there always is a danger that the radiation level could increase, according to the Russian ITAR-Tass and Interfax news agencies.

Bellona emphasises that there is no guarantee against future leakage from the reactor compartments of the vessel, which were already severely corroded before the submarine went down. They are under tremendous water pressure. They are also cold because no heat-generating nuclear reaction had taken place within them since 1989. Without a substantial level of heat, the reactors have no more internal pressure to resist the pressure from outside. The risk is that the seawater may crush into the reactor cores and wash radiation out into the sea.

This differs from the reactors aboard the Kursk. The Kursks reactors, because they were hot and thus with built up internal pressure, posed relatively little risk of radiation leakage before they were salvaged from a comparatively shallow depth of 108 meters.

Kuroyedov Says the K-159 Will Be Raised
Kuroyedov speculated that salvage operations to lift the K-159 would begin in August 2004.

I think we must raise the submarine. I will insist on this, said Admiral Kuroyedov. We must not leave a nuclear object on the seabed.

The Kursks hull was partially lifted with the help of a Dutch consortium one year after the sinking for an estimated cost of $65m. It is as yet unclear whether the Russian authorities will enlist foreign help for lifting the K-159.

Kuroyedov Again Lands on His Feet
Following the public relations disaster in the wake of the Kursk sinking, the Russian Navy has acted publicly and swiftly in the case of the K-159. This showed, for instance, in the navys brass gathering relatives of the victims at the Northern Fleets headquarters at Severomorsk for meetings with Minister of Defence Sergei Ivanov immediately after the sinking. Ivanov also prompted the Military Prosecutor Generals office to open an investigation the same day.

But questions left unanswered—particularly those regarding the weather the morning the K-159 sank—undermine most of the very reasons for which Kuroyedov said he had suspended Suchkov. According to Moscows Meteorological Institute, which spoke with Bellona Web earlier this week in a telephone interview, no stormy weather was recorded in the area where the K-159 sank, five kilometres northwest of Kildin Island.

The Russian daily Izvestiya, citing an anonymous source in the Military Prosecutor Generals office, also reported that weather conditions were normal on the day of the towing.

All of this about the weather being bad is nonsense, the source told Izvestiya. The weather conditions were the usual conditions for that area. The one thing the crew did wrong was not to close the conning tower hatch. It was through that hatch that water was able to get into the boat.

The source also said it was not irregular to have a crew of 10 aboard a towed submarine—something the media has been questioning since the accident.

A nuclear submarine, even one taken out of service in 1989, is not a tin can, the source told Izvestiya. Therefore, in such situations as the towing of the K-159 there are always people on the boat—a commander, a radiation expert, and even a simple boatswain with sailors who are responsible for the mooring of a huge uncontrollable object.

It is also still in question as to which shipyard the submarine was headed when it sank two days out to sea. Official reports indicated the K-159 was headed to the Polyarny shipyard on the Kola Peninsula, 350 kilometres from Gremikha. However, Russias Ministry of Atomic Energy, or Minatom, said the K-159 was bound for the Nerpa shipyard, some ten kilometres north of Polyarny. Minatom does not have oversight of the dismantlement process, but it bears the responsibility of handling decommissioned submarines spent nuclear fuel—which suggests that Minatom could have knowledge of the K-159s destination.

But Kuroyedov—who has seen the sinking of two submarines in his tenure as the Russian Navys chief of staff—has managed to evade any official accusations or reprimands.

Pavel Felgenhauer, a Moscow-based defence analyst, said in a telephone interview with Bellona Web that Suchkov was, as the Northern Fleets commander, directly responsible for the accident.
But he added that, by suspending Suchkov and Zhemchuzhnov, Kuroyedov has shoved these guys, Russian style, into cement shoes.