A Sierra class nuclear-powered submarine caught on fire Wednesday while in dry dock. 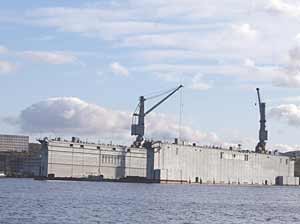 A Sierra I attack class submarine, K-336, or Pskov, suffered a fire on March 5th. The submarine was in the dry dock at Roslyakovo shipyard, situated between the city of Murmansk and Severomorsk, the home base of the Northern Fleet, on the Kola Peninsula.

Fire crews called to the shipyard managed to put the fire out in one and half hours, Russian news agency ITAR-TASS reported.

The cause of the fire is still unknown, but it may be possible that the welding works ignited the wood scaffolding surrounding the submarine. 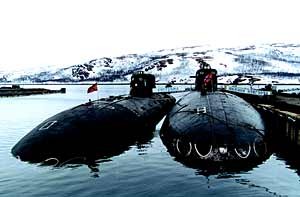 No causalities or radiation discharge are reported, although the rubber coating of the submarine is damaged.

A similar incident took place in October last year when an Echo II submarine was undergoing decommissioning at Sevmorput shipyard, located in the north of Murmansk. The fire also started on the wood scaffolding in the dry dock surrounding the submarine, and then spread to the rubber coating of the submarine.