Nearly seventeen years after the worlds worst nuclear power accident at the Chernobyl nuclear plant, some 400 British farms are still being monitored for radioactive contamination. 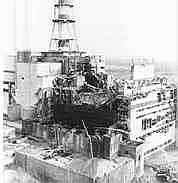 According to reports in the British press, restrictions are still in place on nearly 400 British farms after being contaminated by radioactive fallout from the Chernobyl accident. Today, nearly 223,000 British sheep are still being monitored for radioactive contamination.

Design flaws in the Chernobyl reactor most likely caused the power surge which led to the core’s meltdown. This led to chemical explosions so powerful that they blew the 1,000-tonne cover off the top of the reactor. 8 tonnes of uranium dioxide was released and spread across the surrounding countryside. Some 27kg of cancer-inducing ceasium-137 was released into the atmosphere. And an estimated 150-200 million curies — equivalent to 100 times the radioactivity released from the atomic bombs dropped on Hiroshima and Nagasaki in 1945 — was also released.

British farms still contaminated
Several days after the accident, a vast radioactive cloud drifted across parts of the UK, leaving a blanket of poisonous caesium-137 over England, Wales and the south and west of Scotland. In 1986 and 1987, restrictions were imposed on approximately 10,000 farms, of which 2,144 were in Scotland alone. Restrictions in June 1986 covered 5,100 farms in North Wales, about 120 in Northern Ireland and 1,670 in Cumbria in England.

It is estimated that compensation to all the sheep farms affected in Great Britain has cost British taxpayers £13m.

Today, 386 British farms are still under restriction. According to the British governments Department of the Environment, Food and Rural Affairs, or Defra, these include nine farms in Cumbria with 11,500 sheep, 359 farms in Wales with 180,000 sheep and 18 farms in Scotland with 38,000 sheep. All farms in Northern Ireland were derestricted in 2000.

In restricted areas, sheep have to be monitored with a Geiger counter before they can be sold to prevent contaminated meat from entering the foodchain.

The caesium-137 threshold in sheep is 1,000Bq/kg. Sheep with levels of radioactivity of 1,000Bq/kg and above are marked with an indelible paint and moved from the upland fells to lower ground because the fells have a higher caesium-137 content then lowland areas due to the soil’s peat content. The sheep are checked again a few weeks later. When radioactivity has fallen below 1,000Bq/kg, sheep can be sent for market for slaughter.

Officials from the Carlisle office of Defra regularly visit Cumbrian farms to test sheep for radiation picked up from the contaminated fells. But the outbreak of foot-and-mouth disease in 2001 has held up the monitoring of livestock, however, as sheep could not be moved off the restricted area without monitoring there was no risk of sheep above the limit being allowed into the foodchain.

In a telephone interview with Bellona Web Tuesday, Dr Jillian Spindura, Senior Scientific Officer at the Radiological Protection and Research Management Division of the British governments Food Standards Agency, said: despite the outbreak of foot-and-mouth, which complicated livestock monitoring for derestriction purposes, the number of restricted farms has fallen in recent years, although most of the remaining farms with higher levels of contamination are not likely to be derestricted in the near future.

Besides, [European Union] enlargement in 2004 could see the caesium-137 threshold change because new entrants would have their livestock included in the expanded market. This might see the threshold fall to a level of, say, 600Bq/kg that would make the de-restriction of some British farms more unlikely in the near future, Dr Spindura continued.

The EU position and the possibility of new international guidelines on the levels of radionuclides in food is complex and no actual proposed levels have yet been put forward, although discussions are taking place. It is difficult to say if and when new limits would apply.

Chernobyl-type reactors still in use
Chernobyl reactor No. 4 was a RBMK-1000 nuclear reactor, which is widely regarded as the worlds least safe nuclear reactor because of its technical design and because the graphite in the reactor core is combustible.

Ukraine and Lithuania still operate RBMK-1000 reactors at the Chernobyl and Ignalina plants respectively. The European Commission, or EC, considers RBMK reactors to be "non-upgradeable", meaning that minor design and operation changes will not offset the safety problems of the reactor design. As such, considerable international financial assistance has been made available to assist the closure of the remaining RBMK reactors.

Euratom and Kursk reactor No. 5
Earlier this year the EC prepared a Non-Paper — entitled Responses to questions raised in the Meeting of Financial Counsellors of Permanent Representatives of 10 December 2002 — for the European Council that included a list of known projects in the beneficiary countries of the Euratom loan facility. The Non-Paper was distributed to European Union Member States before being leaked to the press.

The Non-Paper was shown to contain wording relating to the use of Euratom loans to complete the construction of a RBMK-1000 reactor at the Kursk plant in Russia.

The Kursk plant is located in Kurskaya Oblast, 500km south of Moscow. The plant is run, owned and operated by Rosenergatom, a subdivision of the Russian Ministry of Atomic Energy, Minatom. The Kursk plant has four RBMK-1000 reactors in operation; two first generation and two second generation.

The Kursk plant has the highest reported number of RBMK-related incidents. Until the end of 1995, 230 incidents were reported involving hazardous substances. The International Atomic Energy Agency investigated security at the Kursk plant in 1992 and again in1995, recommending numerous actions be taken to improve safety. Construction on reactor No.5 started in 1985 but is not progressing as planned due to a shortage of funds.

Given Chernobyl’s radioactive legacy is still around 17 years after the accident, Kursk No.5 should not be completed. And for the sake of the environment and public health all remaining RBM reactors should be closed down as soon as possible.