Works on Kursk go quite slow

However, it is decided to go on. The Russian deputy premier, Ilya Klebanov, and vice-admiral Mikhail Motsak have disagreed concerning the person who should make a decision about lifting the Kursk.

Published on October 2, 2001 by Viktor Khabarov 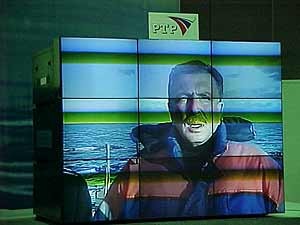 Today at 17:30 local time the TV-link again connected Ilya Klebanov in the Barents Sea with the press-centre in Murmansk. The Russian deputy premier said that the divers began to install grappling devices on the fourth compartment in the evening. The work goes slow and hard due to the weather conditions, but after meeting with the specialists onboard Mayo barge it was decided to go on, Mr. Klebanov added.


The Russian vice-admiral Mikhail Motsak said that the Mammoet general manager Michael Deli should make the decision about the precise date and time. Ilya Klebanov added that despite the responsibility of one person the decision itself would be made together with the others. He also said that despite the weather conditions they would try to lift the submarine on October the 4th, and transport it to the dock on October the 7th.


The chiefs of Mammoet and Smith International arrived at Murmansk today in order to visit Mayo barge. However, the weather conditions do not allow the helicopter to reach the salvage area. The Rubin specialists and the military also have failed to reach Mayo.