Sergei Yastrzhembsky, President Putin’s press advisor, would like to bring Bellona to the location of the Kursk submarine in order to clear away any possible objections from Bellona, regarding the raising of Kursk. 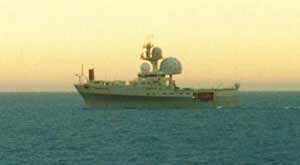 At a press conference in London, Sergei Yastrzhembsky expressed his wish to bring the Norwegian environmental foundation Bellona as an observer during the ongoing work with the raising of the nuclear submarine Kursk, in the Barents Sea.

– Personally, I believe that representatives of Bellona should be invited, so that we can solve possible objections that Bellona would still have.

Yastrzhembsky said this as a reply to the question asked by an Interfax journalist, about why Russia was unwilling to let representatives of The Norwegian Radiation Protection Authority to take part in observing the raising of Kursk.

The Norwegian Radiation Protection Authority has repeatedly, through the Norwegian Department of Foreign Affairs, asked permission to bring representatives who can measure any possible nuclear discharge in the Barents Sea. An area of 40 x 40 nautical miles surrounding Kursk has been closed off. At the moment the Norwegian military intelligence vessel F/S Marjatta stays close to the border of the enclosed area. Ever since the salvation operation of Kursk began in July, F/S Marjatta has stayed close to this area, with one exception on Monday, when the vessel went back to the port of Kirkenes for a few hours. 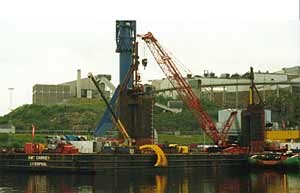 Dialogue on risk analyses
This summer the environmental foundation Bellona has had a dialogue with the Russian embassy in Oslo, regarding the risk analyses on the Kursk salvation operation, which is presently taking place in the Barents Sea. The risk analyses is prepared by the Rubin institute in St Petersburg, who also have the professional responsibility, on the Russian part, in the raising of Kursk. At the place of average, holes to fasten the lifting wires are still being drilled. So far, 15 out of 26 holes on total have been prepared. Last weekend, the divers working on Kursk had to suspend the work because of rough weather conditions, but the weather has now improved and the work has been resumed.

The enormous cutting saw that will be used in cutting off the torpedo compartment in front of Kursk, is still alongside quay in Kirkenes. However, the technical problems connected to the saw are now solved and by the end of this week the barge carrying the cutting equipment will head for the Barents Sea.