Sanctions imposed against Moscow for its invasion of Ukraine have not hampered the decommissioning and dismantlement of retired nuclear icebreakers, Russian officials said at a conference last week, though western experts cautioned that such rosy claims were unlikely to last.

Published on December 1, 2022 by Anna Kireeva, translated by Charles Digges 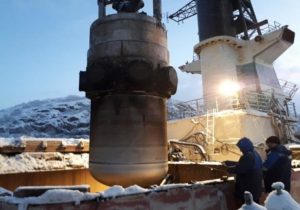 Unloading a reactor at the Nerpa shipyard.

Sanctions imposed against Moscow for its invasion of Ukraine have not hampered the decommissioning and dismantlement of retired nuclear icebreakers, Russian officials said at a conference last week, though western experts cautioned that such rosy claims were unlikely to last.

The icebreakers in question — the Arktika and the Sibir — were long stalwarts of Russia’s civilian nuclear fleet, which is the largest in the world. They were decommissioned to make way for two newer icebreakers of the same name, though their safe dismantlement was in question as more and more of the Russian budget goes to finance the war.

Now Russian officials say the Sibir has been completely dismantled and its radioactive remains disposed of, predicting that the Arktika will follow the same path.

But Bellona’s Alexander Nikitin said that nuclear decommissioning work in Russia was unlikely to continue at such a tempo.

“Sooner or later, sanctions will begin to affect Russia, including projects for the dismantling of nuclear ships and the management of radioactive waste,” he said. “In this uncertain period, we are unlikely to hear from anyone in leadership that the war is having a negative impact on the operation of their enterprises. Therefore, despite the peppy statements of various leaders, we must continue to carefully monitor the process of dismantling nuclear ships and the safety of these operations.”

Nikitin also noted that the bulk of machinery Russian uses to dismantle its decommissioned icebreakers was supplied by foreign governments in the 1990s. That equipment is now getting old, he said — and foreign governments are unlikely to help replace it while the war in Ukraine continues.

In October 2016, the Sibir was transferred from Atomflot, the Murmansk-based icebreaker headquarters to the Nerpa shipyard, where dismantling and unloading of the reactor compartment equipment were carried out. This dismantled equipment was then transferred to special packing that was transferred to Sayda Bay for long-term storage.

According to Alexander Malyshkin, a leading specialist in the service of nuclear steam generating plants, dismantlement and target programs at Atomflot, no one has ever performed such work.

But Malyshkin said that certain elements of the vessel were still radioactive after dismantlement, including the ventilation system and pipelines. As a result, the ship was transferred back to Atomflot in 2019, where additional procedures were carried out to rid it of contamination, which finally occured in 2021.

After the remains of the vessels are evaluated by a third party contractor, Atomflot will sell them for scrap. In August, Rostekhnadzor, Russia’s nuclear oversight body, terminated the vessel’s license and certified it was no longer a radiation source.

Meanwhile, work to dismantle the Arktika continues, said Malyshkin. The vessel operated from 1975 to 2008 and was finally greenlighted for dismantlement in 2018 at Nerpa.

The dismantlement procedures have gone mostly as they did for the Sibir. But Malyshkin noted that the lower sections of one of its reactor compartments remains contaminated.

“The Arktika will show us whether we can deactivate it from surface non-removable beta contamination,” said Malyshkin. “If we can, we will be guided by the concept of unloading all equipment. It’s cheaper. Now there is an experimental decontamination of all premises. At the end of December, we will receive a conclusion on whether it is possible to deactivate the Arktika afloat in the same way as the Siberia. If this does not work out, we will have the only option left – putting it on the slipway on the Nerpa, cutting it into pieces, sending the dirty pieces to Sayda, and the clean ones for scrap metal.”

Currently, work is underway to decontaminate those parts of the Arktika that could not be decontaminated at the Nerpa shipyard.

International cooperation on safely storing the Lepse — a former nuclear icebreaker service ship that was one of the most radioactive vessels — began in 1994. But the main  work of dismantlement began only in 2011.

In 2014, the ship was transferred to Nerpa where it was divided into its bow and stern sections, with the stern section sent to Sayda Bay for long-term storage. In 2018, the bow section, which contained decades of spent nuclear icebreaker fuel, was enveloped in a special protective shelter for extraction of the fuel assemblies,

In 2019 and 2020, 620 of those fuel assemblies were unloaded from the Lepse and transported to Atomflot on a special ship. From there they were sent to the Mayak reprocessing facility in the Ural Mountains by rail. The price tag for the operation, not counting the special radiation shelter and waste handling, was under one billion rubles, or $16 million.

However, some 19 damaged and deformed spent fuel assemblies remained in the vessel, and were not removed until summer of 2021, arriving at Mayak this year.

Within the budget for the program was the construction of special storage equipment for spent fuel assemblies at Sayda Bay in 2022. In 2023, the remains of the Lepse’s bow will be transported to Sayda Bay. And in 2024, work will be complete on securing the radioactive waste that emerged as a result of unloading the spent fuel, the funding for which has already been earmarked.

This leaves two vessels in the berths of Atomflot that are awaiting dismantlement – the icebreakers Rossiya and Sovietsky Soyuz. The dismantlement of both is planned before 2030.