It won’t come as a surprise that radioactive contamination is a major headache facing the government of Ukraine, the country that inherited the Chernobyl nuclear power plant after the Soviet Union collapsed in 1991.

Published on September 22, 2021 by Charles Digges

One of the dilapidated buildings at the Pridnieprovsky Chemical Plant in Central Ukraine. Credit: Bellona

It won’t come as a surprise that radioactive contamination is a major headache facing the government of Ukraine, the country that inherited the Chernobyl nuclear power plant after the Soviet Union collapsed in 1991.

What is surprising is that much of that contamination is no longer coming from Chernobyl at all. Instead, it originates at a site that’s remained largely unknown to the outside world – and that poses, according to some experts, an even graver danger than the ghosts of the world’s most famous nuclear disaster.

To reach it, you travel about 10 hours by road to the southeast from the Chernobyl site near the Belarussian border into center of the country. There, along the banks of the Dnieper River, lie the neglected remains of one of the Soviet Union’s largest nuclear weapons production factories and uranium mining facilities.

It’s called the Pridnieproskvy Chemical Plant and it now houses more than 15 times the amount of radioactive waste to be found within the rubble of Chernobyl’s No 4 reactor, which exploded in 1986.

Much of this waste lies in the open air, wholly unshielded from humans and the environment, or marked off by patches of fencing that gives no warning about what it encloses. In other places at the site, long neglected waste from uranium processing, called uranium tailings, emits toxic gasses and leaks into ground water and waterways.

For the past three decades, the PCP has been only sporadically policed, with Ukrainian government efforts aimed at its cleanup both insufficient and poorly funded. Foreign governments have tried to pitch in, but their financing has been directed at issues that fail to address the problem as a whole.

The result is a patchwork of quick fixes performed by a shifting cast of government contractors operating with little coordination. None of these efforts have served to make this enormous Cold War castoff any safer. 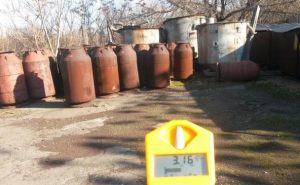 High radiation levels are recorded around radioactive waste stored in the open air at the plant. Credit: Bellona

“In Bellona’s opinion, this project is, for the moment, in the fog,” says Alexander Nikitin, who heads Bellona’s St Petersburg office. “It’s impossible to figure out what has actually been done, what the situation at the PCP is, who is responsible and overseeing the project, and what its prospects are.”

That’s bad news for the 230,000 residents of Kamianske, the river port town closest to the once secret facility, who, as studies show, have long confronted the effects of the plant’s contamination. The radioactive pollution also has the potential to reach farther down the Dnieper River, one of Eastern Europe’s most important waterways, which flows past the plant to the Black Sea.

The situation for some 1,000 workers at the site is just as grim. Since the site as a whole isn’t under the control of any Ukrainian state nuclear regulators, measures shielding this staff from radiation exposure are nearly nonexistent. As a result, their health is jeopardized throughout the workday.

The Pridniprovsky Chemical Plant began operations in 1947, becoming the biggest producer of yellowcake in the Soviet Union. In its prime, it reprocessed 65 percent of all uranium ore used within the empire. In 1991, the year the Soviet Union was dissolved, the plant abruptly ceased operations and virtually no plan was made to secure its radioactive heritage.

It wasn’t until 2000 – nearly a decade after Ukraine’s independence – that a state-financed group called Barrier, operating under the supervision of Ukraine’s Ministry of Energy and Coal, took control some of the plant’s contaminated sites and buildings. Other parts of the plant’s territory were divided among other private companies and state enterprises. Eventually, in 2007, the Pridniprovsky Chemical Plant was declared bankrupt and much of its property was auctioned off.

The remaining radioactive waste was transferred to Barrier’s control and is now divided into tailings several tailings dumps, vulnerable to leakage as radon gas and exposed to the elements. None of the sites are protected at anywhere near international radiation safety standards.

Altogether, some 250,000 square meters of the former plant are contaminated with radionuclides. Another 20 buildings on the site that were used to produce yellowcake also remain highly contaminated.

But whose responsibility all of this is remains an open question.  The Ukrainian government has spent millions of dollars on various projects aimed at bringing the contamination under control, but none have led to significant improvements. 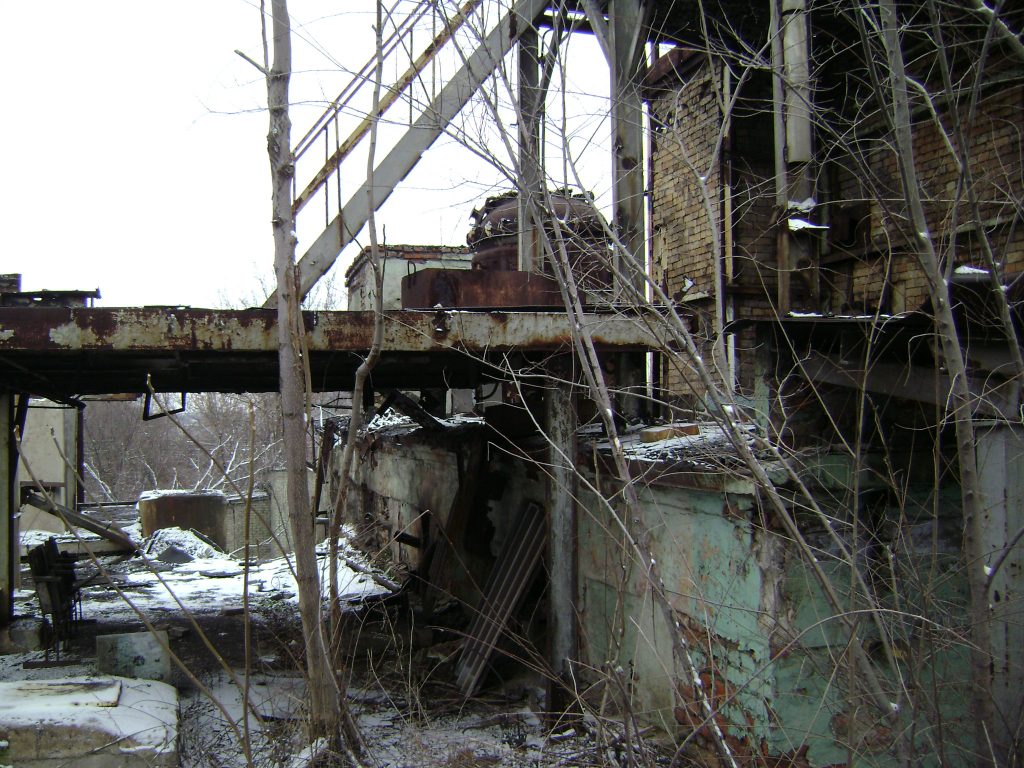 Another neglected structure at the plant. Credit: Bellona

It was as late as 2003 that Ukraine’s Cabinet of Ministers adopted an 11-year program geared toward bringing the Pridniprovsky Chemical Plant into an environmentally safe state, with the aim of protecting local residents from the harmful effects of ionizing radiation.

That program was followed by another in 2009, which is still running today – at least at the legislative level. But its implementation has been chaotic, and Ukrainian nuclear officials criticized the Ministry of Energy and Coal for failing to monitor the activities of Barrier properly. By 2018, Barrier itself ran out of state funding and audits found that it had misapplied funds, leading to a number of criminal cases.

That state program was revived briefly in 2019, but when the pandmeic hit, the funds allocated for it were redirected to the struggle with Covid-19.

A number of international funders have arrayed to assist rehabilitation projects at the plant, among them Sweden, Norway the International Atomic Energy Agency and the European Union, and most of these remain in various stages of completion. The EU, primarily, has spent €10 million on developing a strategy for decontaminating and rehabilitating the site.

Another EU project from 2017 aimed at bolstering radiation protection at the site, as well as overseeing security and emergency measures remains ongoing.

What comes of the Pridniprovsky plant now is still an open question. The lack of any state-guided strategy has led to squandered resources and a failure of continuous development across the various programs that have been attempted. Because of program interruptions, coupled with unstable funding and weak management, carrying out continuous radiation monitoring at the site has been nearly impossible.

“Based on  our experience, Bellona recommends that the Ukrainian government must essentially start over to implement this project and take several important steps.” says Nikitin.

First, the government in Kiev must adopt a long-term strategy geared toward rehabilitating the entire territory of the Pridnieprovsky Chemical Plant that encompasses several stages. At the first stage, Ukraine needs to determine what organization or structure should be responsible for implementing this program.

Then, a budget must be calculated. Once that is fixed, the government must ensure that funds allocated cannot be reduces or channeled for other purposes.

In addition, it is necessary to prepare and approve a roadmap for the project and establish a set of deadlines. And the government should avail itself of the numerous international organizations that are ready to assist.

For further questions on the Prindnieprovsky Chemical Plant, contact Vladislav Nikiforov at: vlad@bellona.no

Read our report on the Pridnieprovsky Chemical Plant