Rosatom, Russia’s state nuclear corporation, will this month begin work at the future site of a small-scale nuclear power plant in the far eastern Siberian territory of Yakutia, Alexei Likhachev, the company’s head, said in a video message in late December.

Published on January 11, 2021 by Charles Digges 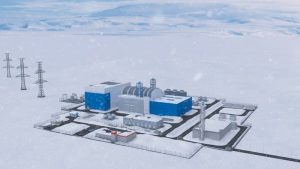 Rosatom, Russia’s state nuclear corporation, will this month begin work at the future site of a small-scale nuclear power plant in the far eastern Siberian territory of Yakutia, Alexei Likhachev, the company’s head, said in a video message in late December.

Rosatom reports it has reached an agreement with Yakutia’s regional government laying out parameters for pricing energy that will be produced by the nuclear plant, which is expected to be completed by 2028 in Yakutia’s Ust-Yansky district.

The new plant builds on momentum the company established with the Akademik Lomonosov, one of the world’s first floating nuclear power plants, which Rosatom has been advertising as a power solution for remote coastal locations. The floating plant began commercially producing electricity in the Chukotka region, which neighbors Yakutia, early last year. The Yakutia plant develops that thesis further by aiming to bring smaller scale reactors to far flung places on land.

It also capitalizes on a new international impulse toward small modular reactor (SMR) development – a field thought to be worth some $300 billion over the next 20 years, according to some estimates by Canadian energy officials. During the closing days of 2020, Canada released a comprehensive action plan for such reactors. The United States and the United Kingdom have also unveiled national support for developing the technology.

As such, Likhachev was keen to couch Russia’s SMR development as aimed at some of these same foreign audiences.

“An important aspect of our foreign practices is that Rosatom always follows the principle: first we build in our own country and only then offer technology to the market,” said Likhachev in his December statement.  “Today, only the Russian Federation can offer such cutting-edge and referenced technology. There is no doubt that SMR power plants have a big future, both in our country and abroad.”

The backbone of the Yakutia plant, according to materials released by Rosatom, will be the RITM-200 reactor, a 50-megawatt unit that Russia is debuting on its most recent line of new-generation nuclear icebreakers. One has already gone into service aboard the Arktika nuclear icebreaker, the lead vessel in the 22220 Project icebreakers, four more of which are under construction at the Baltic Shipyard in St Petersburg.

Rosatom claims these reactors are an improvement on the KLT-40 reactor type, which powers the Akademik Lomonosov, and has also long been used for nautical purposes. The RITM-200s, the company says, feature compact design, modularity, a short construction period, and high safety standards, with a service life or more than 60 years. The group said the SMR nuclear plant also can produce low-carbon hydrogen, which could be used in various industries.

Under the agreement Rosatom inked with the region, Yakutia will use some 40 to 50 Megawatts of electricity produced by the plant and will assist the nuclear corporation in siting the facility. Rosatom says electricity costs in the cold northerly area will be halved after the plant become operational.

The plant will replace power generation from both coal-fired and diesel-fueled facilities in Ust-Yansky District. The construction project is expected to create as many as 800 jobs, Rosatom said.