The fourth reactor at the Rostov nuclear power plant, 1000 kilometers to Moscow’s southwest, has been shut down due to a crack in a pipe connected to its emergency cooling system, Russian officials have said.

Published on October 5, 2020 by Charles Digges 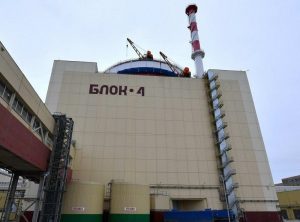 Reactor No 4 at the Rostov nuclear power plant. Credit: Rosenergoatom

The fourth reactor at the Rostov nuclear power plant, 1000 kilometers to Moscow’s southwest, has been shut down due to a crack in a pipe connected to its emergency cooling system, Russian officials have said.

Though the fault poses no danger to the reactor’s normal operations, officials say they shut it down while the system is undergoing repairs out of an abundance of caution and expect the unit will go back online soon.

Yet early public statements on the shutdown from the plant were incomplete and came days after the fault was discovered. It was only when speaking with Bellona that officials from Russia’s nuclear utility specifically acknowledged the problem with the emergency cooling system.

On September 29, the plant put out its first statement about the shutdown, saying Rostov’s No 4 reactor had been disconnected from the electricity grid for routine maintenance on thermal and mechanical equipment. The statement, which was published on the plant’s official website, indicated the shutdown had occurred on September 26, three days earlier.

The release made no mention of a crack that was discovered on a pipe that feeds water into the reactor’s emergency coolant system – a system that kicks in should the reactor’s primary cooling system fail.

As often happens during incidents withing the Russian nuclear industry, it was accounts of the incident posted to social networks and anonymous statements to the media that eventually established that the plant’s release was incomplete.

One such account stated that: “During a routine inspection of the reactor, engineers discovered a through defect (crack) on the adapter of the emergency feed water pipe entering the steam generator from the emergency water supply system.

The semi-official version doesn’t contradict the initial statement from the plant, as the emergency water supply for the steam generator can be classified as “thermal and mechanical equipment.” But it nonetheless made clear that the plant’s original statement was leaving something out.

A reactor’s steam generator is a barrier between the first reactor cooling loop and the second loop, in which steam drives the turbine of the power unit. During a failure of the primary cooling system, it is necessary to supply water to the steam generator from emergency tanks via this emergency pipes.

“During the planned walk-around, a crack with a length of 36 millimeters was found,’ he said. “The crack was on the branch pipe of the emergency cooling system of the steam generator, that is, in the system that is used when it is impossible to supply water to the steam generator with standard systems. It has nothing to do with the reactor and the primary circuit. The reactor plant could continue to operate, but out of caution we decided on repairs. The new connection has already been installed. The power unit will soon be operational.”

Equipment defects can cause accidents and incidents at nuclear power stations, but this time there was no danger. The only consequence of this incident turned out to be downtime for the reactor.

Rostov’s unit 4, which is a VVER- 1000/320, came online to great fanfare in February 2018. It was launched by Vladimir Putin via video link and lauded by Alexei Likhachev, who heads Rosatom, Russia’s state nuclear corporation, for breaking a number of construction records. The reactor supplies 1030 megawatts of power, which is more than that produced by standard VVER-1000 reactors.